DragonKing Member Posts: 1,866
February 24 edited February 24 in Off-Topic
Has anyone been keeping up with the Coronavirus? I've been following it and the more information that seems to come out about this thing the more it seems like its a pandemic that we continue to refuse to acknowledge. China has all but isolated itself to try and control this thing, unsuccessfully I might add, but hey they have been lying all the way up to the point where conflicting information from china itself is claiming that the virus isn't from where they originally claimed it was from.

*nerd moment comment*
Just the stats and traits on this this thing...
So far from what I've seen;

It can have up to a 24 day incubation period.
(https://www.msn.com/en-gb/news/newslondon/coronavirus-incubation-period-can-be-up-to-24-days-scientists-find/ar-BBZRo8l)

It can be transmitted and caught through our freaking eyes... HEY MARVEL, X-MEN THIS ISH!
(https://forums.beamdog.com/post/discussion/off-topic)

it is extremely viral it literally doubled in South Korea... over night...
(https://abcnews.go.com/International/coronavirus-patient-numbers-double-overnight-south-korea/story?id=69100643)

There is a patient 0, with a untraceable strand of it somewhere we don't know about
https://www.thesun.co.uk/news/10873496/coronavirus-vaccine-china-wuhan-race-find-patient-zero-killer-bug/

Despite what media has been saying, The Coronaviruas IS actually more dangerous than the flu...

The US CDC reports typical flu mortality at 0.1%; current reports of the 2019-nCoV coronavirus at 2% or 20x higher.
IT has been reported o be much more infectious than SARS and MERS, and also much more infectious than recent versions of the flu.
It has a longer incubation period than the flu allowing it to spread unnoticed. See above
Infected individuals may spread the virus, while remaining symptom free for long periods, making it difficult or impossible to identify carriers, and making quarantines ineffective.

Oh and idiot politicians and government officials breaking both the possibly effected, AND FREAKING CONFIRMED EFFECTED back into the country instead of keeping there they are and making sure they are comfortable/well taken care of there until we have better understanding on how to combat it!


Counties are closing their freaking boarders, locking down towns and even denying access to certain groups of people to try and protect against it!

can't find the article about the tpurist trying to travel to rest stops but getting denied.

It is estimated that at its peak, it could reach 60% of th worlds population. I read elsewhere that its suppose to peak around April and May; then decline... I always said I would die by the time I hit thirty, maybe I should play the lottery.
https://www.thesun.co.uk/news/10937990/coronavirus-infect-60-percent-worlds-population/

Also, I went through all this without taking a single jab at a specific political party and their arguments about a specific concept that separates territories. Please don't politicize this. I"ve already had one topic that was suppose to be for fun get locked because of how close it was to political nature when it was meant to just laugh at the actual event happening. 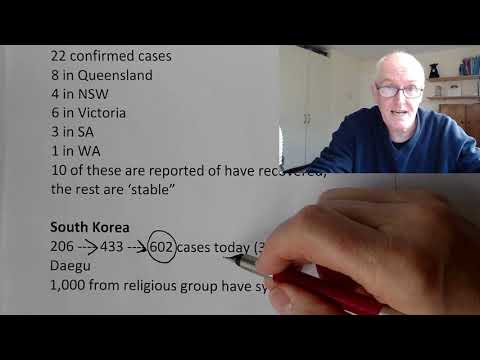