Dorn It: BGEE and BG2EE with Dorn as the protagonist

jmerry Member Posts: 2,813
March 15 edited March 15 in Challenges and Playthroughs
This is the tale of a run with Dorn as the protagonist, enabled through console trickery. Patch 2.6, insane difficulty but no increased damage, unmodded except for my personal tweaks. In BGEE, this is an informal "stuff in override" version. In BG2EE, this is the released (2.0) version of my tweak mod.

Posts will be M/W/F, aside from this first post on the infamous Ides of March.
Prologue: Poor Sod, taking the dirt nap so soon.

We do not open our tale with Dorn. Instead, we start with a poor sod. Well, he started out poor. 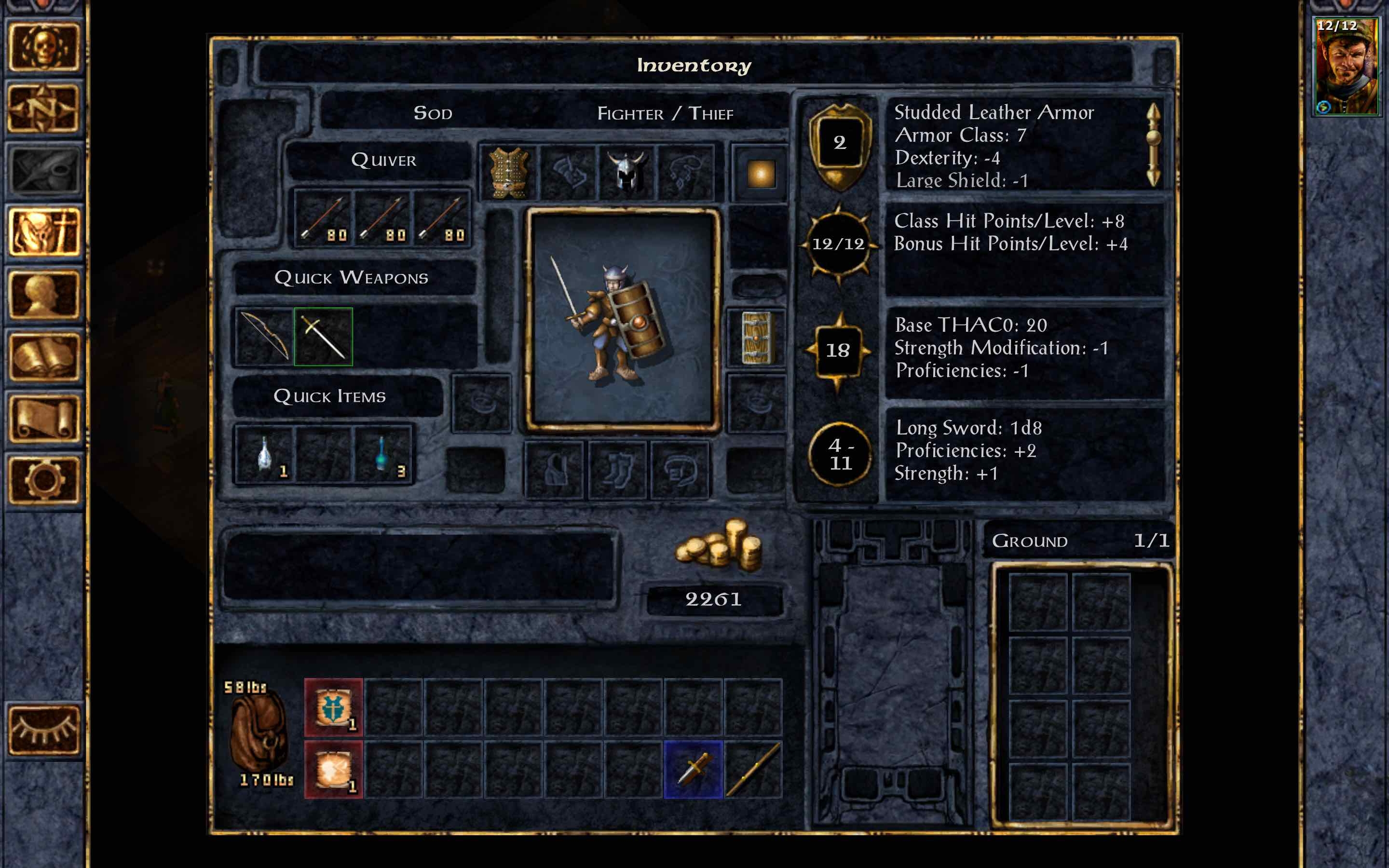 Sod has been optimized for looting Candlekeep (halfling fighter/thief, 18 charisma, enough Open Locks for that one chest), so he's actually rather wealthy by the time he hits the road. He does suffer from a lack of intelligence and wisdom, though. And his poor judgment will come back to haunt him.

After Gorion's death, Imoen joins. A wolf goes down cleanly, but a pack of dogs on the way to the crossroads is more troublesome, and Imoen takes a nasty hit. 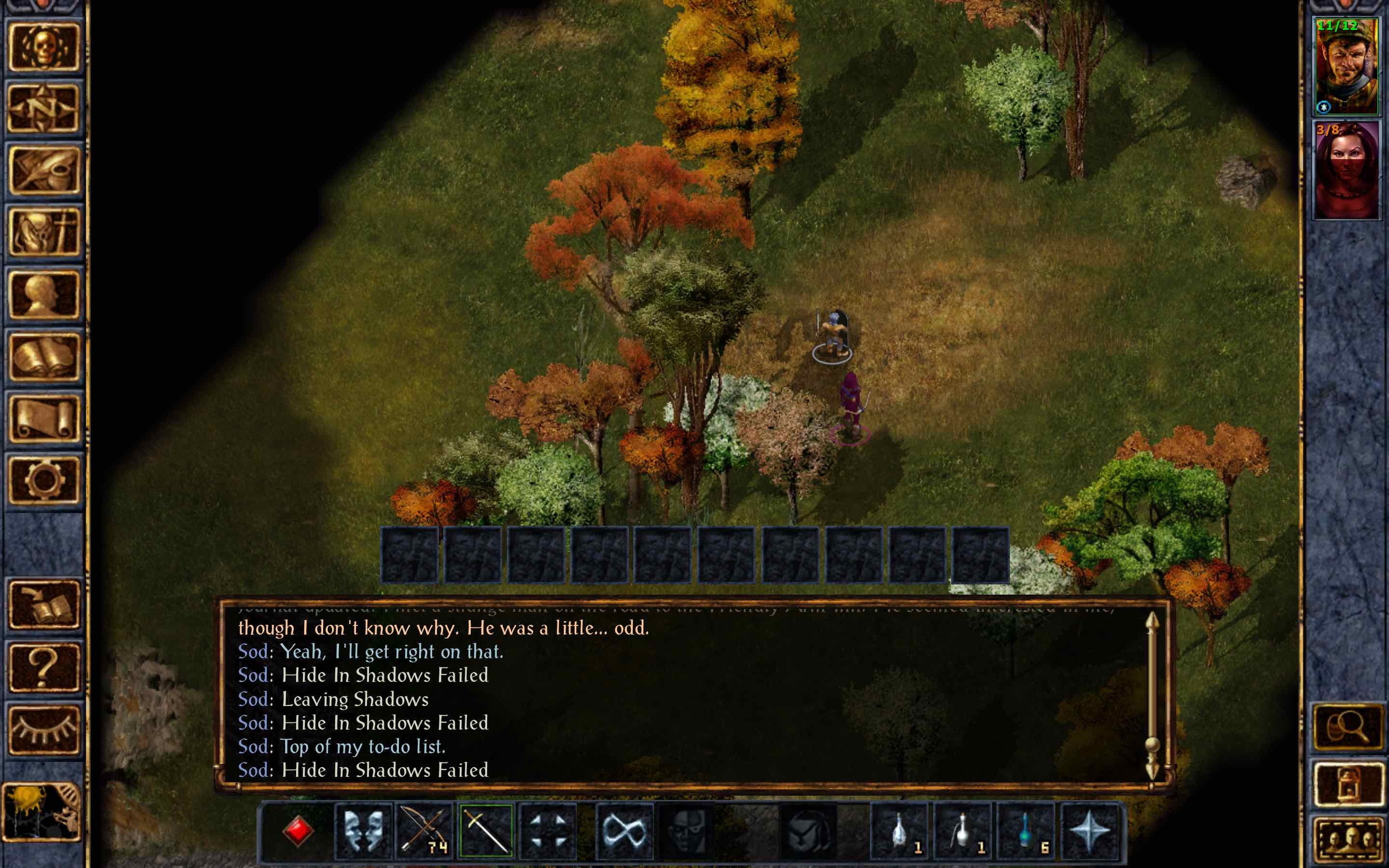 Still, the pair press on. Healing is best done in a safe place.

At the Friendly Arm itself, Imoen decides to stay and rest in one of the outbuildings. 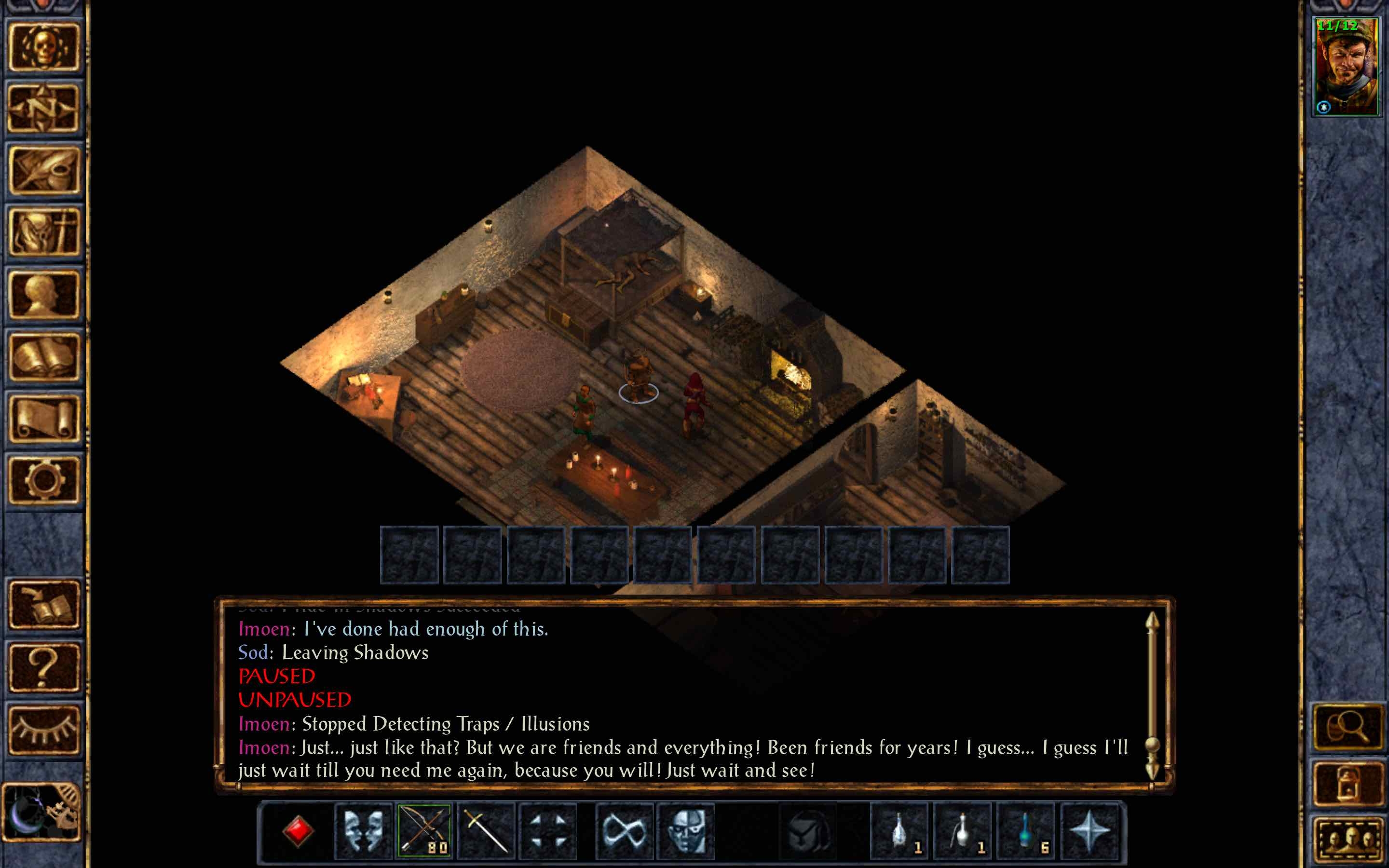 Sod, however, continues forward to sneak in to the main building, past a suspicious character. 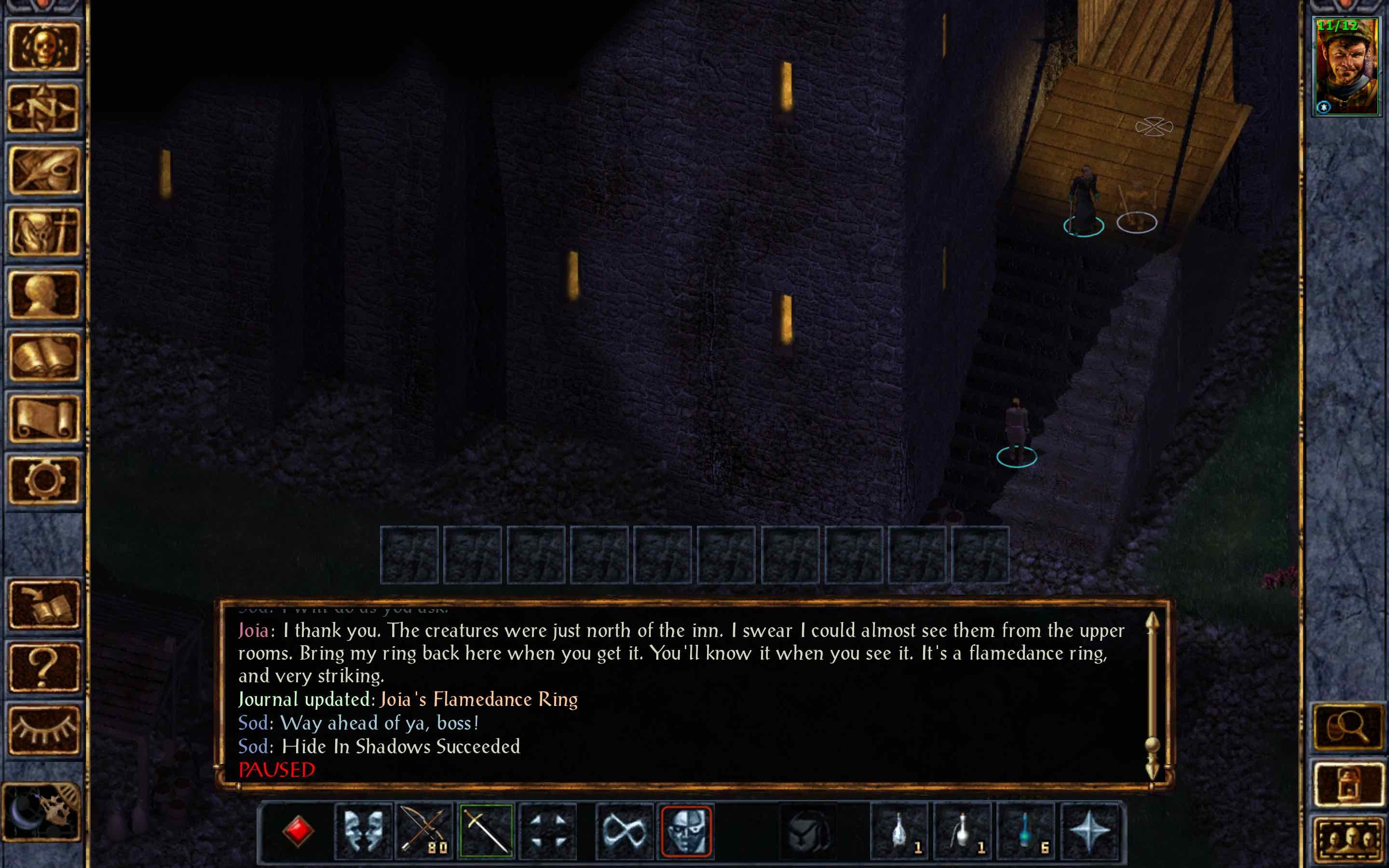 Inside, he meets the most fascinating character. 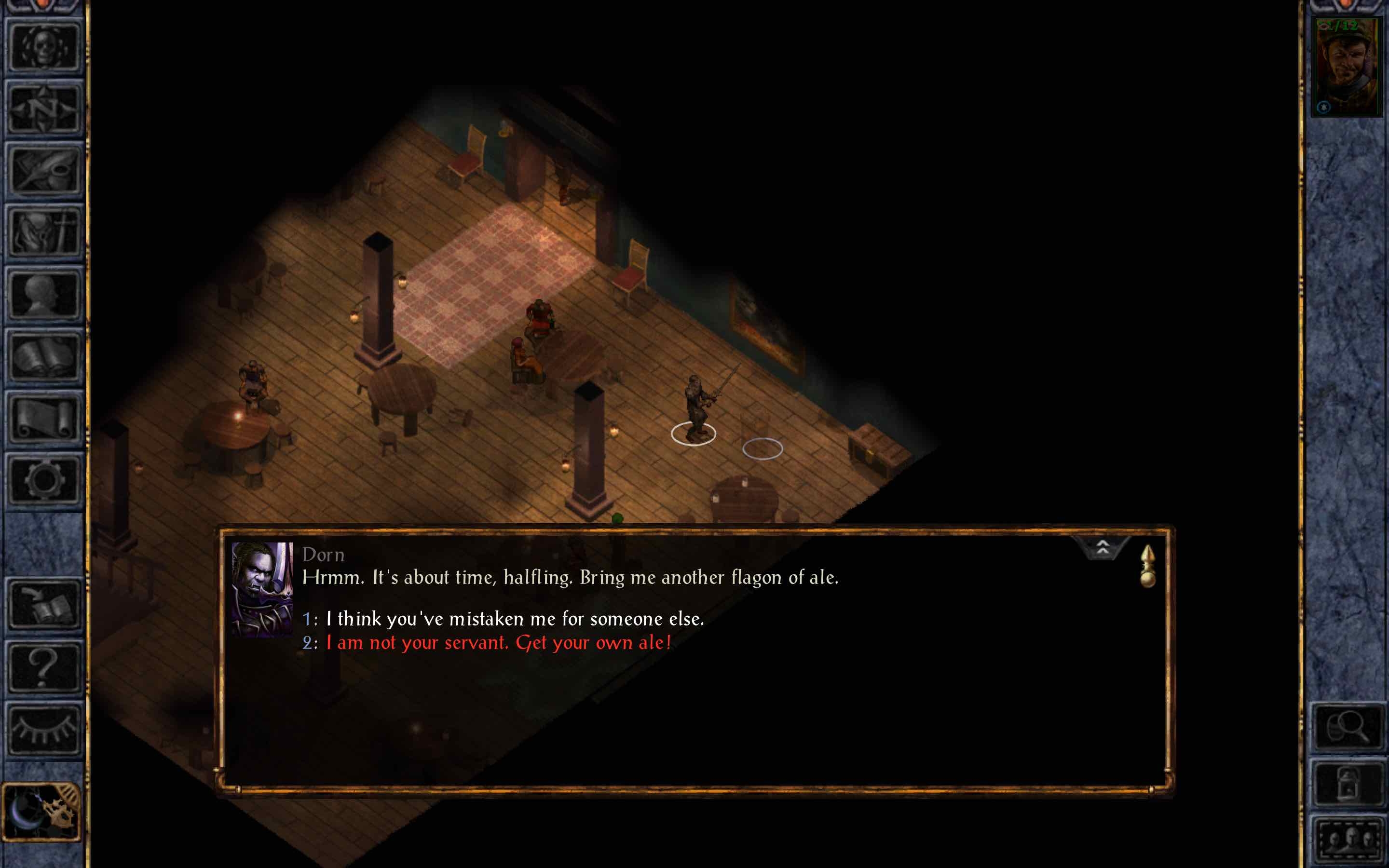 Or perhaps it is the other way around. Plans are made...

Sod talks to some people upstairs, acquiring some antidotes and pants. 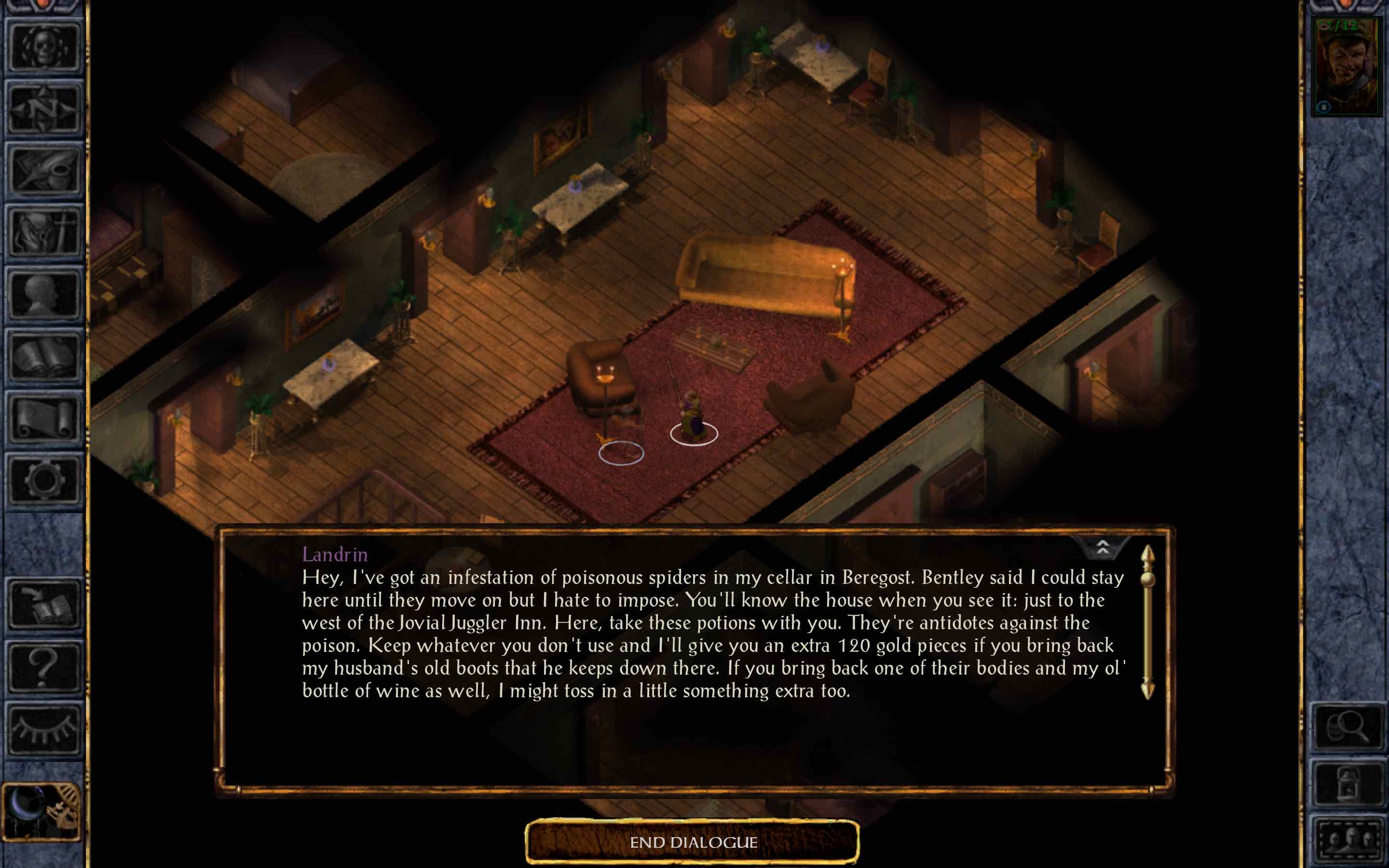 After that, he sneaks out again to head to Beregost, and is lucky enough to filch a cloak on the first try. 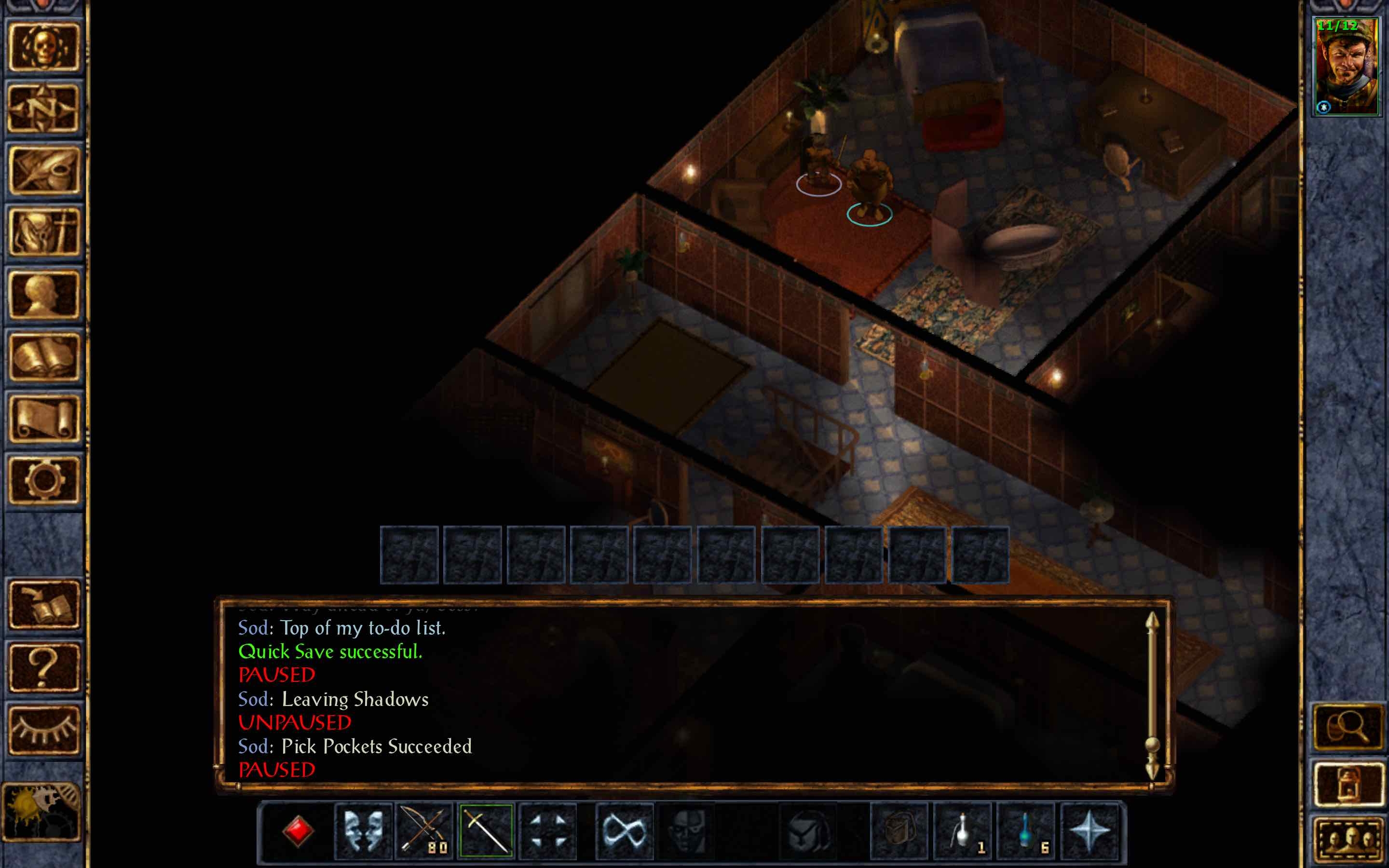 (Well, actually, I did that in the other order - which meant sneaking in and out of the Friendly Arm an extra time.)

With all that done in the north, Sod heads south to Nashkel, avoiding all conflict. Until Dorn returns. 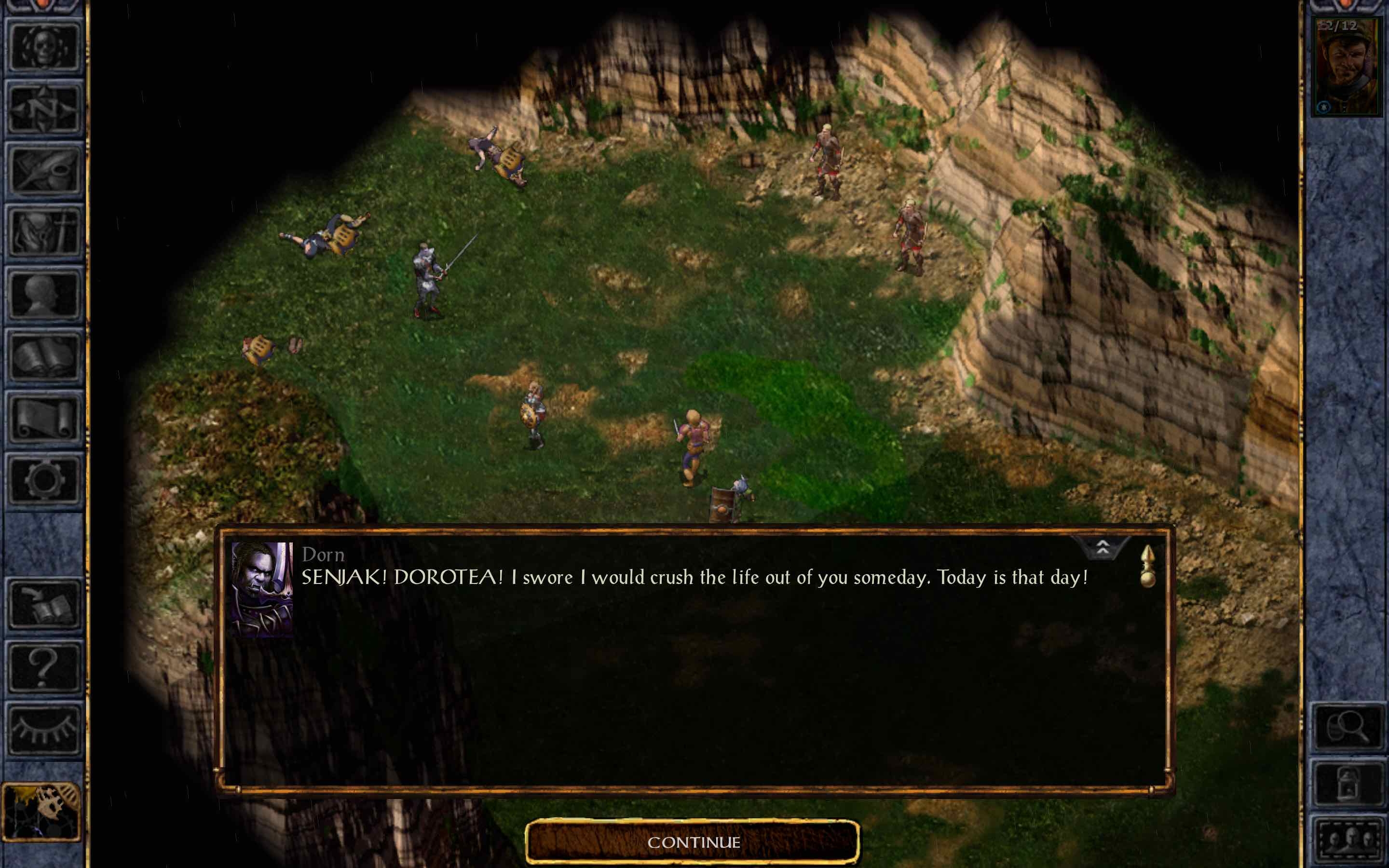 A fight ensues, Sod and Dorn against Senjak, Dorotea, and their bandits. Sod breaks a sword on one of the bandits, and Dorn misses his first nine attacks against the plate-armored Dorotea. Until he finally rolls a crit. 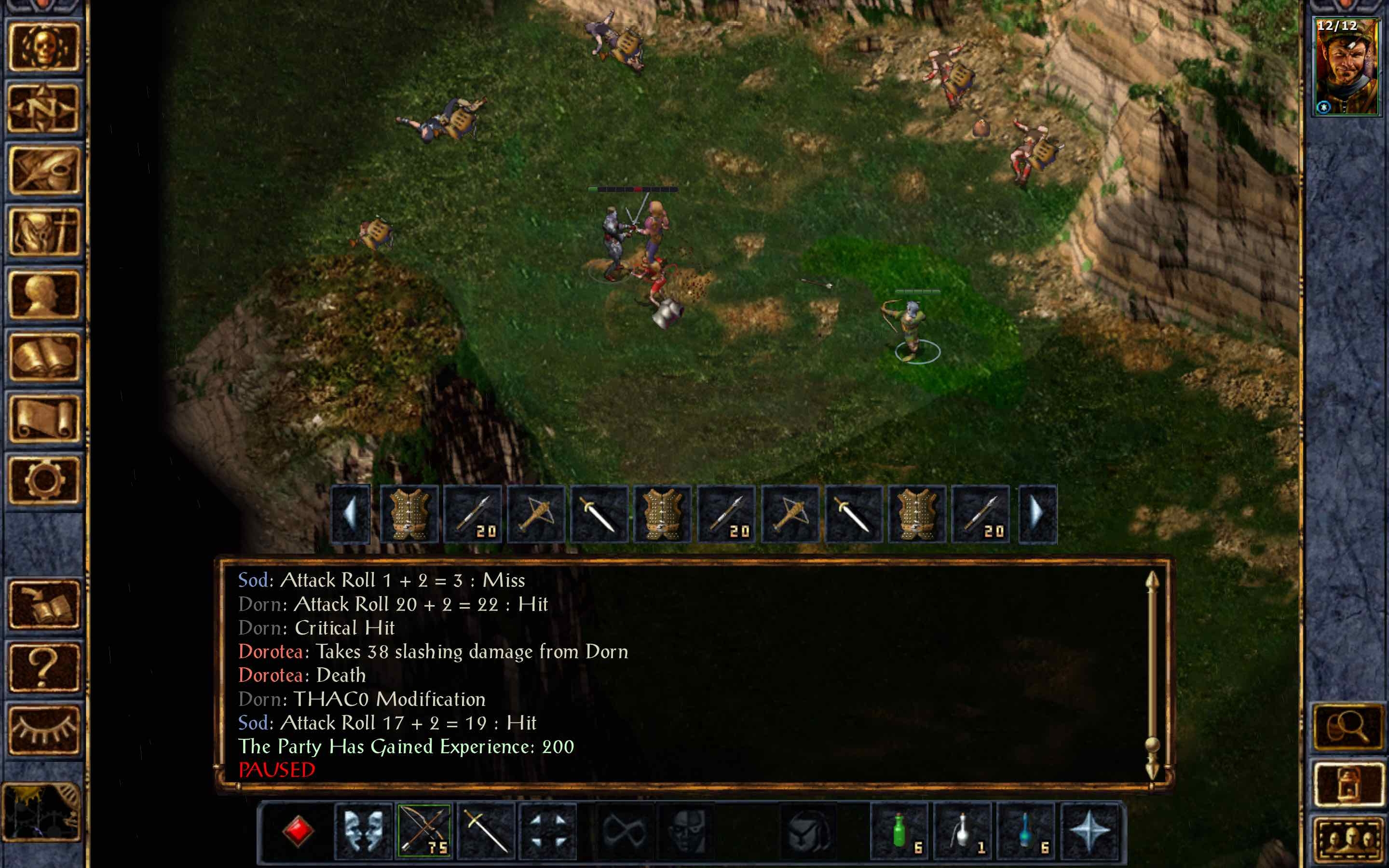 That was not a quick death, indeed. And it's a good thing his immortality item works now - he needed it, as he took two crits for 16 total damage.
Sod immediately follows up by shooting down Senjak, and Dorn can join. 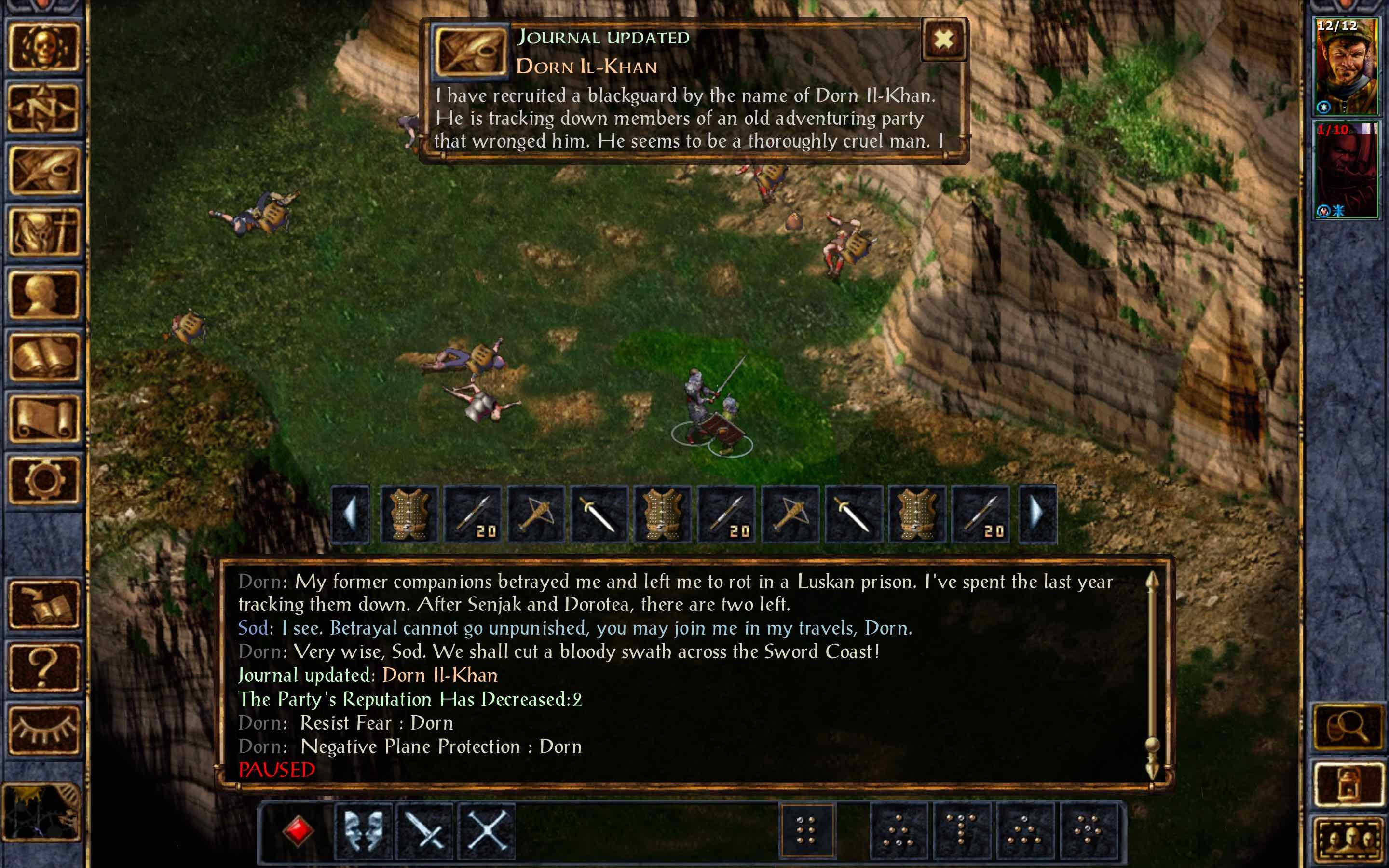 The pair continue to the mines, where in a secluded storage shed... 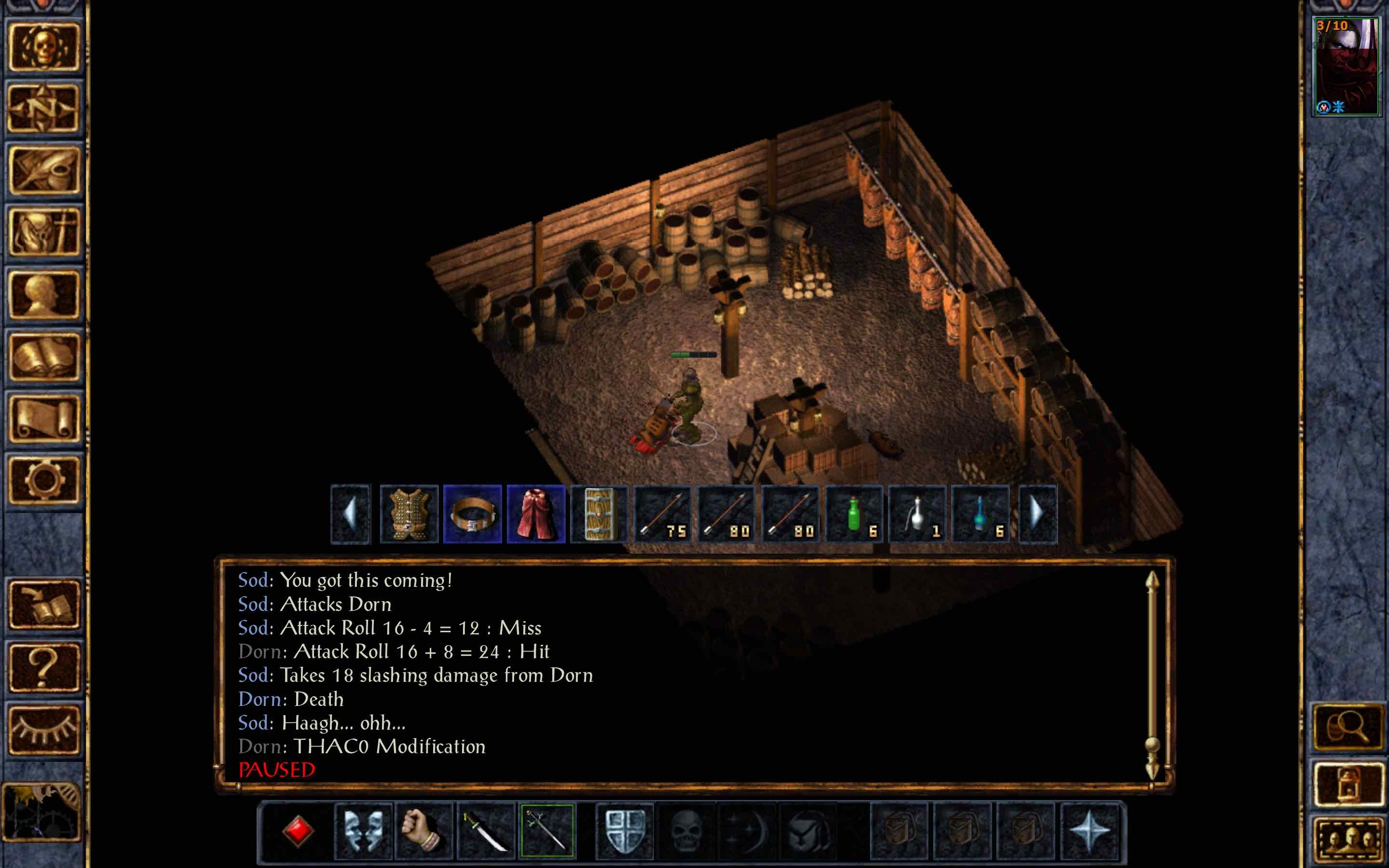 Sod takes a dirt nap. And Dorn's blackguard blade draws something interesting from his victim...

That's it for the first session. Dorn is now free to adventure as he sees fit.

A mechanical note: how to do the protagonist switch. To pull this off, pause the game and use the cheat command Control-K to remove the protagonist from the party. With the game still paused (if it's not paused, it's just Game Over), save and then load the save. Everyone else moves up a slot, and you can continue the game with the new protagonist. Killing the previous protagonist is entirely optional - but this is Dorn we're talking about.