Some considerations about the contradicting coordinates of the bridge district

_Connacht_ Member Posts: 146
September 2019 edited September 2019 in Baldur's Gate II: Enhanced Edition
Even if you go to the bridge district coming from the southern part of Athkatla (like the first time you go there), you always access to the area from the gate that we see on the north-eastern edge of the map: 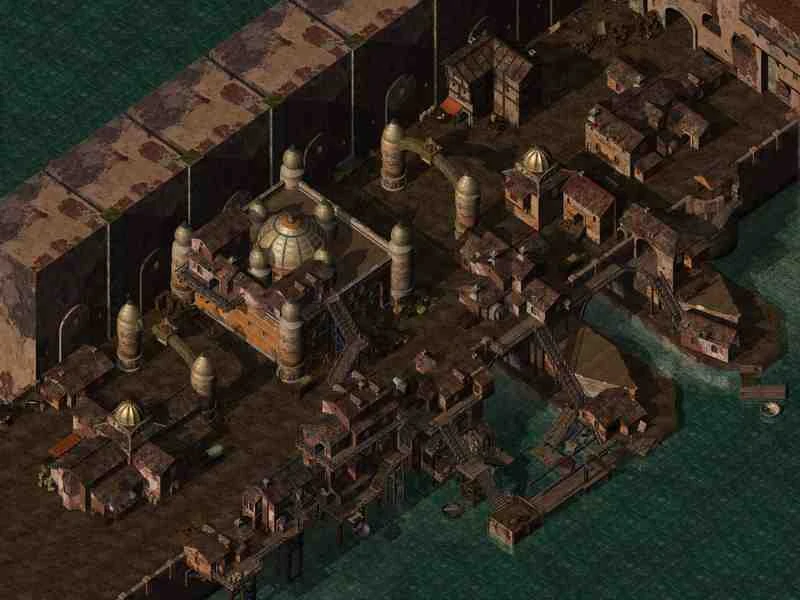 I always found this kind of immersion breaking and to solve my suspension of disbelief I always pretended that the map itself was rotated. That is, N was placed below and E was on the left of the area, thus you are looking from above as if you were placed north of the bridge, looking towards south. So the party is not really entering from the top of the map, but from below! (despite we still enter from there even when we come from the north side of the city...)
However, there shouldn't be any reason to force something like this unnecessary rotation of the airview, not only because you could have easily met lieutenant Aegisfield on the other side of the map. There are districts that put you on different access points when you travel, so I don't think it's a problem of coding either. The only exceptions beside the bridge district are the graveyard and the temple district, but they can be justified (at least the graveyard) because walking in the streets you might still end at the same place; but with the bridge that's clearly impossible.

Besides, looking at how the bridge is portrayed on the campaign map, unless we consider those icons unreliable (and I think they are just abstract depictions, the temple district seems to be rotated too), one could argue that the area is not rotated and the small dockyard of that district is effectively on the south-eastern side of the bridge: 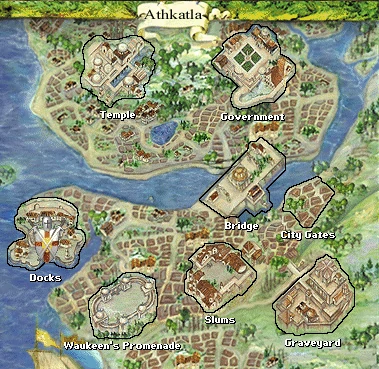 Which could be a bit silly, because boats can easily pass under those two archways we see in the area, but not ships like the one we take to travel to Brynnlaw. In fact, we rendez-vous with Saemon Havarian at the bridge district. The cutscene uses the same scenery of AR0500. We don't see the ship on screen that moment (we wouldn't anyway as it isn't actually painted), but we see it at Brynnlaw and it's definitely larger than those passages. The dockyard faces an inlet, while it should face the estuary and open sea (we are in the mouth of a river) to allow for any cargo ship to set sail towards Brynnlaw and Spellhold.

Bodhi says "this is your transport" while we meet Saemon, which can be interpreted as she was referring to the person-in-charge that would bring you to Brynnlaw. So what happens could be that you actually take some boat to pass under the archways and get on board of the real ship, waiting on the other side of the bridge (or even go to the proper docks), although this would be incredibly overcomplicated even with the excuse of secrecy... but Aran Linvail clearly says "this shall be your ship to the island". Even if Total War: Rome 2 teaches us that ships can row over the ground and through buildings with some effort and goodwill, I don't think that Saemon's ship can do that nor fly over the bridge.

My guess is that we shouldn't take the meeting to literally happen in the bridge, and the scene at the end of chapter 3 is really abstract. I think that the developers wanted to show Charname secretly set sail but they also didn't want to use the docks district because that scenery was too familiar to players. So even if the map used is in fact that of the bridge area, we pretend that the expedition sets sail from another place of Athkatla.
Or, more easily, area maps are effectively rotated (N is not on the top of the map and so on) and the icons on the grand map are only abstractions that shouldn't be taken literally.