Selerel Member Posts: 86
January 21 edited June 18 in Challenges and Playthroughs
Hello! First of all, I want to say I just discovered this forum and am very glad it's here. I've been reading a lot of the other entries and I thought I would share my current playthrough (A few playthroughs agao I started keeping day-to-day logs of my in-game adventurers and decisions...). I was definitely inspired by @Gurkengelee 's thread, too, and just so happened to be playing a CE character myself.

I haven't been taking screenshots but I will probably start taking more!

But here are the "parameters" of my playthroughs:

-PLAYTHROUGH of the entire BGEE saga from BG1/TotSC to SOD to BG2 to TOB. Core rules, unmodded.

-ROLEPLAY. I try to flesh out as realistic a character as possible and roleplay that. I'm a big fan of the Enneagram personality theory, it says there are 9 basic personality archetypes and describes their core motivations, basic fears and desires, etc. So I pick one of those and then combine with one of the 9 alignments, and then I come up with a Candlekeep-based biography to match the character. I generally think about it for a day or so before I start a new character! In practice, this determines dialogue options and the specific prioritization of quests and areas.

-MINIMAL RELOAD. I know that has different meanings to different people, but to me it means I reload when charname dies, but I roll with anything else that might happen. There are case-by-case exceptions, of course. I'm generally not a fan of having real-world distractions affect the in-game plot (e.g. a companion gets killed because someone knocked on my front door and I got distracted). Also if there is some weird, counterintuitive game mechanic I was not expecting, I may go back and replay more carefully now understanding the game's cause-effect logic (e.g., a quest completion causes my reputation to change, causing a companion to leave--maybe I reload and make sure I take the valuable items from that character first, but still go through with it; as long as it can be justified with in-game, in-character logic, my metagame whiff is forgiven). So sometimes a reload will lead to the same outcome as the original play ("hey, my companion still died even though no one in real life distracted me this time") and that's fine. But after all this time playing BG I do appreciate random unfortunate events that throw a wrench into my plans.

-MINIMAL METAGAMING. I go in without any preconceived plans for the game--just personality, colors, and plan for weapon proficiencies and/or thief skills depending on how I envisioned the character originally. As little metagaming as I can possibly control--I try to decide which quests to do, which companions I keep, and which areas to explore based on what makes sense for the character, at the time, in that moment. I choose the most in-character dialogue options, even if I'm aware it may lead to not getting a quest or losing out on a companion or whatever. Example: I have had dreams for months of getting a certain companion in my party, only to realize when I finally meet them that's there's no realistic way to get them to join with the dialogue options provided. And I have to suck it up and move on. So I really don't have any idea what my party will be when I start up.

I let all these things basically lead me into a random, roleplayed saga run. Each playthrough is different depending on the character, but I probably average 75-80% of the game's content each run.


Like I said, I'll be taking more pictures. But to catch you up with the character: 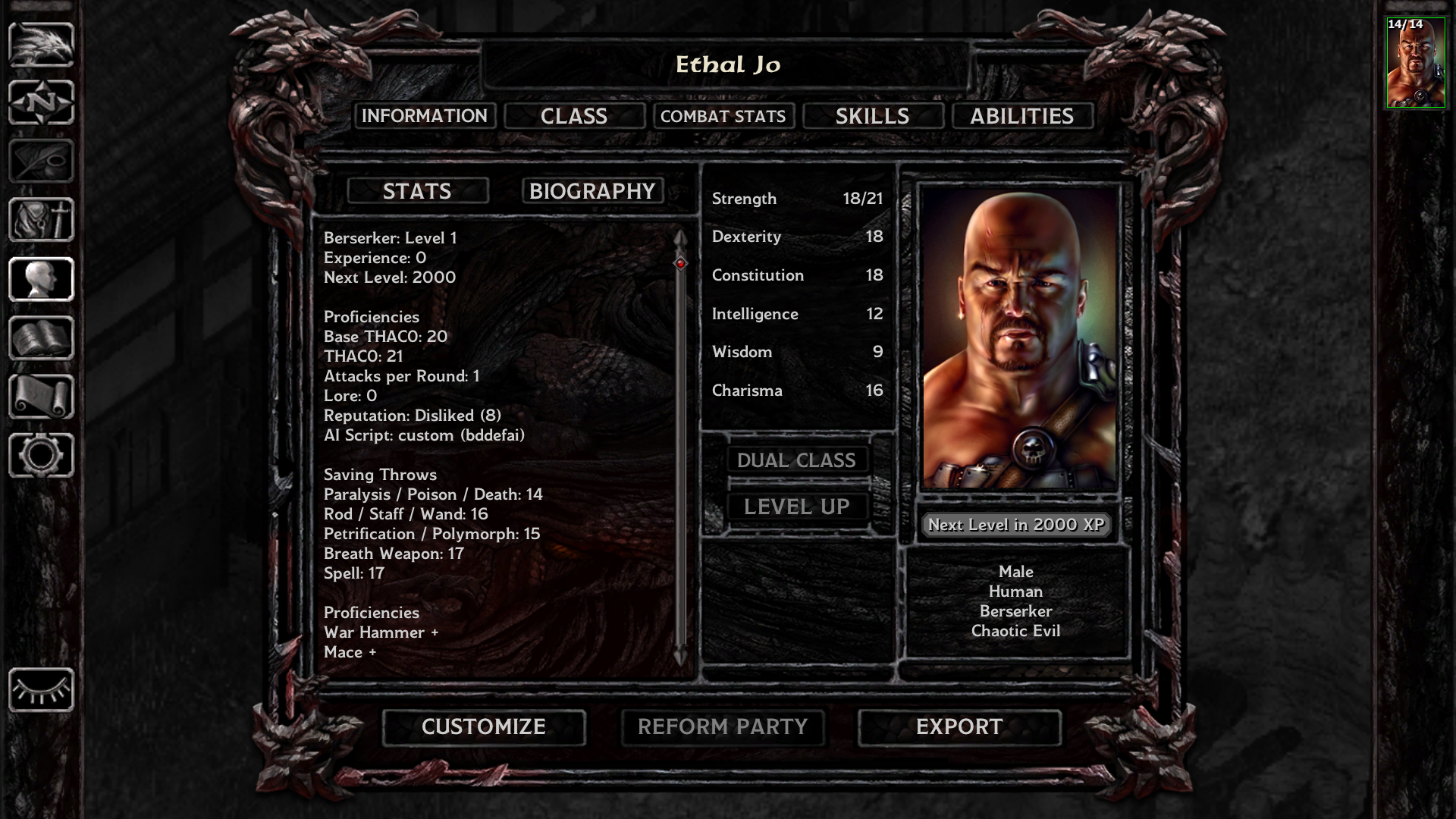 (This is long but it grew over time! This was written initially just as notes for myself, and not for others to read, so sorry if it's a bit stilted. I did some quick editing before I posted...)

You were a very tough sire for Gorion to raise. There was always some kind of cold, angry mean streak in you; you were a large child and tended to beat and violently dominate other children during play, with countless incidents over the years, hundreds of which seemingly already happened before you formed your earliest memories. In the formative years, you learned that you can get what you want by aggressively taking it. But even into your later childhood, adolescence, and young adulthood, as you became a large, strong warrior, callously roaming the Candlekeep grounds naturally looking to dominate others...the other well-educated monks, mages, and students would look on in derision and fear. You felt they hated you, and would steal from you and mock you and curse you when you turned your back...so in turn you would react angrily. You learned there would always be those that would try to hurt you and your best defense was simply to lash back out and try to hurt them first, sometimes gathering loyalists and sycophants to better your odds (Imoen was one of these). But clearly this all led to more fear and derision.

While your foster father has tried to impress the knowledge of a thousand realms into your head, it was always an annoying waste of time. To you, there is no real meaning behind society; the structural components are an illusion; it's just rats running around tending to a different heaps of trash...People will resort to their base instincts as soon as their survival is in question, and that may include preventing the survival of others. You know the truth, which is that anything can be taken from you and anyone can do it. There are those that know their subservient place in the natural order, and there are those that will fight and kill to be the strongest to accomplish their own goals.

You go into situations really, truly wanting some unachievable level of peace and quiet--a respite from the constant battle and struggle that follows you around...a way to calm your nerves, clear your mind, and even open your heart...you even think you can be jovial, you're known to bark coarse jokes and engage in semi-calm (never-enlightened) conversation, in good situations--you're one of those people who thinks he's really funny, but isn't. But without fail, some threat or some insult always seem to always intrude, and you can become aggressively intolerant. Of course, your rage may be quickly staid as you remember your philosophy on conflict and dominance, and you may simply embrace the "necessary" slaughter. Often, you can swing wildly between the two attitudes--cold psychopathy and obsessive anger, much depending on how close and dangerous the threat is, but also depending on your gut instincts in the moment. For longer-term threats, you can react with stress, slurrying all your thoughts and feelings around in your head until it is a white-hot ember at which pointed wrath is the only solution.

But generally you don't keep grudges exceptionally long, or remember them especially well, even though your rage during the moment can be overwhelming. Those that know you know you walk very lightly around you when they notice the hints of stress and paranoia ratcheting up, as brash displays of violence may pop up during even fairly light conflict or misunderstandings.

There are times, and when things are very calm, where your heart is able to open to certain companions who've proven sufficiently useful and loyal, thereby contributing to this "peace" you want. For these select few, you may fight to protect and defend, even though most life in general isn't super valuable to you--death, carnage, and murder are unfortunately necessary and the only way to defend against those very things. But connections CAN be made.

In general, no matter where you are, you walk along with nostrils flared, deep loud breaths, and eye slowly scanning left to right for threats. You want to think of yourself as confidently and energetically making your way through the world, backing down threats before they even raise their head. In reality, your overconfident, violent nature is clearly broadcasted, and it's as though you are WANTING to be riled up, and go out of the way to give yourself an opportunity to placate your inner rage (i.e. use violence) to get closer to this idea of peace.

Even though your alignment is chaotic evil, you do not really represent the sadistic aspect of that alignment. You are better described as a person of low moral character who is also violent and unhinged. But you do not get excessive pleasure from causing pain and destruction, other than the natural high of the triumph of vanquishing your enemies. It is to be said, you don't get that many negative emotions out of it either.

Moderate-to-low intelligence and wisdom, although relatively high charisma--while your general thought processes have a bit to be desired, there is some level of magnetism about you, and you are able to gather allegiences...and of course there are those in the world that WANT to be led by someone strong and dominant like you. While you have a moderate, almost dangerous amount of intelligence (enough to recognize patterns even when they aren't there), it is truly your mediocre wisdom that keeps your decision-making focused on accomplishing very short-term ends at the expense of most else.


So, I'm only about 5 weeks out of Candlekeep with this guy, and haven't done much yet of the main plot, so I'll post those adventures very shortly in reply!