Sure, he's a mass murdering psychopath with daddy issues. There's still a certain something about Sarevok though, from his demonic armor to his intense hatred of foster fathers that don't have a gut full of stab wounds, that would not be amiss in a Norwegian black metal band. While possibly one of the most potent children of Bhaal, ultimately Sarevok was not strong enough, unable to bring his dream of rampant nut-punches on anyone who looked at him sideways for all eternity to fruition.

But what about Gorion's ward? What if he was equally -- nay MORE -- fearsome than Sarevok?

That was the basic concept behind this character: a balls-out blood rage filled badass that makes hard boiled warriors turn into whimpering nerds caught on a panty raid that are terrified of having their skulls cuckolded into a couple of neat flat chunks of organic matter. His name literally means 'the mercy of Bhaal', which is a cosmic joke on everyone stupid enough to cross this awesome mythological figure of manliness because the Lord of Murder has no other mercy than punching you until your internal organs liquefy and your ribs snap like a rack of popsicle sticks.

So without any further ado, I introduce to you:

Hannibal the Son of Murder 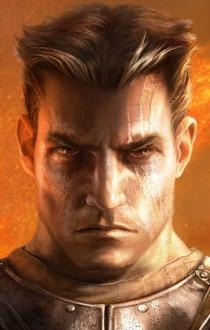 Race: Demi-God (But he looks human, because let's face it, that's the scariest creature in Toril)
Class: Berserker (The guy flips out into messed up furies and obliterates ballsacks like it's his job...)
Alignment: Chaotic Evil (...and he doesn't care who gets in his way)
Ability Scores:
STR: 20
DEX: 18
CON: 20
INT: 14
WIS: 12
CHA: 16

I don't think much needs to be said about how epic his scores are. I realize his Strength and Constitution are technically 'illegal', but (aside from the fact that if you do everything right, you'll end the saga with a natural 25 Strength as befitting the Son of Murder) don't feel bad because of the following list of reasons:

His weapon proficiency starts out with:
Halberd: **
Two-Handed Weapon Style: **

Your destiny is to wield the Ravager +6, a weapon that is not only the most limb-severing over the top terrifying weapon in the entire game, BUT IS NAMED FOR THE AVATAR FORM OF YOUR DEAD FATHER. You will also have enough pips by the end to grandmaster one other weapon, but really, you don't need any other. A halberd does piercing AND slashing damage, making it inherently superior over the two handed sword, and you get points for style because everyone and their hamster uses two handed swords.

And because I'm such a great guy, I'm not only throwing in the portrait and the character, but a whole new sound set for his voice that will give you tingly feelings in all the right murder places. This is a guy even Dorn would say: "Holy damn, this is the man I need to be following around."

Just download, unzip, throw the .bio and .chr into your 'characters' folder in Baldur's Gate: Enhanced Edition, then toss the Custom3 sounds (the files themselves, not the folder) into the lang/en_US/sounds folder. Pop that handsome mug into your portraits folder, and you're all ready to go: just start a new game, import Hannibal, and let the carnage begin.