Elrandir Member Posts: 1,653
February 2014 edited August 2014 in Challenges and Playthroughs
Here I am again, writing yet another question thread for yet another different character... (I swear I'm not ignoring my previous playthroughs. I'm just playing them at the same time as this one...)

Anyway, this time around, I'm playing through as a solo archer. She's been the most fun solo class I've tried so far, and I've been making decent progress with her. I mainly started this thread so if anyone's interested they can get updates on how the playthrough is going, but I also started it in case I had questions I needed to ask. But I'll get to that later. First off, my character: 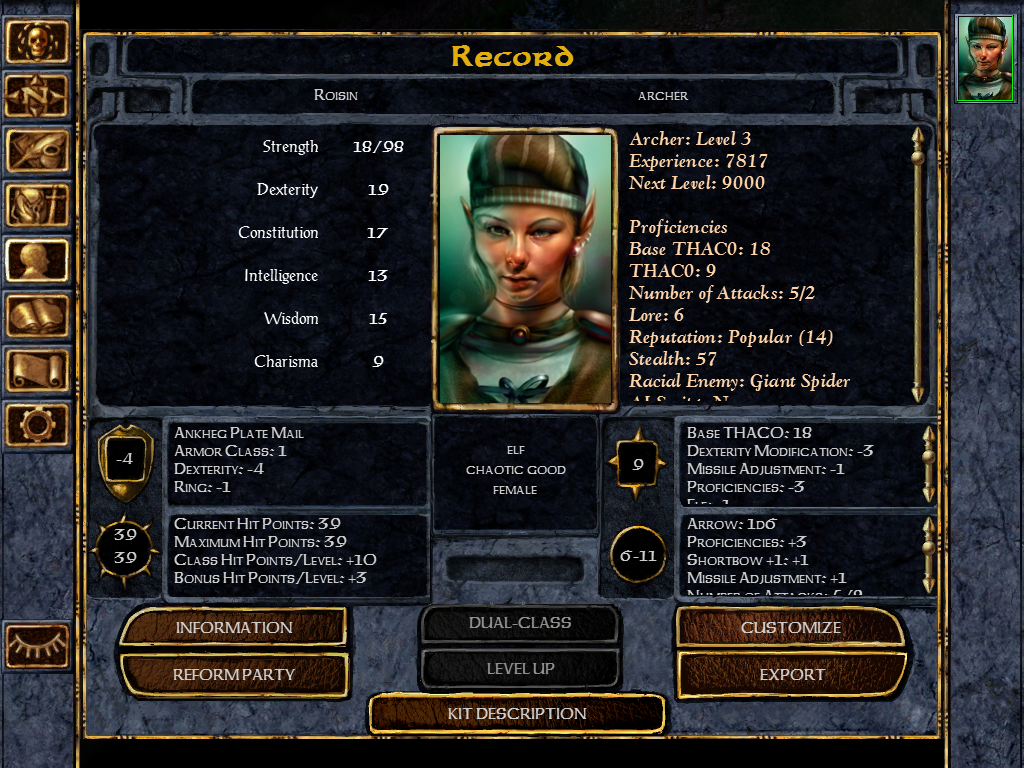 Roisin (pronounced Ro-sheen. It's Irish) is true to her name. A little rose. But every rose has thorns, and that's evident in her personality. She's curt, snippy, and sometimes plain rude. (As intentionally evidenced in her abilities) This is part of why she desires no assistance from others. Fortunately, to make up for this, she's also talented. Growing up, she studied well and was diligent, albeit a bit aggravated by all the books. She longed to travel the world, see the great forests, and commune with nature. She took basic training from the local guards, at the rather strange suggestion of Gorion. He had never before seemed interested in martial prowess, but Roisin merely assumed he wanted her to be well rounded. Roisin proved excellent with all manner of ranged weaponry, though she found shortbows to be her favorite tool, as their smaller size was easier for her to handle. That is not to say, however, that she was weak. Nay, despite her size, she was a mighty force to be reckoned with, and on numerous occasions bowled her sparring partners over. But she never truly excelled in melee combat. There was just something in their style that she could not quite grasp. One day, while picking a blade out the equipment chest before training, she found an old rusted katana. Even decayed and damaged as it was, it called out to her, and she plucked it from the chest and continued to use it from then on in training. At least, that is, till it inevitably shattered. She was discouraged, but the guards, feeling pity for her, purchased the closest thing they could find. (and reasonably afford) A ninja-to. It wasn't quite the same, but Roisin still enjoyed the sleek and slender design of the blade. Over time, she trained with all manner of foreign weapons, finding them more suited to her, but she still longed for another katana. As for her relations with those in town, she was quietly fond of them all, save one... Winthrop's foster child, Imoen, drove Roisin insane, and she often avoided Imoen whenever possible. It was unfortunate, as Winthrop himself was a pleasant enough chap who got along well with Roisin. But the person Roisin was most fond of was her dear foster father, Gorion. Although she hated his rules and restrictions, she truly loved him like a father.

Now then, that's about enough backstory. I'll list my progress and current questions in a comment a little later. (when I have more time) That's all for now folks!

Edit: For those of you who are just finding this thread, be forewarned that the quality improves after the first few installments. (or degrades, depending on what you're looking for.) The first few I tried doing a very "just the facts" style with some roleplaying thrown in, but I experimented with my writing a bit over the course of it, and it became much more of a roleplay\story than a challenge run-through. That said, I still hope you'll read it, and I hope you enjoy!
Post edited by Elrandir on August 2014