The (no-reload) exploits of Amend of Candlekeep, Bounty and Treasure Hunter, and Company

Aurorus Member Posts: 201
April 2014 in Challenges and Playthroughs
Having completed BGI with my good archer on SCS, I want to have 2 other charnames ready for SoA. I have not played much of SoA for many years and want to run through 1 time on vanilla to refresh my metagame memory before starting my archer through on SCS. I also want to play each alignment and each type of class (rogue, fighter, divine caster, arcane caster). I have a good fighter (archer) ready to go, but alas my bard has died, my druid has died (3 times now), and my sorceror has died. My thief, however, has performed admirably through the early and mid portions of BGI, and so this journal will detail his exploits through the Sword Coast.

Meet the protagonist, Amend of Candlekeep, ward and foster-child of the sage Gorion as he appears now (just took the screenshot), in the city of Baldur´s Gate. 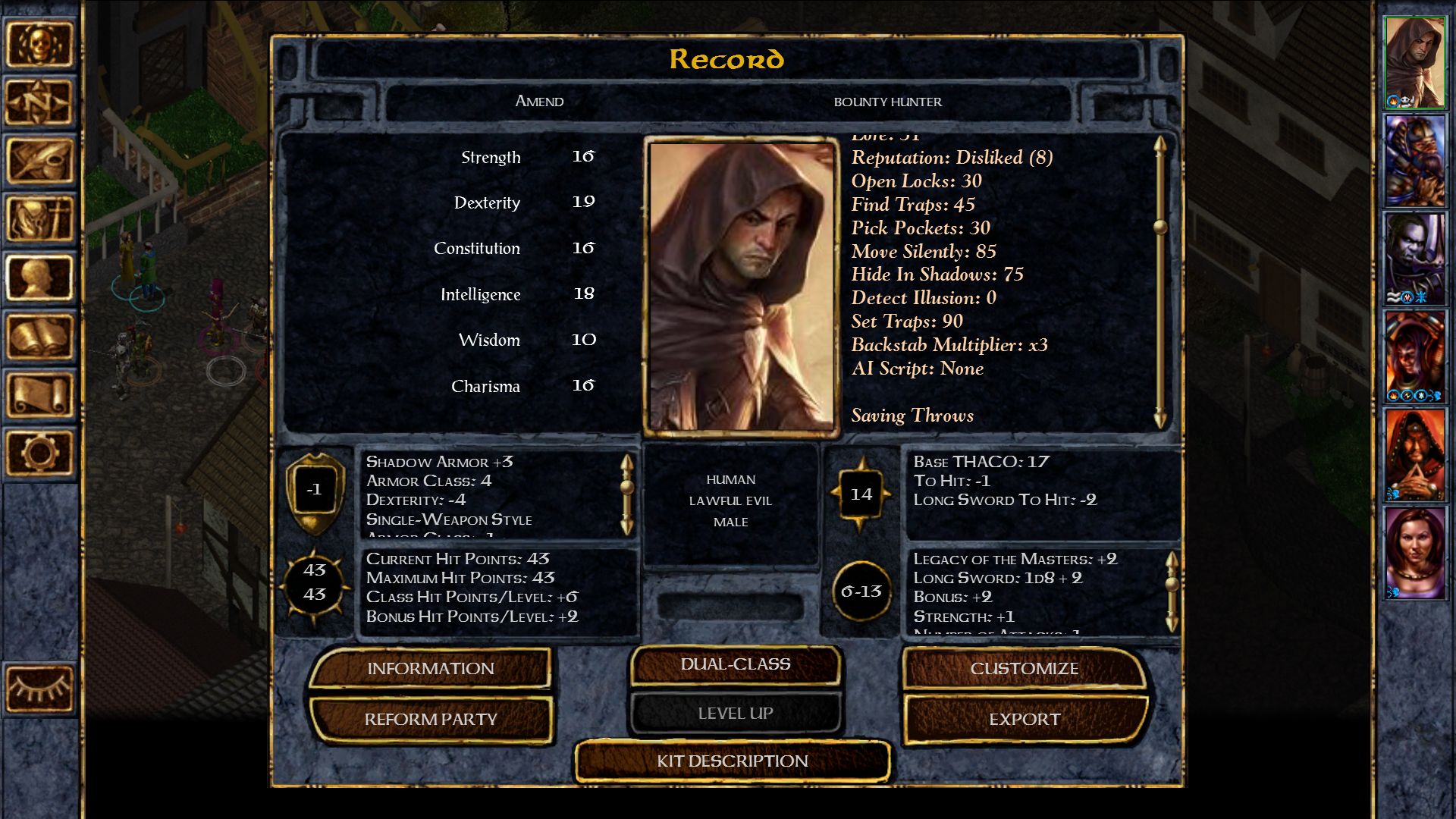 Amend was raised in shelter and seclusion in Candlekeep under the tutelage of Gorion, a sage and spellcaster of some merit. From Gorion, Amend learned the importance of honoring one´s word and responsibility. A man´s word is his bond and fidelity to promises is the measure of any man.

Amend also learned something else, that Gorion never mentioned; everyone who visited Candlekeep was rich. Scholars, foppish dandies, petty nobles, powerful wizards, they all had one thing in common: money. The guards, many of whom were Aurorus´ friends, such as Hall, were poor. They drank too much, gambled, and engaged in other sorts of silly behavior to escape the reality that they were nothing more than servants and bodyguards, whose lives were forfeit if necessary, to protect their betters: everyone with money. If his word was the measure of a man, money was the measure of all other things. Everything could be had with money: women, power, pleasure, freedom from want, security, comfort. It was the fruit of labors and struggles: the measure of a man´s success against the adversities world.

He learned these lessons rather late, however, having frittered away most of his youth on frivolous activities: drinking and gambling with Hull, sneaking around the keep and pilfering little things for fun with his childhood friend Imoen, and so forth. The only real skills he possessed were a passable ability with a bow and a sword that he learned from Hull and the skills he developed with Imoen. He was possessed of an innate intelligence, however, and had a keen mind for mechanical things, dabbling with the creation of small traps and the like, capturing and killing squirrels and rats inside the keep.

So when Gorion told him that they would have to leave Candlekeep immediately because of a growing danger there and 2 assassins tried to kill him, Aurorus understood immediately what was at stake: his life. This would be a battle for his life, and it was time to put away childhood things, become a man, and use what little skills he had to survive and prosper in a harsh world.
Amend000.jpg 351.7K