[All] Creatures should use alternative attack sounds (CRE Soundset)

skellytz Member Posts: 6
March 2016 edited March 2016 in BG:EE Bugs (v1.3)
This stems from an extensive research I've done on soundsets. If you would like to read the full report, go to: http://www.shsforums.net/topic/58583-issues-with-bg1-monster-animation-attack-sounds-bg2-bgt/

This report applies to BGEE and BG2EE.

Please take a look at the attached picture. This is a representation of a soundset stored within a creature file (*.CRE). This particular example is a regular BG1 wolf: "WOLF.CRE." 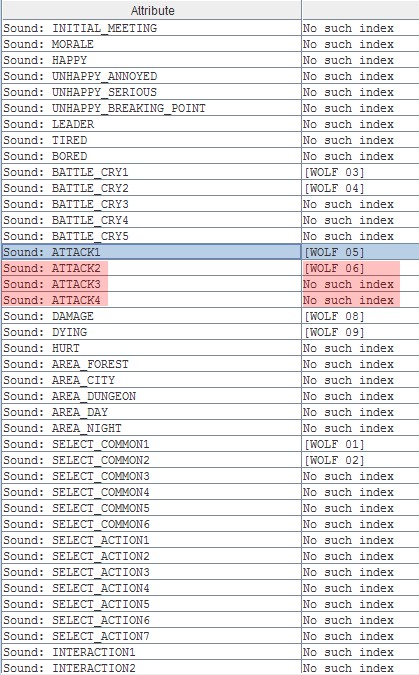 Note that the soundset stored inside a creature file allows for four alternative attack sounds: "ATTACK1," "ATTACK2," "ATTACK3" and "ATTACK4" as showed in the picture.

Unfortunately, the game executable takes into account only the first attack sound slot, "ATTACK1." The three remaining slots, "ATTACK2," "ATTACK3," and "ATTACK4" are completely ignored and are never enabled for sound effect playback.

This means that players never get to hear additional audio files prepared for alternative monster attack sounds. In the case of "WOLF.CRE," only "WOLFF05.WAV" is played back upon each attack, while "WOLFF06.WAV" remains ignored by the game executable, despite being present in the soundset.

Proof
1. Start a new game with the Abdel pregenerated character.
2. Summon a "WOLF.CRE" using CLUAConsole:CreateCreature("wolf").
3. Let the wolf attack you.

Observed
With each attack, the sound effect "WOLFF05.WAV" will be played back with minor pitch variance. This is attack sound slot one ("ATTACK1").

"WOLFF06.WAV" ("ATTACK2") will never be selected for attack sounds playback pool. It is ignored by the game executable.

Expected
With each attack, both attack sound slots should have an equal chance to be played back, not just the first slot. Players should hear "WOLFF05.WAV" or "WOLFF06.WAV" whenever the wolf makes an attack.

Notes
Occasionally (33% chance), a different attack sound effect can be heard overlapping "WOLFF05.WAV": this attack sound is "DWOLF05.WAV" drawn from the respective animation soundset, "MWLF.2DA." It belongs to the Dire Wolf.

This is another issue which I described here: https://forums.beamdog.com/discussion/48865/all-creature-attack-sounds-from-2da-files-should-not-overlap-attack-sounds-stored-in-cre-files
CRE.jpg 84K
Post edited by skellytz on March 2016