Ark_Tolei Member Posts: 69
March 2016 in Challenges and Playthroughs
Hey folks, I'm doing a livestream of BG:EE on Legacy of Bhaal difficulty. I'll be making an effort to do every quest, clear every area, and complete all the games content. I don't play BG as much as many of the people here, so I'm sure I'll miss a couple of the more obscure quests along the way, but an attempt will be made.

Rigid: All major content complete; Full party at all times (once available); No item use without identification; No custom npc's; SoD content will be full blind. I will be actively avoiding these forums once the expansion hits, since it'll be a few days before I finish up the non-expansion content.

Waffley: No summons; Limited resting (1 Rest per town visit, 1 rest to remove travel fatigue (not haste), 1 rest if backed into a corner where the only other option is to cheat on other restrictions); No unnecessary backtracking; All areas completed on first entry; No rest until fully healed; Coherent RP decisions (This might occasionally have unfortunate consequences)

The whole run will be done roleplaying as Aldrea. A quick note on alignment: Aldrea has changed quite a bit over the years, and despite her alignment displaying as Neutral Evil, she's really more of a Lawful Neutral character. When you see the ludicrous stats I rolled for her you'll see why I'm not rerolling her completely. 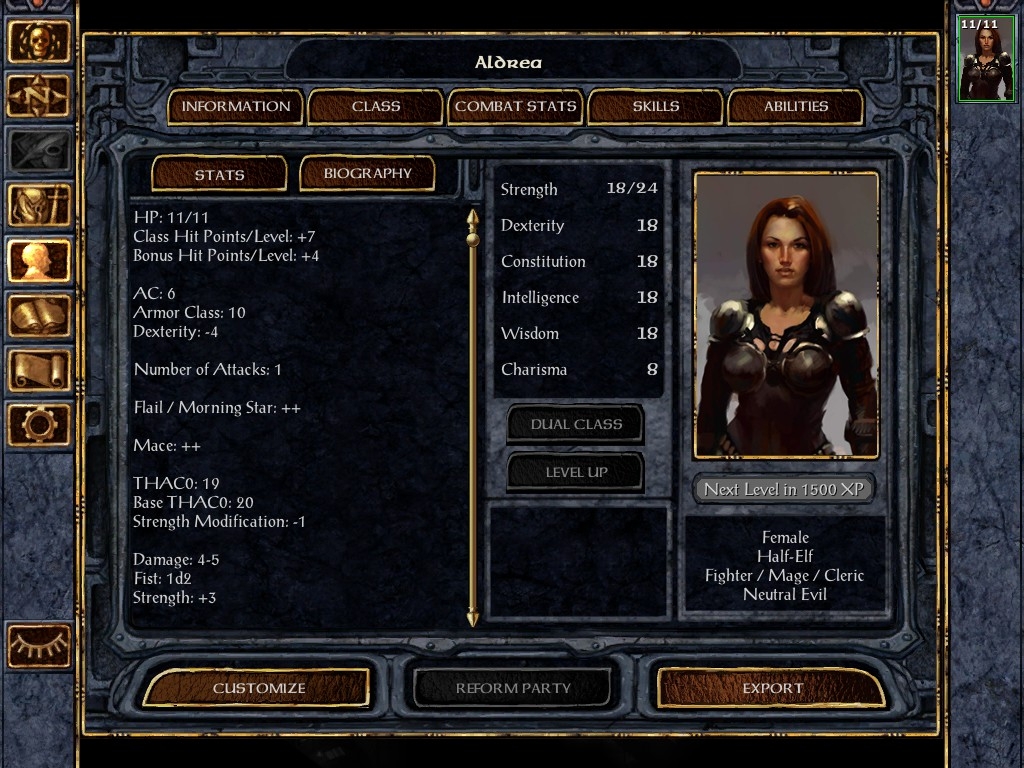 As a child, Aldrea was fascinated by the multitudes of powerful and interesting people that
frequented Candlekeep. Great scholars, wizards, and clerics all frequented the cloistered halls,
often bringing with them entourages of soldiers and guards.

It was in this environment, that a young girl with thousands of questions could truly thrive.
She learned to read at a young age, and devoured all manner of books with abandon. History,
theology, arcana, military strategy; her childhood was filled with every subject imaginable. She
found the stories of Mystra, The Red Knight, and other mortals who had ascended to godhood
particularly interesting. Some of her tutors discouraged reading such material, as the stories
tended to include very dark subject matter for a young girl, but her foster father Gorion was
always supportive of her curiosity, and let her read whatever she desired.

Aldrea disliked spending her days indoors however, and often felt stifled when she was forced to
remain inside. She had a host of reading spots up in trees, on the ramparts, and anywhere else
her climbing instincts could get her. When not reading she would engage in sports with the few
children that came to the keep. She was fiercely competitive, not with the other children, but
with herself. She always pushed to improve herself, even after outpacing her peers.

It should come as no surprise, then, to learn that she began training with the guards as soon as
she could hold a practice sword. Despite the enthusiasm of her peers, Aldrea found herself
uninterested in blades. Observing the watchers she had noticed that a blade was nearly useless
against a heavily armored foe, and she thought it silly to invest time and energy mastering a
weapon that was only useful for killing unarmored foes, when a mace or flail to the head would
kill you just as effectively nomatter what armor you wore. Her dedication payed off, and by the
time she had reached maturity she could stand toe to toe with some of the watchers themselves.

Aldrea was relentless in her desire to learn, however, and she didn't allow her martial training
to prevent her from continuing her studies into the arcane. In the evenings she would study,
either by herself or with Gorion, and with her quick mind she found herself casting her first
spells at the age of 16. Gorion's pride was palpable when she showed him her first cantrip,
changing her dull red hair to a brilliant silver for a moment.

Despite her interest and study of theology, Aldrea was always particularly unpious. She believed
gods were creatures like any other, and that mortals should strive to surpass the gods, not lick
their boots. She expressed such thoughts in a somewhat more delicate manner, but while the
priests of Oghma who resided in Candlekeep respected her thirst for knowledge, they were not
overly fond of her.

Things have begun to change for Aldrea in the past year, however. It started when she began to
find herself feeling stirrings of magic far different than the controlled arcane power that she
was familiar with. It was as if a well of power within her had been unlocked. She sometimes
found herself to be unnaturally focused, either in combat or her studies, which she ascribed
merely to her increasing competence. But then she found that she could channel that focus to
heal minor scratches and bruises, and with testing, noted she could heal others as well.

Knowing that such magic should be limited to those in touch with the divine, she started
questioning the local priests, who showed great concern at her newfound abilities. With further
testing and practice, she found that she could duplicate any of the minor orisons that a
fledgeling priest might, and over the course of the year developed this ability into full blown
spells.

Such abilities were not unheard of, though extremely rare, and some of the priests assumed that
she was simply recieving the blessings of Oghma, due to her lifelong dedication to learning, but
others feared her new powers. Some hid it well, but others, some of whom had always disliked
her, behaved as if her new magic were proof of some sort of illness.

Aldrea could tell that her abilities were a source of stress for Gorion, and he urged her not to
show how far they had developed to others. She followed his advice, but despite this, gossip
continued, and Gorion slowly became more and more stressed over the course of the year,
culminating in his summons today.

I make an attempt on every run to make decisions that fit the character in question. In a case where the tone of a reply doesn't match a character's personality, but that the actual content of the message conveyed does (i.e. a timid response saying yes vs. a stern response saying no) I'll play it by ear, and end up talking through what she's "actually" saying. This largely becomes relevant when none of the responses fit the character in question.

With all that said, here's a link to the livestream. Hope you all enjoy it!