loganultima Member Posts: 109
April 2016 edited April 2016 in Baldur's Gate: Siege of Dragonspear
Is it wrong to criticize a game for featuring one line of politically correct text in 50 hours of content?

The games before 2007 have had little to no 'politically correct' influence. Games used to be all about the story and the gameplay and about having fun.

This is one reason why old games are still better than "modern" ones.

The development of Siege of Dragonspear jumped on the bandwagon of the social justice warriors (they wanted to please this part of the community with a minor "easter egg" ) and got tanked by user reviews. For a good reason. Why ruin a great game with crap that you know breaks immersion and pisses off gamers? I've been browsing the forums on this issue and before you flood the post with "intolerant bigot" I want to attach this picture of a guy's reply to such a reaction. 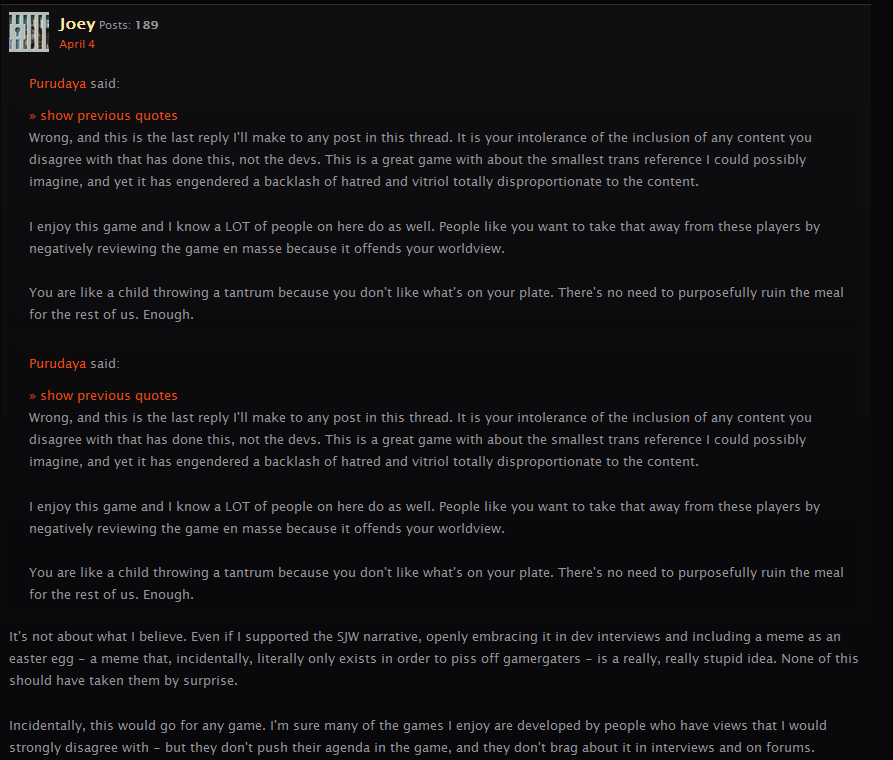 Yes, it is a single line in 50 hour of game content. Surprised that the community reacts in such a way? You shouldn't be, over the past 8 years this swj infection has ruined so many games that being allergic to it is a natural social reaction.

A lot of people are saying that the game is attacked by a vocal minority of swj haters and lgbt haters. We have to understand the fact that we (who criticize) are accused by the deeds that the accusers themselves commit. SWJ and LGBT were/are a vocal minority of haters who frequently throw child-like tantrums if games don't contain gay romance or "diversity" and attempt to nit-pick any "sexist" addition. Just look at Pillars of Eternity scandal with the tombstone tranny joke.

Now this vocal minority is getting a dose of its own medicine. I haven't played SoD yet I am still re-playing Enhanced Edition, this post isn't about the game itself but rather the industry and where it's heading.

Why break the immersion with this easter egg? this guy gets has the same idea:

I hope this'll be a lesson to other devs too. Piss a community long enough with injections of political correctness and they will eventually become reactionary.