Tisamon Member Posts: 209
February 2017 edited February 2017 in Challenges and Playthroughs
This short write-up is a by-product of my current LoB Tactics SoA solo run. Of course, I – like many other players – was aware of the mechanics described below for years, just never sat down to formulate them in a written form. Since I know sometimes writing down things = seeing them from a different angle, I thought sharing my thoughts might be a wise move.

First things first, let's get our terminology straight. Armor tier in this context refers to the best type of armor a certain class can equip. For example, Barbarian's armor tier is splint mail, while Shapeshifter's armor tier is nil. That's the theory, at least. Now, practically speaking, that's not what happens in SoA, and this is the reason why I am speaking of de facto armor tiers.

Once again, let's take a look at a Barbarian. In BGEE, our barb can don Drizzt's Mithral Chain, which is a great armor -- one of the best in the game, and also obtainable very early. This fact makes a Barbarian's de facto armor tier in BGEE higher than intended by the rules. In SoA, on the other hand, a barb really gets the shaft. The best armor for him, in theory, would be Armor of Faith +3. Unfortunately, Armor of Faith is only available to a priest protagonist, while a Barbarian has to rely on a Chain Mail +3 imported from BGEE, to settle for something like Aeger's Hide, or to go through the pain of getting the Shadow Dragon Scale -– which is very good, sure enough, but it's studded leather, for chrissakes! In other words, a lack of good chain/splint armors available early in SoA makes a barb's de facto armor tier lower than intended by the rules.

All in all, there are two essential criteria affecting a de facto armor tier: the armor in question should be (1) available in-game; (2) obtainable reasonably early. By the second criterion I refer to Chapter II and Watcher's Keep Exterior/Level I at most. Being able to obtain something in the Spellhold is, by and large, impractical -– it basically means you have completed about half the game without it. Thus, it is possible to divide all classes into three de facto armor tiers in SoA: nil, Shadow Dragon Scale (AC 1), and Red Dragon Scale (AC -1). Please refer to the table below for details. 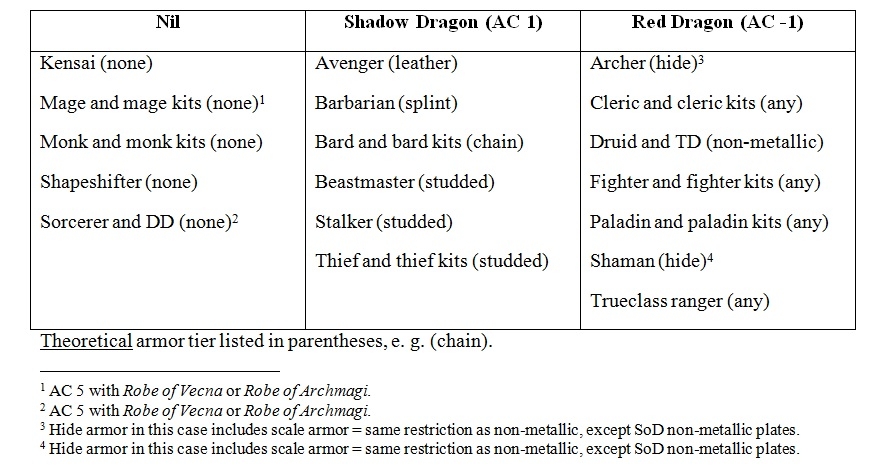