Abel Member Posts: 782
April 2017 in Planescape: Torment: Enhanced Edition
I was curious about what would be the optimal statistics points spread to succeed with most checks. So, I used this wonderful tool that is WeiDU to scan all dialog files. I extracted the relevant data and filtered it with Excel.

Methodology:
I extracted response triggers from dialogs.
Then I kept all checks that check greater values (CheckStatGT). Lower values checks are often used for intervals which is why I deemed them non-relevant.
Some checks check two statistics. I didn't find a way to account for them properly so I had to exclude them from the analysis. They weren't numerous (19) and didn't require high scores so I think the data is still relevant.
I also removed duplicates. Weirdly, there are a great number of them and I don't see what they do besides occupying more space.
All numbers you see in charts and tables are greater than requirements, so add 1 to get the score needed.

First, a chart that shows the proportion of checks for each statistics. 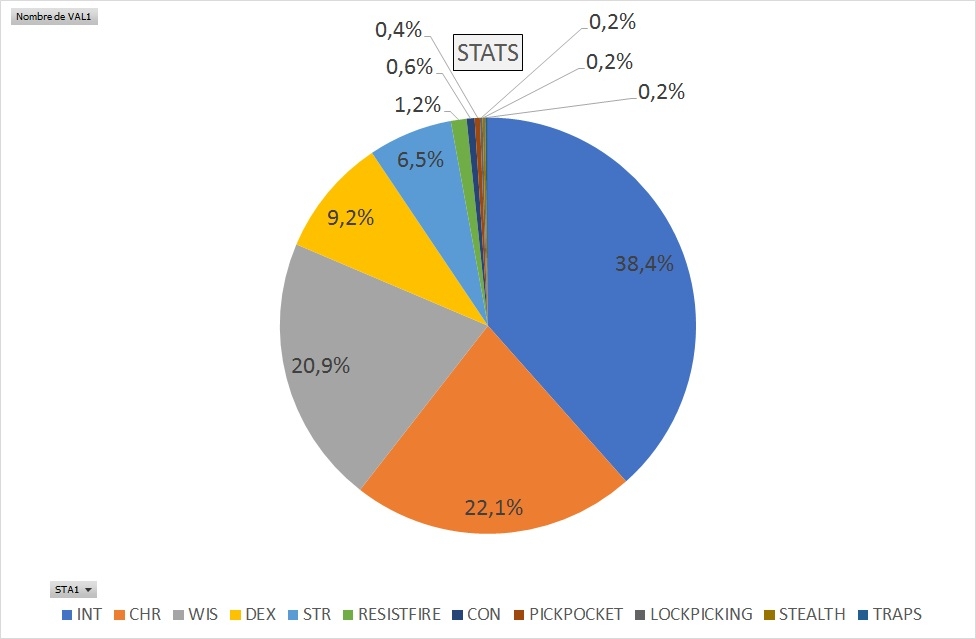 Unsurprisingly, intellectual statistics are the most important ones when it comes to dialog checks. Less expected though, Intelligence account for almost 40% of the total (188/489)!
Then come Charisma and Wisdom, almost equal in importance, but about 2 times less than Intelligence (~20%)!

Let's say there isn't much left for physical statistics! Only 80 checks out of 489, which is about 15%.
Stength goes first in importance, followed closely by Dexterity. Constitution comes last with only 3 checks which makes Constitution the worst attribute in the game from that perspective!

Oddly, even Resist Fire, which I guess no one expected has more checks (6)!
There are also several but very few Thieving Skills checks.

So, as far as dialog checks are concerned, the order of importance is:
1) Intelligence
2) Charisma & Wisdom
3) Strength & Dexterity
4) Everything else (which I won't cover further unless you insist)

Given that we can really increase two or three statistics at character creation, it's also important to know the values of checks.

Here is the proportion of Intelligence checks by score: 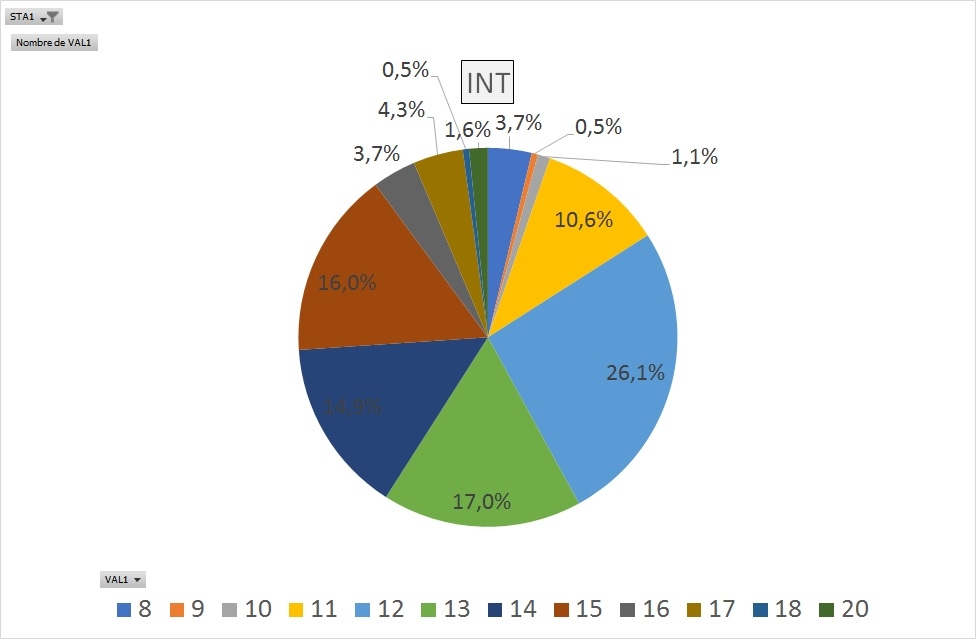 The checks that need higher Intelligence are those: RES is the dialog resource. If you remove the initial 'D' you get a creature resource/name that should tell you when to expect the check.

Now, on to Charisma: 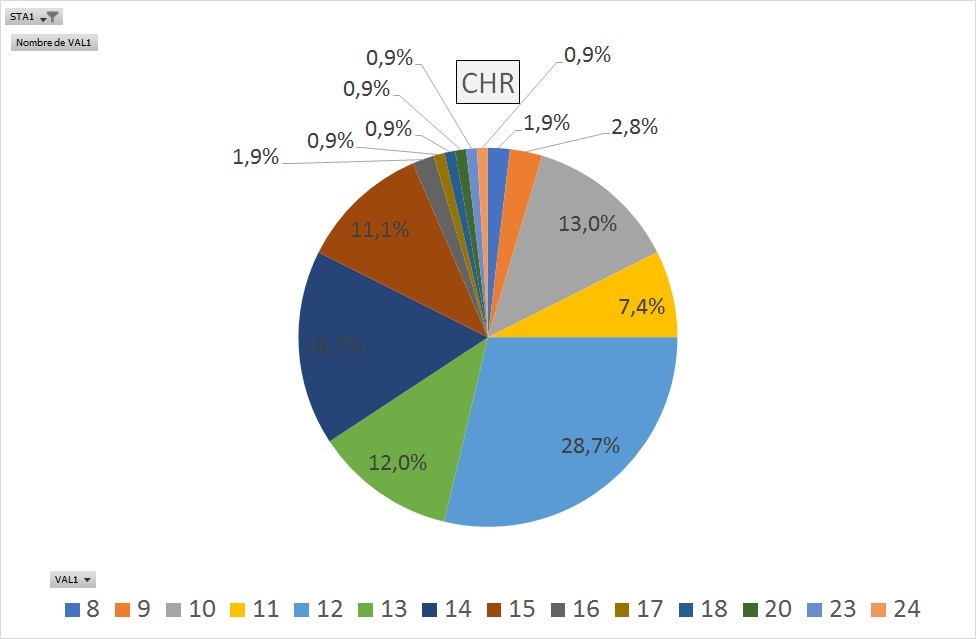 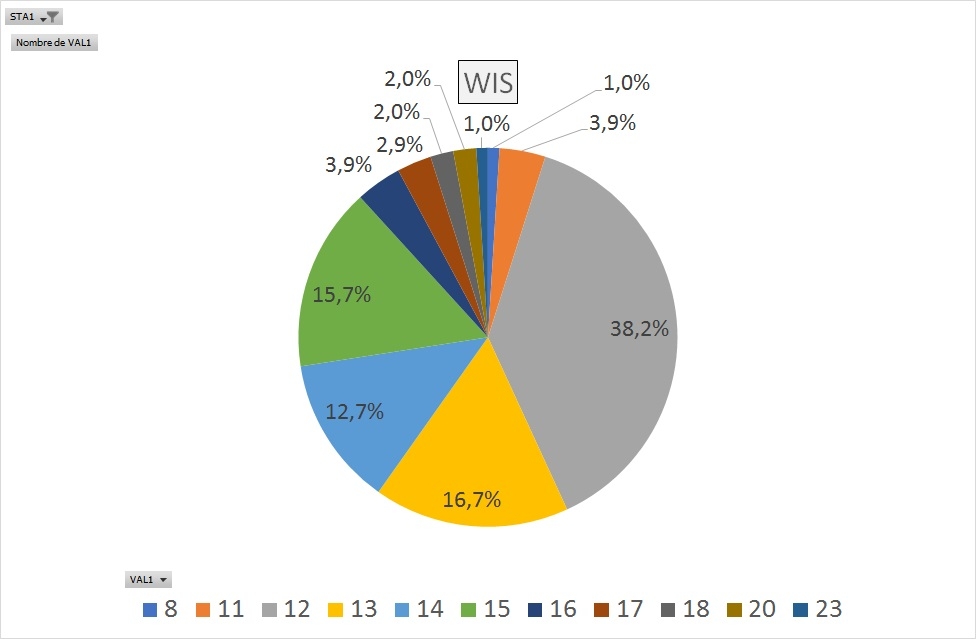 Again, same conclusion! A Wisdom of 16 gets you 90 checks out of 102 (~90%). The developers made a nice job harmonizing the statistics requirements! 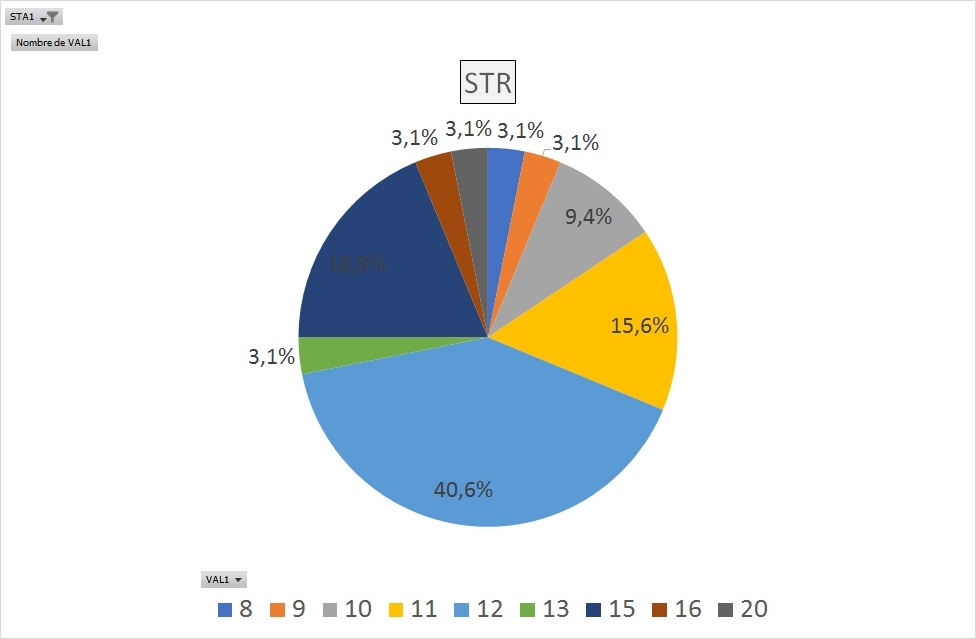 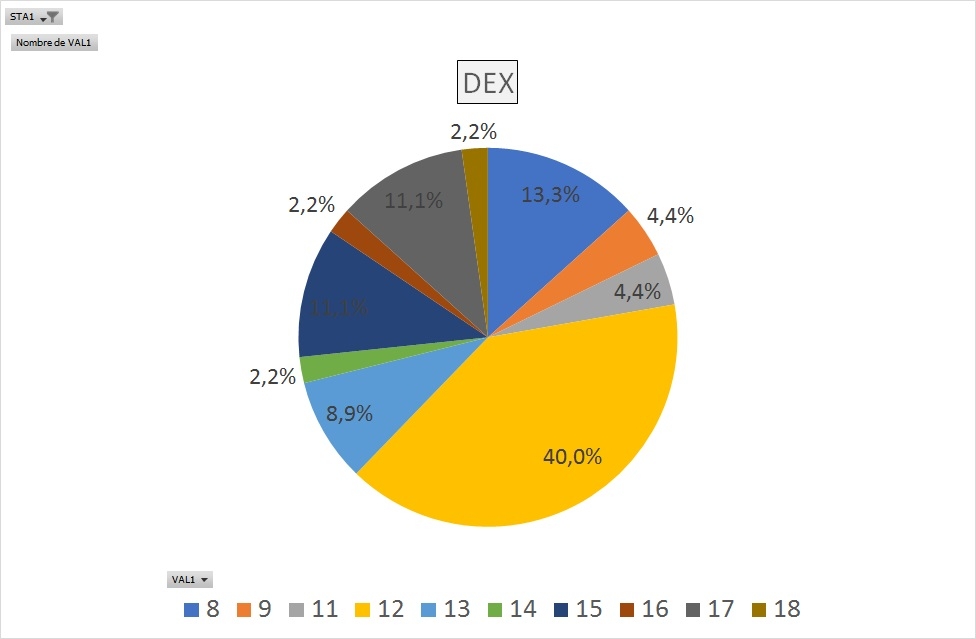 You can use this table to decide: So, what is my recommandation for starting statistics scores?
First, I would max out Wisdom to 18 (+9) mainly for the XP bonus. Increase it to 19 with my first point on level 4 if I plan to use the Gordian Knot.
Then, I would pump up Intelligence to 16 (+7).
Finally, I'd put the remaining points in Charisma to 14 (+5). It's the first attribute that gets increased by 2 so I would use a +2 Tattoo for it until then.

If I need say Strength right away to benefit from Fighter specialization and go from a score of 18 to 19, I'd sacrifice some Wisdom and Intelligence. Score needs to be 18 before leveling up to the specialization level.
If I want to get 19 Strength at level 7 then Strength needs to be 15 (+6) at start. So Wisdom, Intelligence and Charisma would be set to 14 (+15). I would use a +2 Tattoo for each of these.

To finish, some trivia:
Some checks, refer to The Nameless One not as 'Protagonist', but as 'Player1', which is the same since he always occupies the first slot. A weird variation that you can find in DAOLA, DPHINEAS and DXACH dialog files.