Adul Member Posts: 1,949
March 2018 edited March 2018 in BG:EE Mods
I'm starting a mod project for BG:EE and BG2:EE that aims to improve how the game displays items in the inventory (and stores), and also aims to stay as true to the vanilla BG experience as possible.

In the original game, the inventory showed two different images for each inventory item: the default icon that appeared when an item was in an inventory slot, and the selected icon that replaced the mouse cursor when the player picked up the item:

The default icon had no shadow, and it was either an image of the whole item, or in the case of some items like large weapons, a detailed close-up of a part of the item.

The selected icon had a drop shadow effect, and it was always an image of the whole item. In the case of large items, the selected icon was also larger than the default one, and it often exceeded the dimensions of an inventory slot.

Since the 2.0 patch, the EEs have switched to a system where the inventory only shows one image for each item, the same one for both the default and selected states:

Since the game is now typically played at a much higher resolution than vanilla was, the original icon images appear very small in comparison. EE 2.0+ only shows the 'selected' icons, which are often less detailed than the 'default' ones. The lack of variety negatively impacts flavor.

This mod aims to replicate the vanilla experience, in that it will restore variety to icons for their default and selected states. It will also feature larger icons that are created from the original icons with the help of an image upscaler tool: 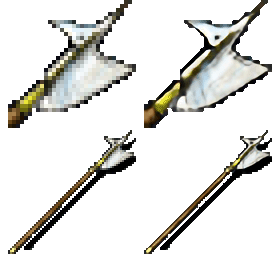 I currently plan to increase the scale of most of the default icons to 400%, since these get downscaled by the game to fit into the inventory slots, anyway, so the more detail, the better. In the case of small item icons that aren't supposed to fill out the whole inventory slot, I plan to upscale them to 200% instead.

Selected item icons will be upscaled to 200%, as on most modern resolutions at that scale the images should resemble the size that the original icons would have taken up on screen in the original game.

The result is hopefully that the game more closely resembles the vanilla experience: 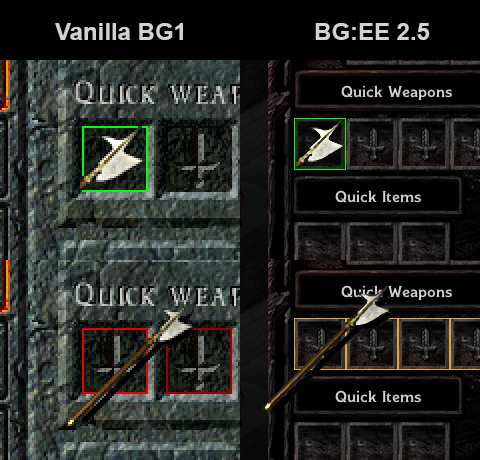 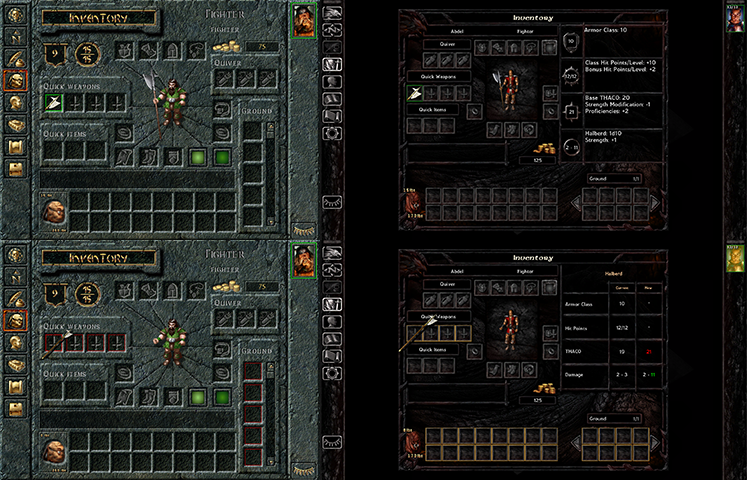 Perhaps not quite a feature right out of the gate, but I also plan to eventually make two separate icon styles for items that have different icons in BG1 and BG2. As far as I can tell, the EEs primarily use the BG2 icons, while my mod will use BG1 icons by default, but would eventually offer a choice between the two styles for all the relevant items.

I don't know how much time I will be able to dedicate to this project consistently, and there's no lack of icons to convert, so this may be a long haul thing. I'll probably see if I can release some partial versions when I get to certain milestones.

Comments and suggestions are appreciated, and if you want to help out, please let me know. And also let me know if you have a better idea for a name than "HQ Item Icons". I'm terrible at naming things.