The Tale of Polymorpho The Great

MalacPok Member Posts: 96
June 2020 in General Discussion (Spoiler Warning!)
I've started a run with the basic idea of using the Polymorph Other spell as the main tool of dealing with enemies. At first I wanted to use a Wild Mage because that kit reflects the chaotic spirit of this run, but then I realized there are no PO scrolls in BG1, so I decided on a Sorcerer. Later I realized that there's also the Wand of Polymorphing, but the run was already on and there's no turning back.

The fun really started once Polymorpho The Great reached the city of Baldur's Gate and picked up the wand. I was thinking about increasing the challenge level by only allowing the killing of polymorphed enemies, but the Coronation Fight was (near) impossible with that restriction. The Greater Doppelgangers have really good saves and even with the Greater Malison they usually avoided getting squirrelified. The most I managed was turning 3 of them into small animals, while the remaining rest obliterated those pathetic dukes. Everything else went fine. I captured some of the moments in the following video: 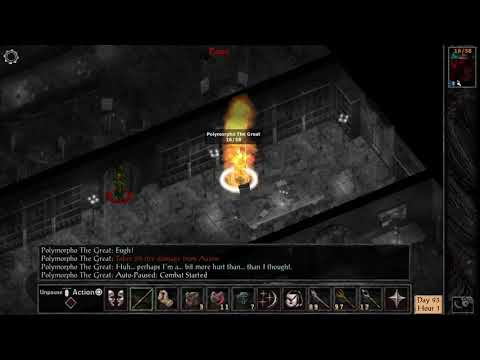 BG2 is up next. With the Robe of Vecna the casting of PO should be instant. I will try to kill all of the major enemies with this spell, and let the summons deal with the unnamed rest. Many opponents are technically immune to polymorphing so there's also that. I can't wait on turning some dragons into squirrels.