I've decided to roleplay a true neutral Kensai>Cleric character. Both of my other rolled characters (a CE Berserker and a LN Cleric/Mage) are in the beginning-ish of SOA, and I've been playing a lot of SOA/TOB recently, so preferred a return to BG1.

Also no "catchup" posts this time because I did just roll the character today (although I had the concept of the character for a while...).

Like always, these are the parameters of how this minimal metgaming, minimal reoad "roleplaythrough" will go:

-PLAYTHROUGH of the entire BGEE saga from BG1/TotSC to SOD to BG2 to TOB. Core rules, unmodded.

-ROLEPLAY. I try to create a realistic character, I use the "Enneagram" personality system to get a good personality archetype, make a bit of a backstory and choose an alignment. This basically determines which quests I end up doing, which companions I keep, what areas I explore, in what order, and what dialogue options I choose.

-MINIMAL RELOAD. To me this means I reload when CHARNAME dies but try to roll with everything else. I do give myself case-by-case forgiveness for human error and real-world issues. I will record every time I reload this time, just for my own curiosity.

-MINIMAL METAGAMING. I go in without any preconceived plans for what I'll do during the run. I try to react naturally as the character would in that moment. I have a plan for weapon proficiencies and dual classing if applicable, but nothing from a plot or companion perspective.

Part of this whole thing is I like to see how many random vanilla BG experiences I can generate just by going through it with a different personality and with different motivations. I probably average ~75% of the game's content each run. Often I miss out on some of the best equipment.

So, here is the PC build and bio for this go-round...:

Dualing at 13 means I will be a single-class Kensai through BG1, TotSC, and SOD. It will be 750K xp into Shadows of Amn when I dual--about 29% of the 2.45m xp total designed for SOA. It will take 1.35m more xp as a single-class Cleric (about 55% of SOA) to regain my Kensai skills, becoming a real "multi" at 2.6m xp, with about 350K experience to go before the classic BG2 cap of 2.95m. So at the latest, I'll be fully actualized for the final battles of SOA and then all of TOB. But I have an upfront understanding that for the large majority of the saga, I'll be playing a single class--with half of SOA being an underleveled single class. That's all OK.

Plan to focus on: 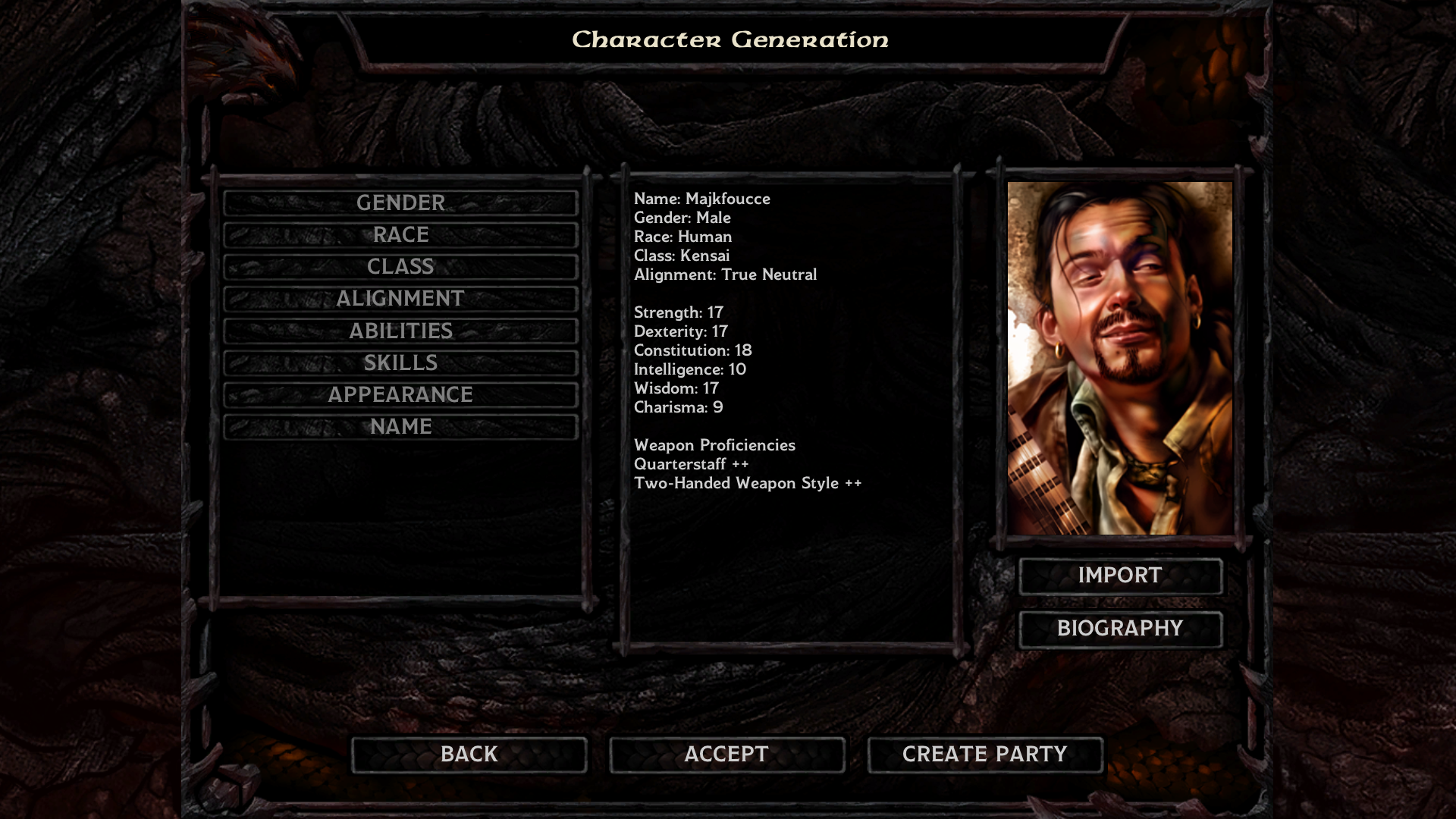 (I rolled for about 15-20 minutes, about 400 rolls I'd say, eventually felt good enough about an 88. Kept STR, DEX, and WIS at 17 (only rolled an 18/37 for STR), and maxed CON. I feel his intelligence could be a little higher for his personality/bio, but ehh not worth it to sacrifice combat stats any more, his WIS is good and high.)

Despite the circumstances of your birth and adoption, you consider yourself very blessed in your upbringing in comparison to what may have been your fate. Gorion made sure to care for your every need and provided you an education to be admired by scholars across the realm. You were a relatively smart child and as you grew older, you began to surprise Gorion with some of your wit and cunning, and wise perspectives on old dogmas. You generally have very broad and "detached" points of view of the world, which can actually lead to some keen insight, if raising eyebrows at the same time. You had an interest specifically in mythical and divine lore; some part of you has always been deeply curious about the unknown and the "universal."

But beyond that, you are a big overthinker and deeply cerebral, much preferring to withdraw and take time to ruminate on things before any sort of hasty decision. You hate to be rushed or even more generally, told what to do or scolded in any way. You have developed a very strong independent streak and yearn to be self-reliant, even if some part of you knows you will need help at various points throughout your life. You respect laws and order, but you're not entirely trusting of authority, and definitely not authoritative yourself.

Due to your excellent upbringing in Candlekeep and Gorion et al's love and assurances, you grew up to become very confident. Combined with your very introspective nature, you've learned to trust your own beliefs and self-knowledge over anyone else's, almost stubbornly so.

Meanwhile, you were gifted athletically and used martial training primarily as a way to hone your physical, instinctual side. Focused training and endurance exercises are almost meditative for you. Because of your natural speed, thinness, and lightness, you initially took on the ways of the Kensai. Through your own independent research and practice, you learned some unique (albeit rudimentary) skills that the Watchers of Candlekeep could never teach you.

Because of your wit and wisdom, you're a capable talker and truly able to treat people with respect and openness, even warmth at times (if much more rare and dependent on your mood). So you get along well enough in various tiers of society, and can even venture into charismatic and charming territory for brief spurts, although it can be draining for you. You don't get to know or trust too many people, but are very connected and loyal to the close friends that you do have.

Maybe surprisingly, you do tend to try to be optimist, even when sometimes planning for the worst. You do believe that focusing on good things can help make them happen, through prayer and service to the gods (especially Helm). Some part of you always felt you had a grand connection to the Heavens...so as your physical training as a Kensai peaks, but your intellectual and spritual journey continues, the transition into a true and powerful Cleric will be your path (whether you know it in the beginning or not).

Your main motivations in life, on a subconscious level, really revolve around having surety that all of your needs will always be met, both physical and mental. In an ideal world, you are free of distractions and have all the time in the world for your Kensai training and in-depth study of divine lore. You tend to be selfish and individualistic in your collection of resources, always looking out for your own way of life before others'. While your needs are minimalist--you don't desire to have countless riches or uncontested power--you are prone to harshly staking claim to whatever you do decide you need.

And while you do believe it's the right thing to do to help others, you tend to be risk-averse. Again, as a general rule you will put your own safety and needs before others. While there are exceptions, especially for loved ones and through times of great growth...for the most part you'd rather keep to yourself and avoid sacrifice, versus getting involved with others and having to give up anything you might not want to. In a way, most of the politics and happenings on the Sword Coast seem "beneath" you; or just very uninteresting, compared to what your own clerical interests.

The fantasy of escape to a life of comfortable, contemplative solitude, somewhere away from all your responsbilities, is always in the back of your mind. While others may be personally drawn to you, and you may even reciprocate at times, you will always be a "loner" on a fundamental level.
Post edited by Selerel on July 27