Fifty ways to kill a Kangaxx

jmerry Member Posts: 2,809
October 2021 edited October 2021 in Baldur's Gate II: Enhanced Edition
This one owes its origins to a joke on the forum some time back; someone saying that there must be fifty ways to kill your Kangaxx. Well, I do have a Paul SImon compilation album, and that's a very good song ... so I decided to filk it. With guide-worthy illustrations, starring a collection of BG2EE NPCs.
The problem is all inside your head she said to me
The answer is easy if you take it logically
I'd like to help you in your struggle to be rich
There must be - fifty ways to kill that lich

Ooh, chop him up well, Kel
Make a new plan, Jan
He can be burned, Cernd
You just get his ring free
Shine like a boss, Ras
You don't need to discuss much
Just mace for the win, 'men
And get that ring free

She said: It grieves me so to see you imprisoned
I wish there was something I could do to save you from that end
I said: I appreciate that, and would you help my friends
About the fifty ways?

You just enrage some more, Kor
Hide from the dead, Ed
You say no to it all, Val
Just keep yourself free
Oh, deflection is fair, Haer
You don't need to discuss much
Just immunize me, 'rie
And keep us all free [6]

Enrage some more, Kor
Hide from the dead, Ed
You say no to it all, Val
You just listen to me
Deflection is fair, Haer
You don't need to discuss much
Just immunize me, 'rie
And keep us all free

And now, the guide portion of this post, illustrating the song's points. For the first half, we focus on how to efficiently hurt the demilich Kangaxx. He's immune to cold, electricity, poison, weapons of less than +4 enchantment, spells of levels 1-9, and various status conditions. He's 90% resistant to physical damage. And because he's wearing the Ring of Gaxx, he regenerates. That still leaves plenty of options. 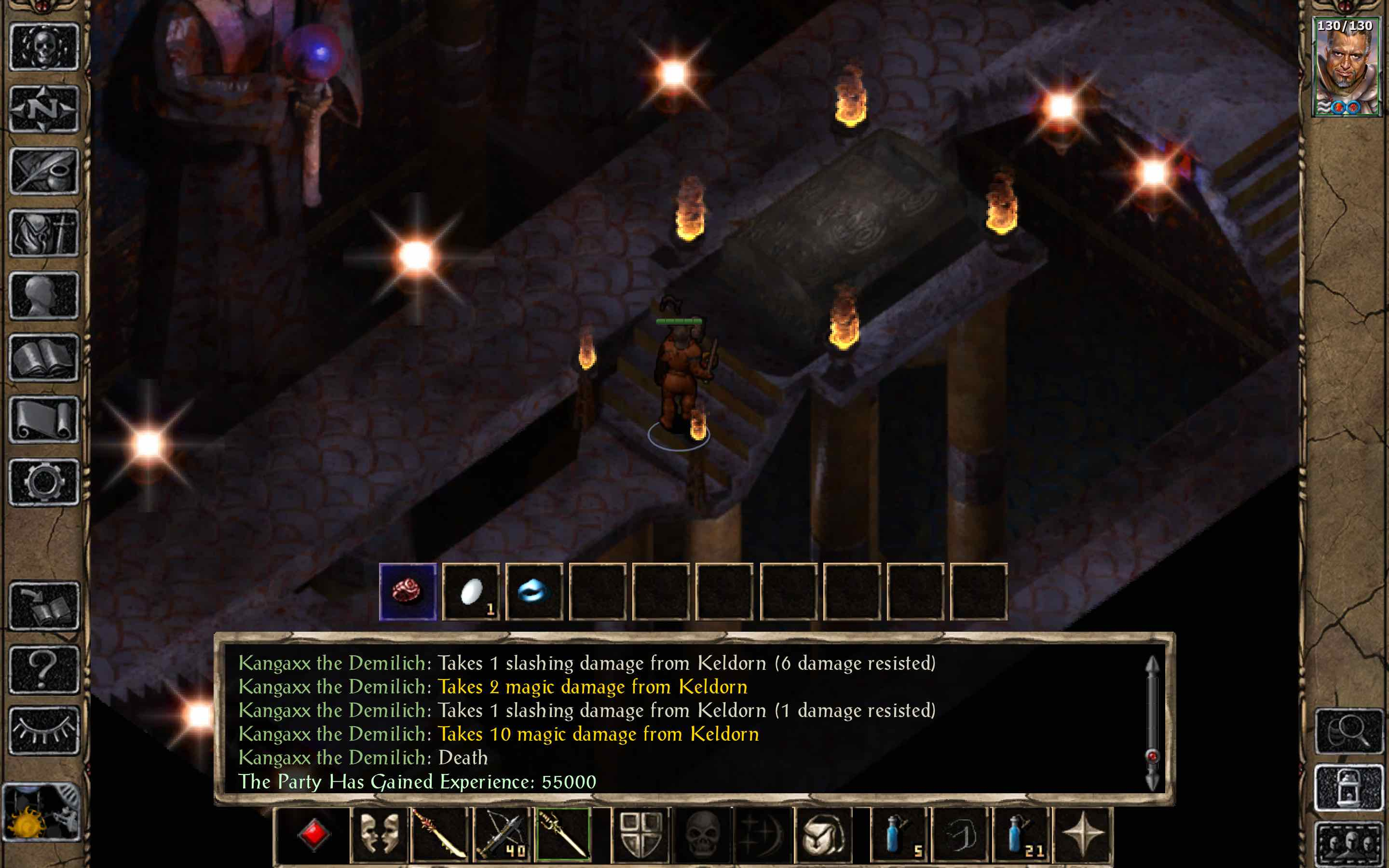 The sword Daystar, found in the secret room of the inn at the city gates guarded by a lich, is extremely effective. It hits as +4 against evil creatures and does large amounts of bonus damage versus undead. All of that undead bonus damage is of the"magic" type, which the demilich doesn't resist at all.
For this shot, I had Keldorn wield it. 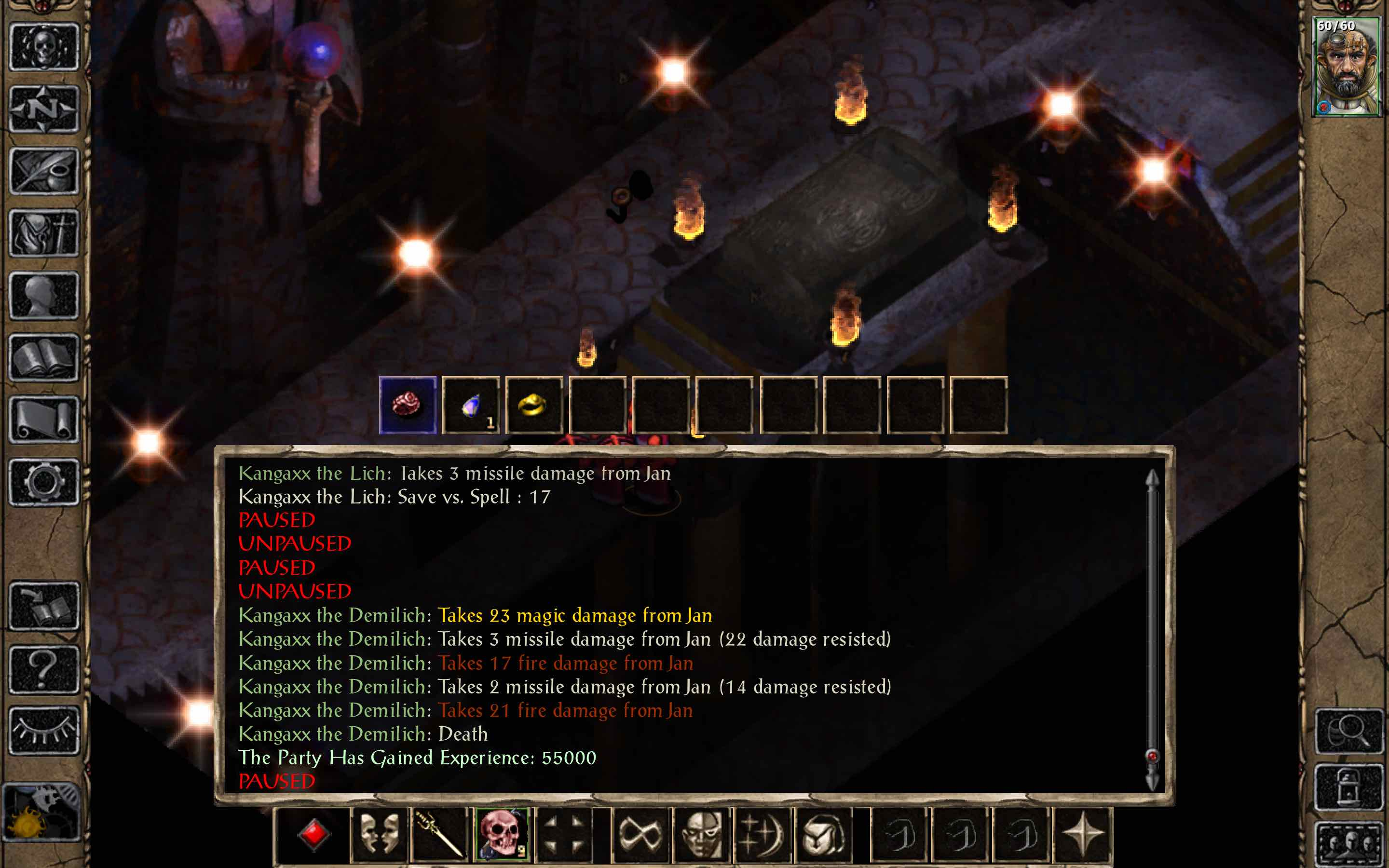 Direct mage and priest spells won't do any good, but thief traps will. Of particular note, the HLA Spike Traps deal magic damage and the level 15-20 version of the normal traps deal fire damage. Any traps you lay in the center area will hit Kangaxx's lich form... so we need to lay traps somewhere else and drive him over there. Enter the Ring of the Ram. It deals considerable magic damage and pushes its target away from the caster - preferably toward some traps you set up.
For this shot, I had Jan provide the traps. 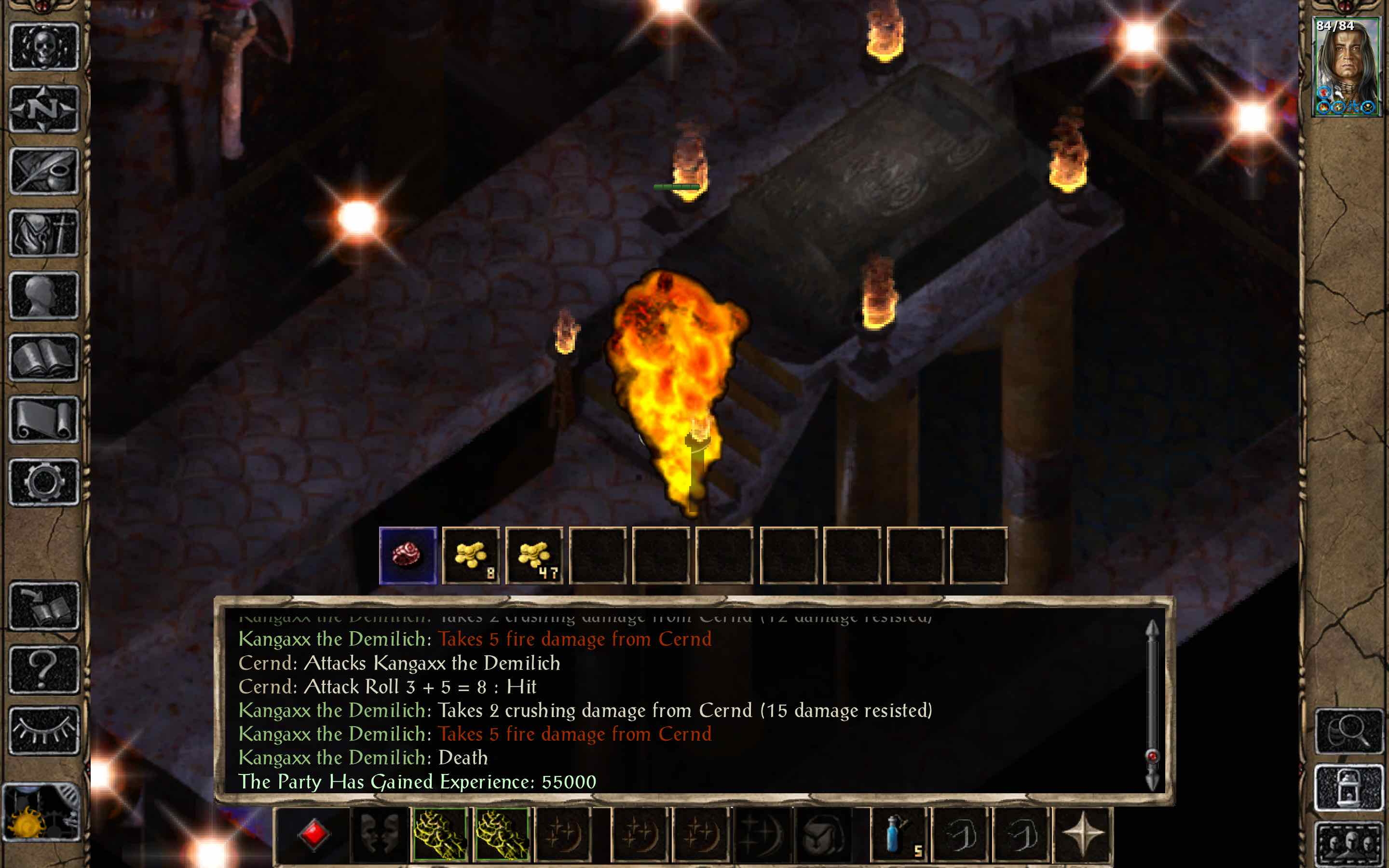 Fire elemental attacks strike as +4 and deal fire damage. A perfect combination for hurting the demilich.
For this shot, Cernd is using the druid's Fire Elemental Transformation HLA. 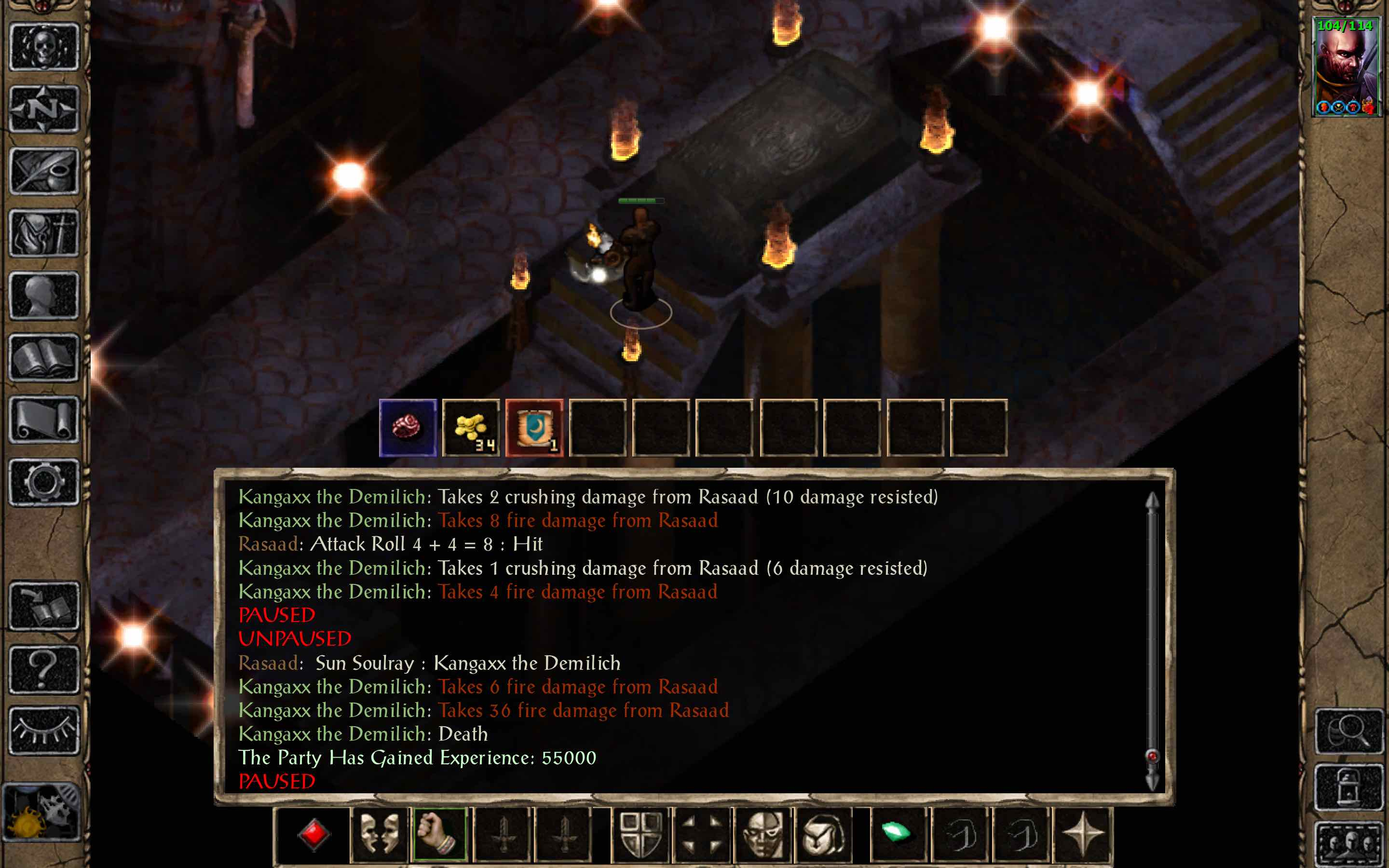 The Sun Soul Monk kit has abilities which seem perfectly designed to hurt a demilich. Of particular note, Sun Soulray deals 5d8+6 damage against undead, striking at level zero so it goes through the demilich protections and dealing more than half of Kangaxx's hit points on average. In melee, a level 25+ monk's fists hit as +4, and the Sun Soul Monk can enhance them to deal an additional 2d6 fire damage for a few rounds with Flaming Fists.
This shot goes to Rasaad, of course. 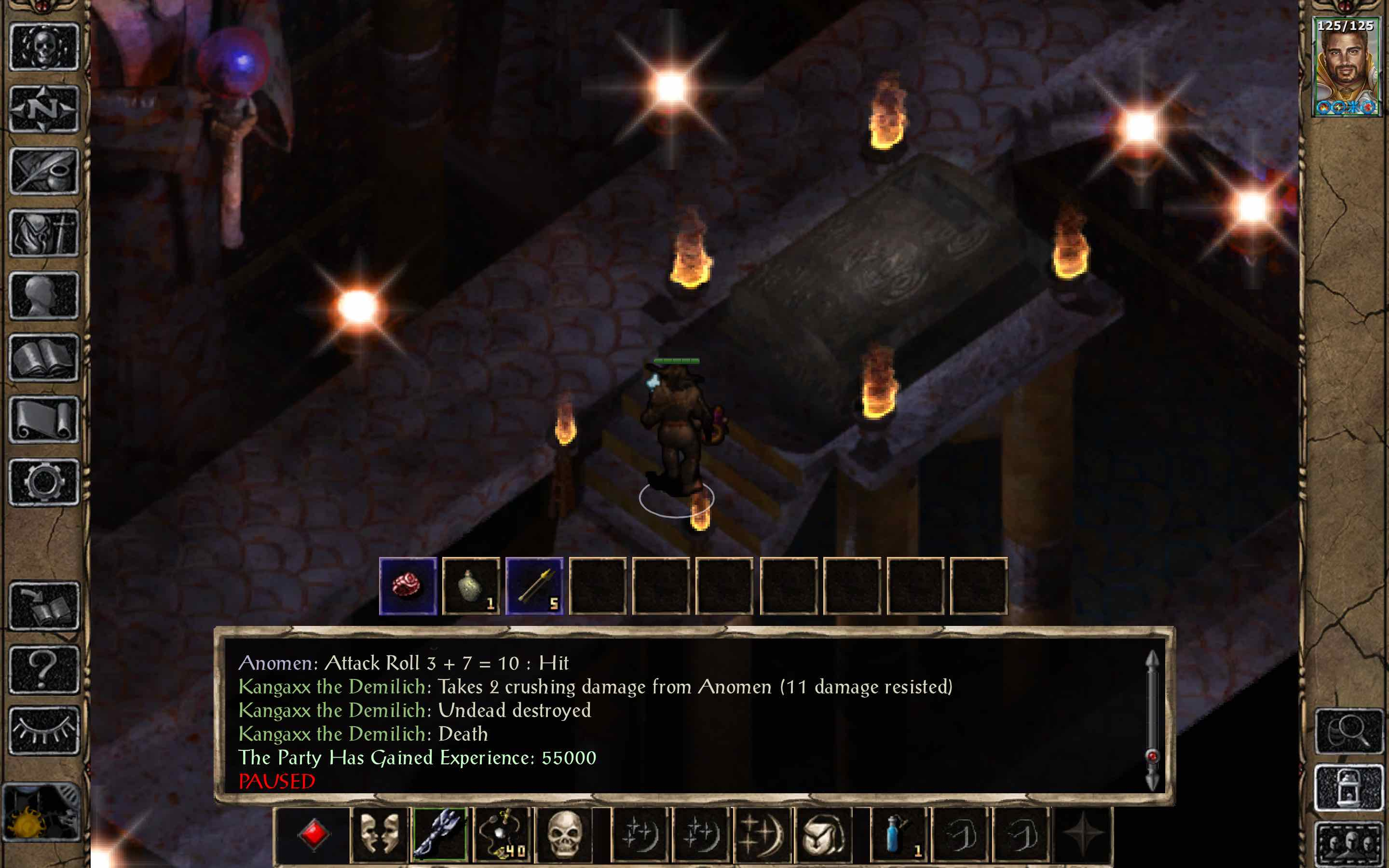 The Mace of Disruption can destroy undead. Kangaxx is not immune. He's resistant to the bonus damage, but it's a 45% chance of dying instantly on any hit with the mace. You do need the improved version here; the basic version only hits as +3.
Anomen wields the mace in this shot.

But of course, offense is only half the battle. You also have to survive. The demilich opens with a Howl that is equivalent to Wail of the Banshee - save vs death or die. Protecting against that is fairly routine; boosted saves or Death Ward. After that, he switches to Imprisonment, about twice per round. And that's considerably harder to defend against. There is no saving throw. Magic resistance won't help. Still, there are options. 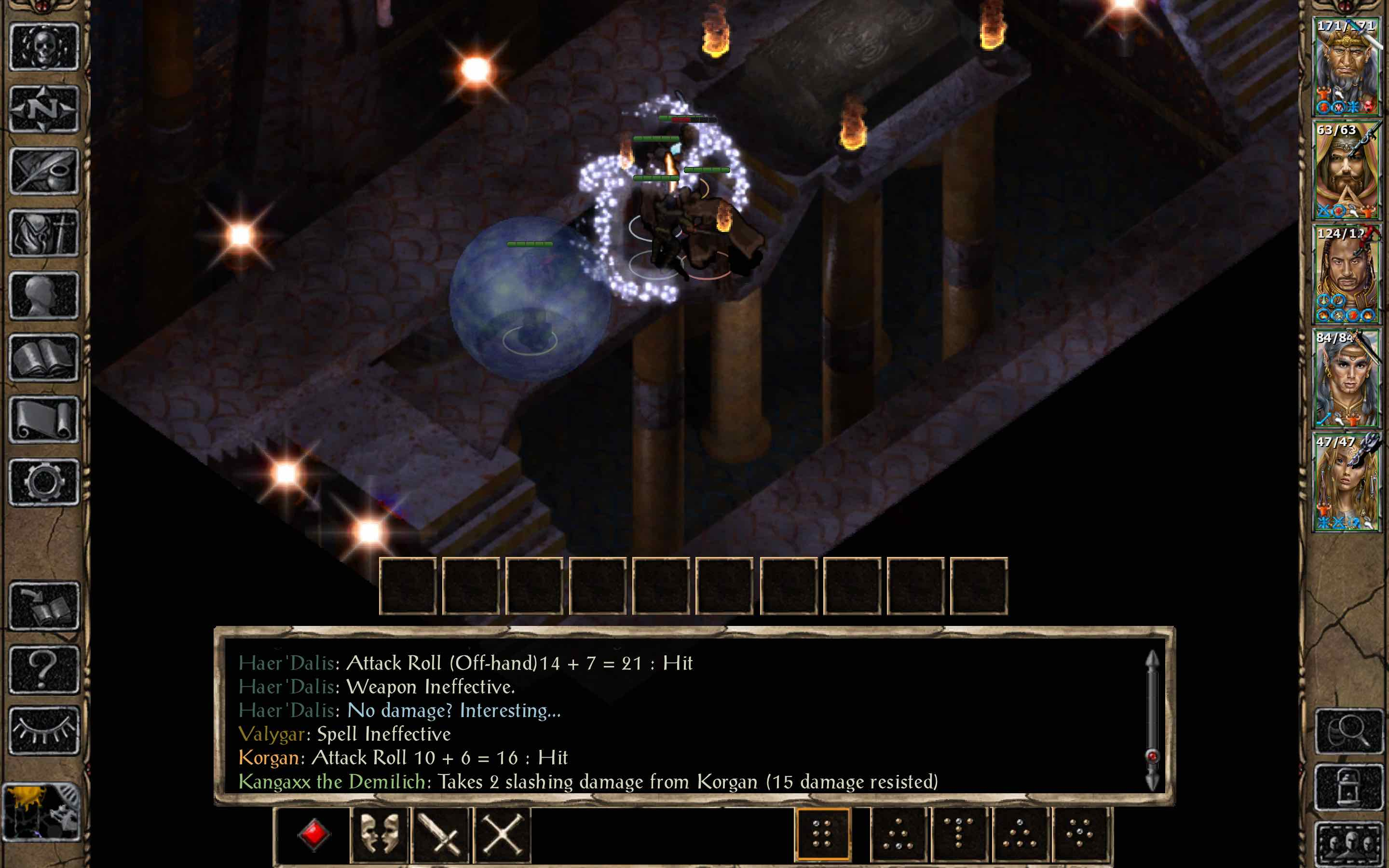 I went with a group shot on the protections; five members of the party each using different methods. (Additional buffs for the party: Haste, Strength of One)
- Korgan uses the berserker ability Enrage. Ten rounds of immunity to imprisonment, among many other things.
- Edwin uses a Protection From Undead scroll. The demilich simply can't see him. And in the current version, you don't have to worry about this interfering with the script that turns lich Kangaxx into his demilich form; he initiates conversation once he goes down to one hit point, just like without the scroll.
- Valygar uses a Protection From Magic scroll. Immunity to level 1-9 spells, just like the demilich has. That includes both of the spells the demilich uses, leaving the scroll user to attack with impunity.
- Haer'Dalis uses Spell Deflection. This is less effective than the other options, only blocking two shots of Imprisonment before being exhausted. Still, that buys you time. And Spell Deflection/Shield of the Archons is available to all bards, clerics, druids, and mages. I also tested Spell Turning ... that one reflects the Imprisonment right back on the demilich, instantly ending the fight. You do at least get the ring, as it has the "critical item" flag.
- Aerie uses Spell Immunity: Abjuration. Immunity to Imprisonment, for as long as it lasts.

[Edit: fixed a typo in the song, tweaked the formatting to set it off a bit more]
Post edited by jmerry on October 2021