I cannot quite get what it is on the hilt of Lilarcor greatsword in the BGII picture. 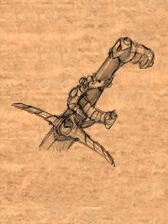 Cannot find any appearance description of it. Do you know what it looks like, or do you have your own visualization?

Since I had no idea what is on the hilt I always visualized shape of human who hugs blade, grip and guard, all at once, holding them together.