Help me make my Power-gaming party of heroes, enjoy the discussion :)

Sweron_Dern Member Posts: 8
May 2020 in Icewind Dale: Enhanced Edition
Here we go, decided to try this party even thou I'm always unsure about few choices and you can't put everything you want into one party. I'm not new to Icewind Dale, but there is tons of stuff I haven't yet tried or forgot and that's why I ask for help of the veterans.
Besides, its always more fun when people are gathered and enjoy talking and developing something together

Wanted to make all moral goodies party for strong cleric buff "Righteous Wrath of the Faithful" + some really "good only" items like Shimmering Sash, but there he is , that druid always has to act special

Also I decided to cut Swashbuckler out, and instead make him Thief/Illusionist gnome that fills the wizard and thief role which I don't really like to have much in Icewind Dale.
Also, Helm of the Trusted Defender is too good, needed one guy who can wear it.

So, here are the members of my party: 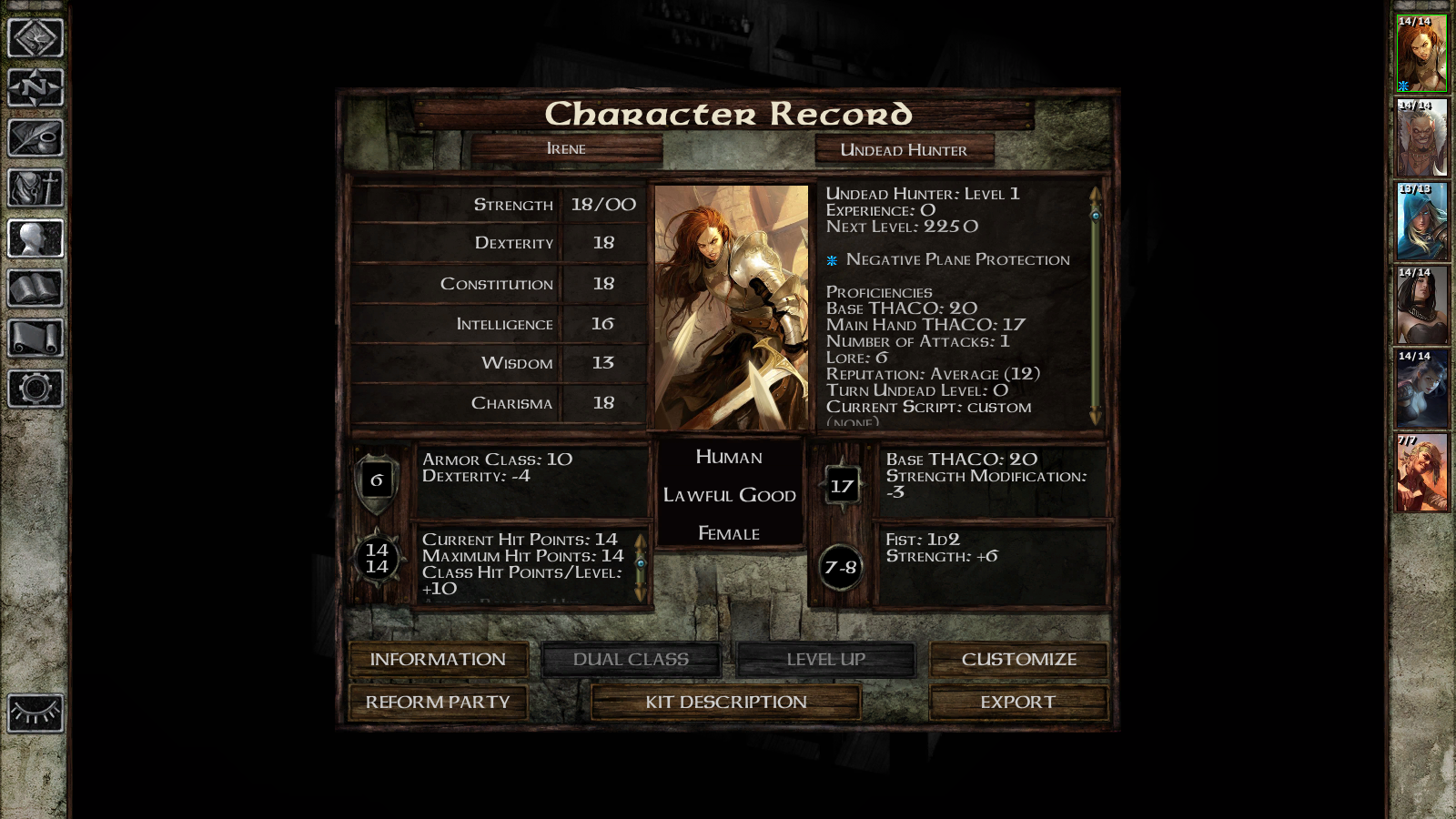 Irene, I always have a Paladin in a group, it is how I envision a charismatic group leader. Also, best weapon in the game "Pale Justice" is for Paladins only. Tried Undead Hunter this time, even thou I think Cavalier is more powerful or endgame, this time my Paladin will actually use ranged weapons too (crossbow).

proficiency : long swords - best weapons (Pale Justice, Sword of Aihonen, Sword of action+4), crossbow for range attacks and maybe bastard sword later just in case I find a good one + I like bastard swords even thou I don't feel they got the love they deserve in this game. she will dual wield long swords, preferably 2x Pale Justice for HoW difficulty 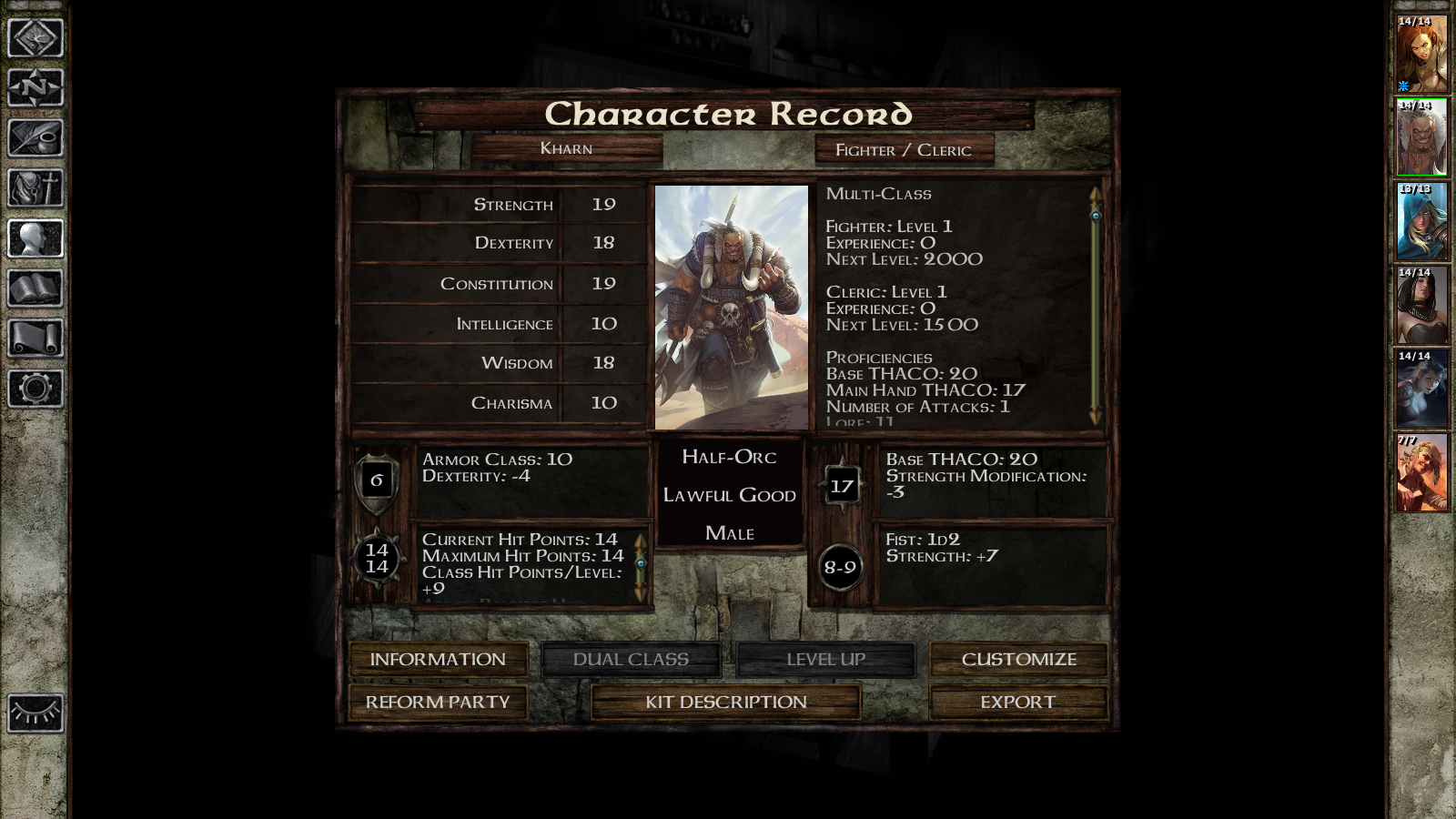 Kharn, between cleric/ranger, fighter>cleric, decided to go with strong brute half-orc cleric 19/18/19, making him strong from the start. what would you pick if it was your party ?
He will dual wield flails/morning-stars as there is abundance of good ones in this game, also warhammers second and mace weapons later. 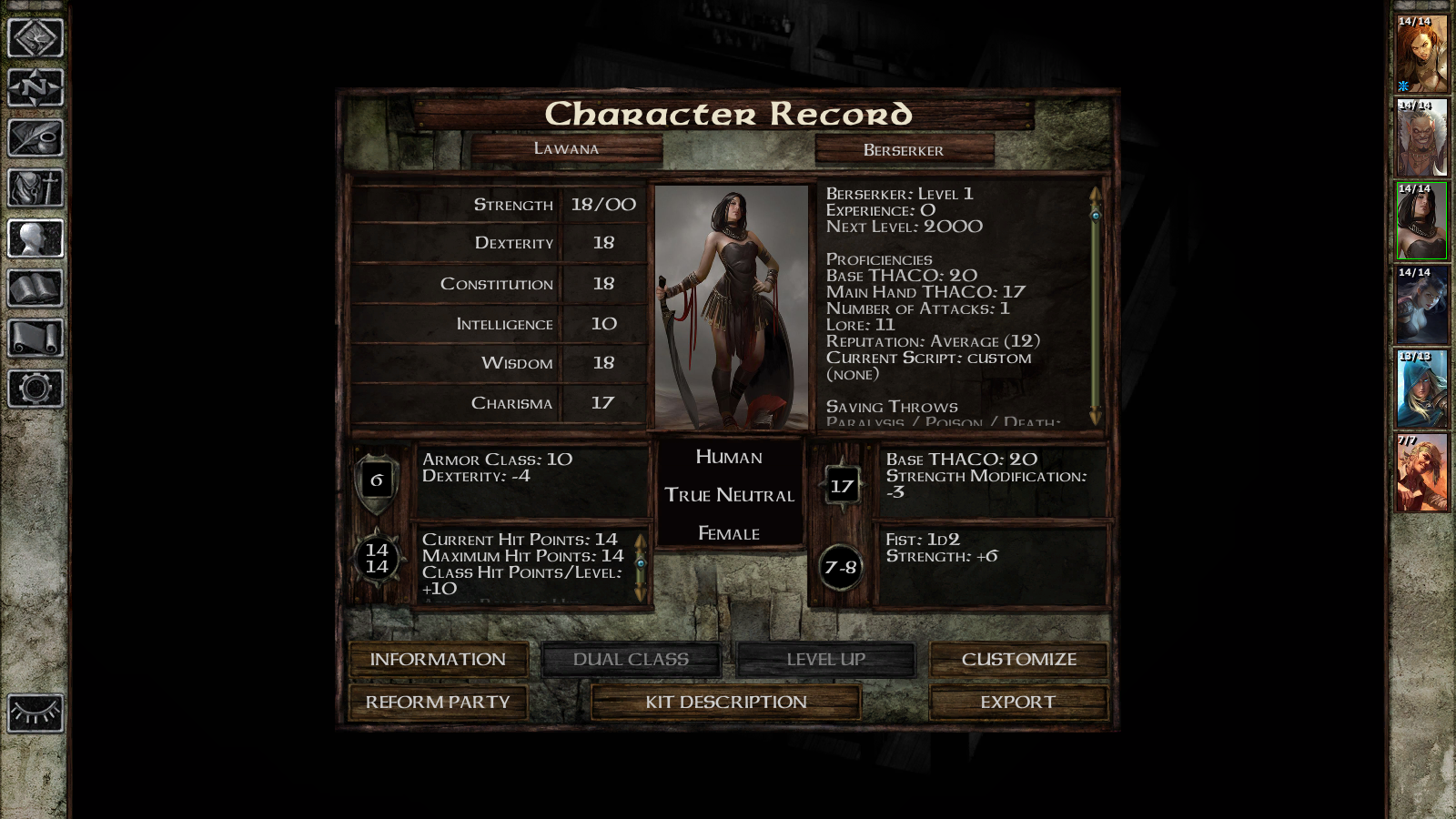 Lawana will be my berserker dualing into druid. I usually don't like druids too much, don't feel like you need them even thou they are probably stronger here than in BG games.
now the question is, do I need Druid early at level 3 or 6 ? Or could I wait till 13 to get all the bonus attacks per round you get as a fighter class and all those thac0 per levels ?
Proficient in dual wielding scimitars, that's the best choice for druids ?
Or maybe go for that +5 spear you get from Salamander Queen ? 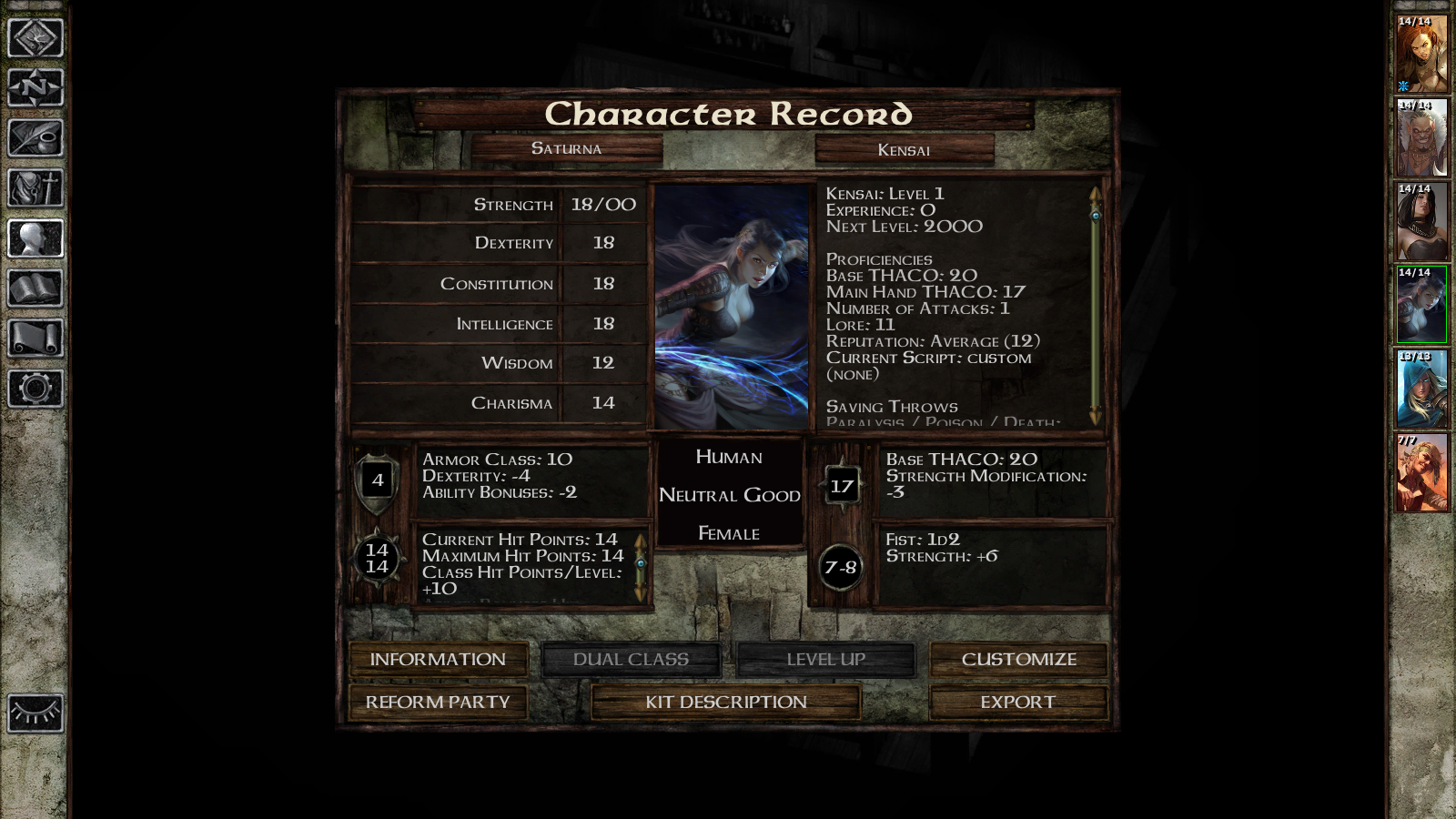 Saturna, probably my strongest endgame fighter once she learns to buff her majestic blade dancing artistry of hack & slashing with impenetrable magical defense :P
Eh, I usually envision kensai chars to use katanas, but I'm not sure about it, don't have much room to pick more than one weapon for grand mastery before I dual her to mage.
So I'll probably stick with axes and swords cause I want someone to wield those strong axes I find, even thou long swords would probably be the best choice lategame (2x long sword of action+4 ? ) What do you think guys ? 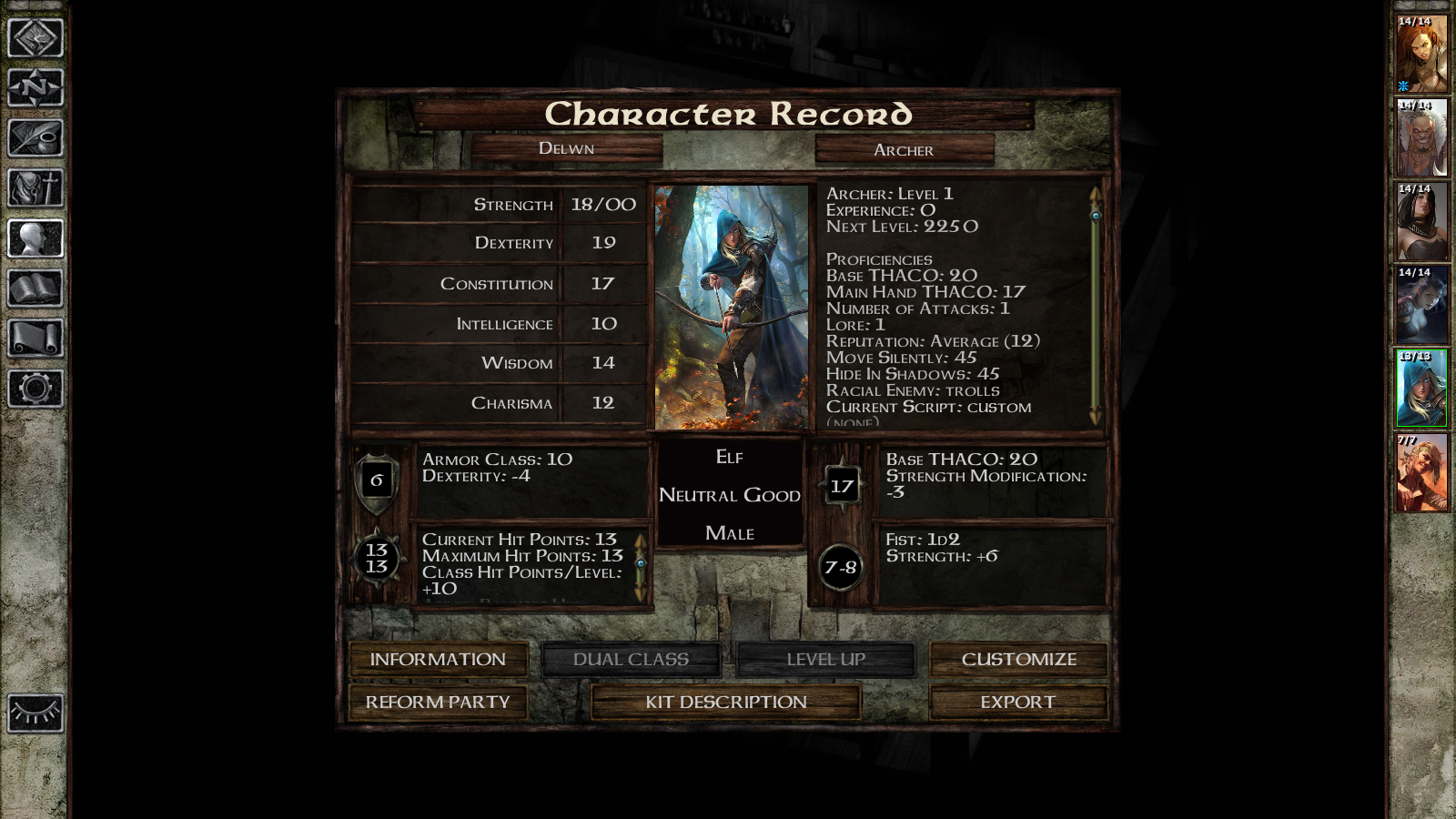 Delwn, an elven archer, now this is always juicy to me, just immagine longbow +4:hammer oh him ^^ total overkill
single class who is always getting stronger just like Kensai, love it. 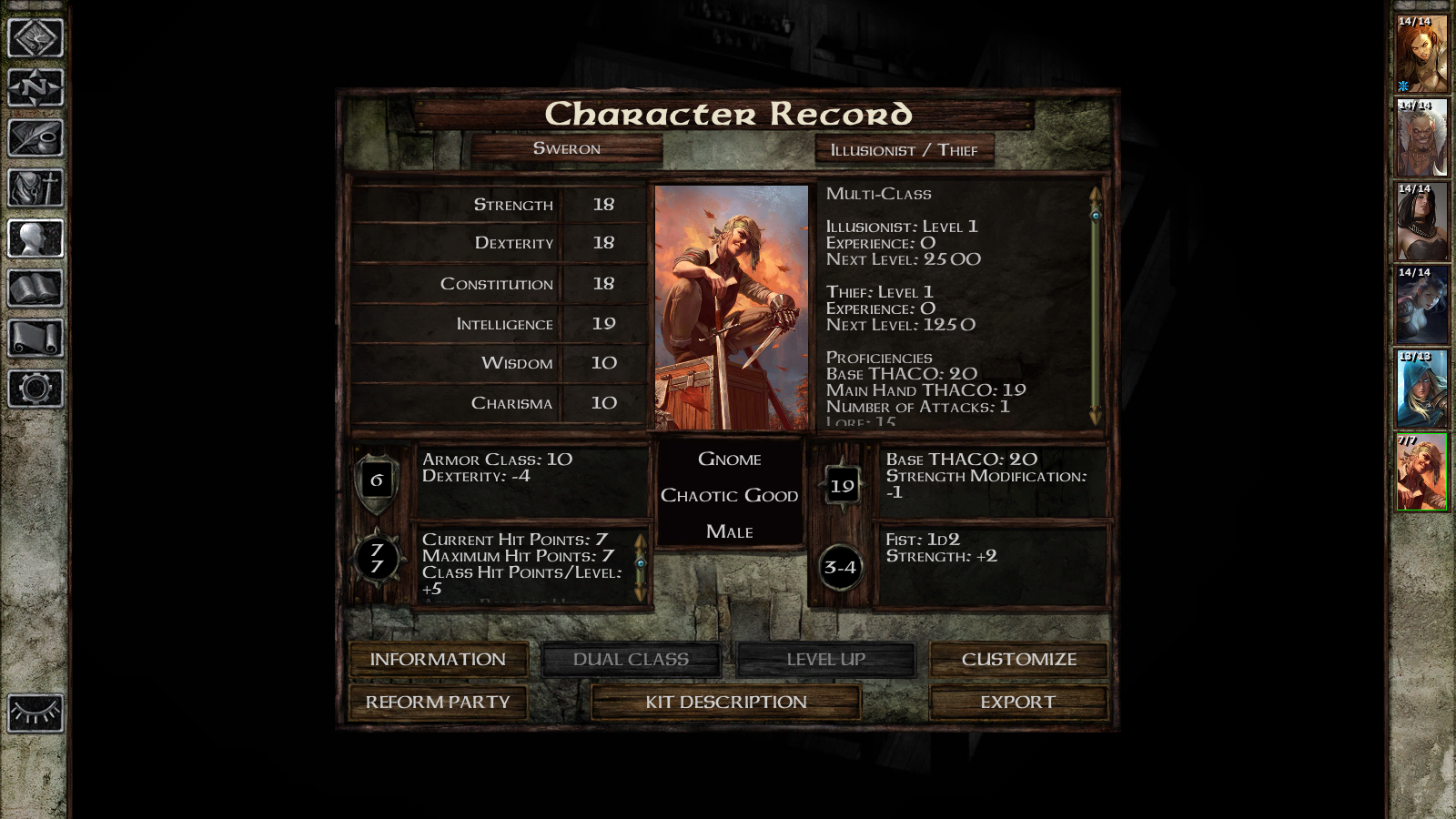 and finally Sweron, my fictional char I use in most of the games ^^ he's actually human but had to make him a gnome here to fill the position of thief and mage and also to have a guy who can wear that OP HELM

I really wanted to play Swashbuckler and dual him waaaay late into the game so I end with 25/30 swashbucker>fighter who is a menace but well, another time maybe.

I like him for roleplaying purposes to stick with pointy wepons like daggers, darts, short swords. Usually I pick crossbow / slings for my thief.

Ok that's it for now, I'll give this a try for a while then I'll decide if there needs to be changes before I delve far into the game, I'm interested to read your comments 1st