877. You've been telling your six and five year old boys the story of Baldur's Gate as a bedtime story and when you get home from work, the six year old shows you this: 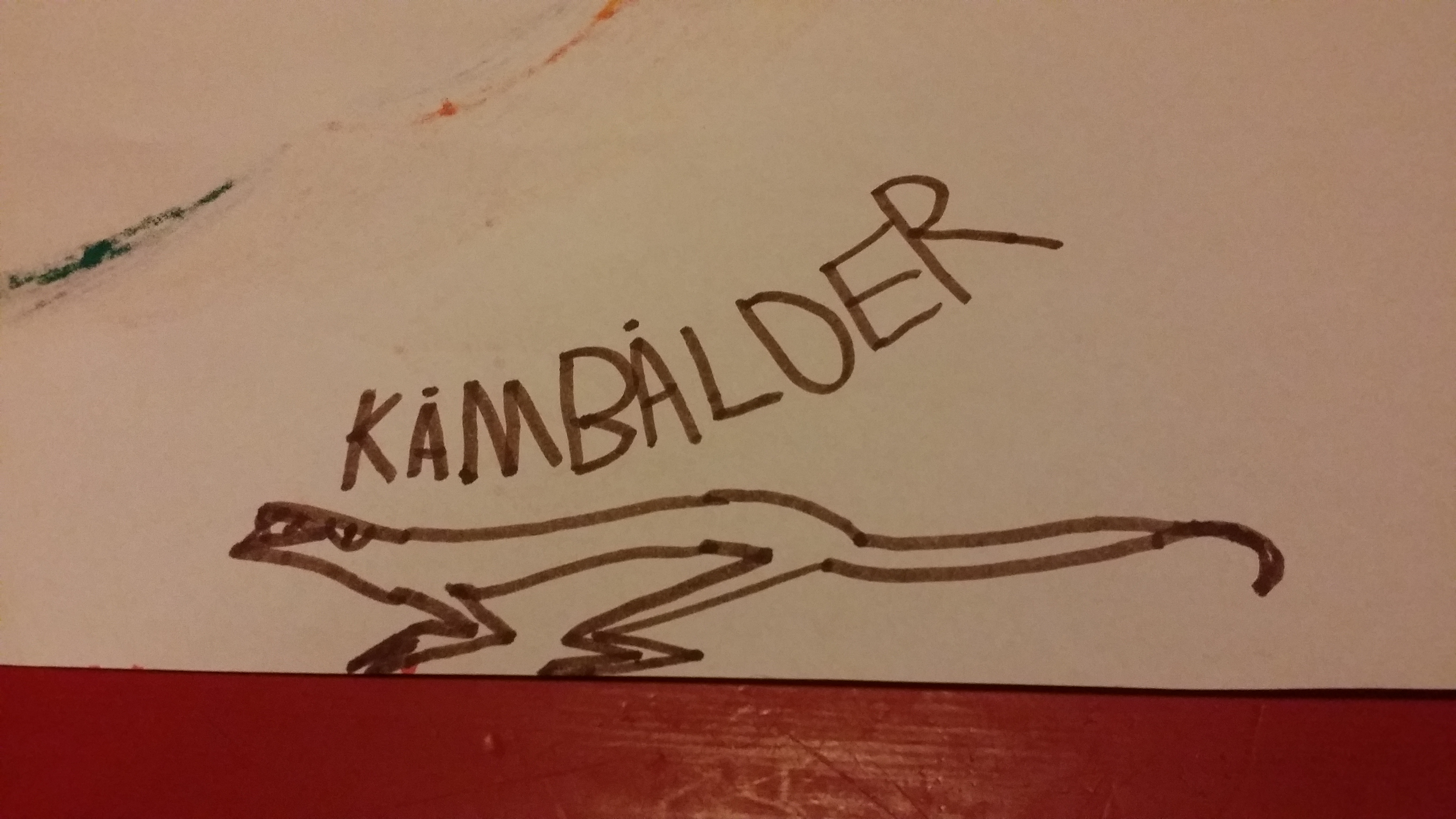 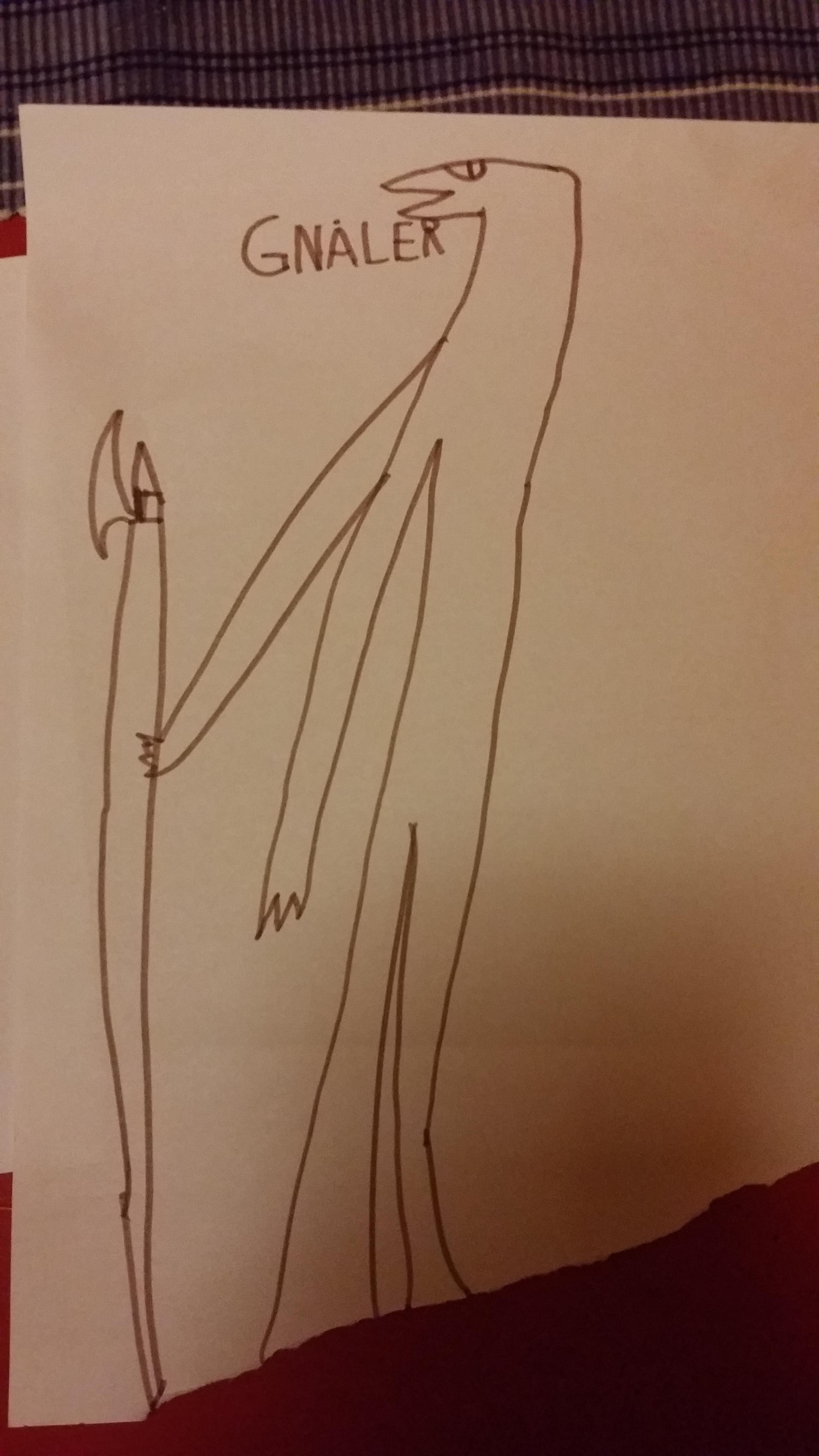 This inspired me to do the same with my kids. I've decided to share with you all how it is going.

My son is 5 years old, my daughter is 3 years old. I started off by having my boy design Charname. Here is what he came up with.

So I started off with candlekeep and Gorion, letting my boy design the character. I described it as a castle filled with books where Gorgia and his father lived. Then one day, his father...well, you know that part of the story. So they run away and come across "a big man, covered in armor. Seven feet tall! The big man has two ogres with him." I then recite the dialogue from memory, because all of us can.

As I do this my boy has his eyes wide and is listening intently. I don't dwell on the part where Gorion dies, instead just saying that the armored man won and Gorgia ran away. I then bring in Imoen, Gorgia's sister. My girl bubbles with excitement at this, and likes that she has a bow. Well, or just likes that there is a sister involved. She is sitting on my lap, but has to get off to talk excitedly about...something. Her pronunciation isn't too good.

I stop here to ask my boy if he knows what a mine is. I end up explaining it to him, and getting him to the point where he understands why making the metal break is bad. He tells me that Gorgia will go help.

I say that is enough for this night and my boyo insists that I keep telling the story. So...we go on.

Gorgia gets to the mine and I tell him that the owner of the mine says: "So you want to take a look at me mine, do ya? Well, I'll give you one day. But I warn you! People who go into that mine, they don't come out. And I don't know why. It is really dark down there. Are you sure that you want to go in"

My boyo tells me that Gorgia runs away.

I tell the boyo that Gorgia has a sword and lightning shield and that his sister has a bow, and that they should help people. So Gorgia gathers his courage and goes down.

They get ambushed by kobolds. As the arrows come in, hitting Gorgia's shield I hit the bed, making it shake. I describe how his sister uses her bow to shoot he kobolds. My girl is quite happy at this.

Now, I ask my boy who he thinks is behind this. His response? "A green piggy." (He is an Angry Bird fanatic)

Ok, I can work with this. So Mulhay is green. That makes everyone happy. I go through the dialogue and Gorgia decides to trust Mulhay and to read the letters. My boy is quite surprised when Mulhay betrays him. It is a good thing that Gorgia has this 'lightning shield', which he uses to beat Mulhay down and take his letters.

So...score one for the good guys.

I try to stop the story there and to get them to bed, but my girl is excited and the boyo refuses to let me go, asking me to keep telling him the story.

So Gorgia tracks down the green man's friend, a wizard, to find out why Mulhay was poisoning the metal (yes, I know it should be ore, but there is already enough info here for a 5 year old). The wizard threatens Mulhay. And what comes of this?

Good thing that combat was described for me! Saves me the effort, I suppose. So the wizard tells Gorgia that someone was paying him and the green man to poison the metal and that there were other people stealing all of the other metal, so no one could have it.

I then had to explain to the boy the economics of stealing all of the metal so you can sell your own for a higher price. I ended up explaining it using pizza as an example. It was easier.

I tell the boyo that we are ending it there. He refuses again and demands that I keep going. I am firm this time. I give him and his sister a kiss and a hug and say that we'll go on tomorrow night.

(For anyone who is wondering why the boyo gets more attention here, it is because my girly is only 3. So just mentioning the sister is enough for her. I gave her choices, but it always meant her going off on a tangent which doesn't fit into any of the above. As such, the boyo gets to be Charname).

And that, thus far, is what happens when a 5 year old gets to be Charname in Baldur's Gate.