A lark: play as someone else

chimeric Member Posts: 1,163
October 2017 edited October 2017 in General Modding
In case you wanted somebody else to be the hero of the saga of the Great Bhaalspawn, and the character you generate only his, or her, chronicler or maybe companion, a sort of Imoen to CHARNAME, you should know that you can. The hero can be Imoen herself, or Minsc with Boo, or Coran, or anyone else that you encounter. I've touched on this a while ago, but now I've sat myself down to write the scripts for it.

Here is how it works. Scripts in the games rarely, if ever at all, refer to the protagonist using the unique object, Protagonist. In every case that I know (and if there are a few exceptions somewhere, they are easy to rewrite), the engine refers to the character as Player1, because he is the first character to be created and join the party - and cannot normally leave it. Having staked his claim to that spot, he remains Player1 until ascension to godhood several sequels later. But the engine can be ordered to evict Player1 and take someone else instead. The engine is hungry, you see, for all of the Player roles to be filled, starting from the first. It fills every gap in that order. If there is no Player1 in the party, the next creature to join will become Player1. And now I know how to make the game remember the change and rewrite all of the references.

The ring in the attachment, type it in with CreateItem("xring_#"), will impose a self-deleting script on the party member you target. It won't affect any of the existing scripts. You need at least three people in the party. Give the ring to someone who will stay, then enable party AI and have him target the current Player1 with the first ability of the ring. After the main character drops out, target the one you wish to replace him. Then talk to this one the usual way and invite him back to the party. He will assume the place of Player1. Now use the second ability of the ring on the former main character and talk to him to get him back in the party. On the Reform Party screen you will see that the new hero of the story can no longer be evicted but his companion (you) can. In all of the addresses, greetings, bounty notices and letters future and past the name of the hero will also be replaced - though he must live with Gorion as his foster father.

Will this cause any problems? I'm quite certain that it won't within the first BG game. I can't say how things will go in the sequel if you play as Imoen, when she gets kidnapped by Irenicus. You can switch back before that any time by following the same procedure - though only losers do that! 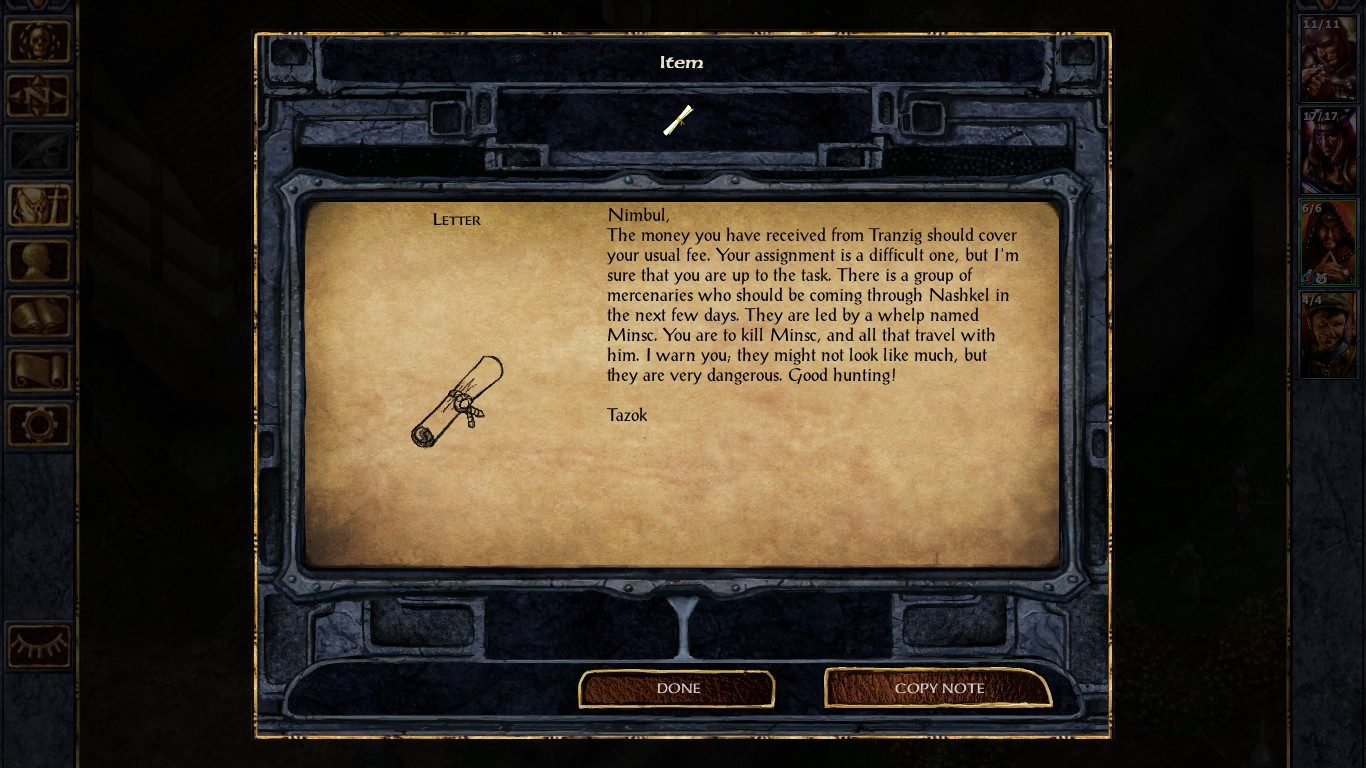 Ring of Humility.rar 549B
Post edited by chimeric on October 2017