The Curse of The Beggar *Minor Spoilers*

Cinderon Member Posts: 1
April 2013 in Archive (General Discussion)
So, me and a friend picked up Baldur's Gate and started playing together. I rolled a Sorcerer, he rolled a thief. All was well.
We went through prologue, and suddenly we found ourself in a slightly precarious situation.
With no money, food or home my good friend decided, being a thief and of evil alignment, that it was time to go robbing.
Sadly, he hadn't put a very high score into pickpocketing and kept failing, making the intended victims go hostile, and forcing us to kill them to silence them.

I had no idea how right I was.

After a failed attempt to pickpocket a beggar (I know, but we were desperate!), we were chased out of town by the guards, forced to live as common bandits in the woods, yada yada yada.

A few hours of gameplay later, we realized something was amiss. Just at the edge of our vision, we could sometimes spot movement. A hunched figure in rags were following us.... 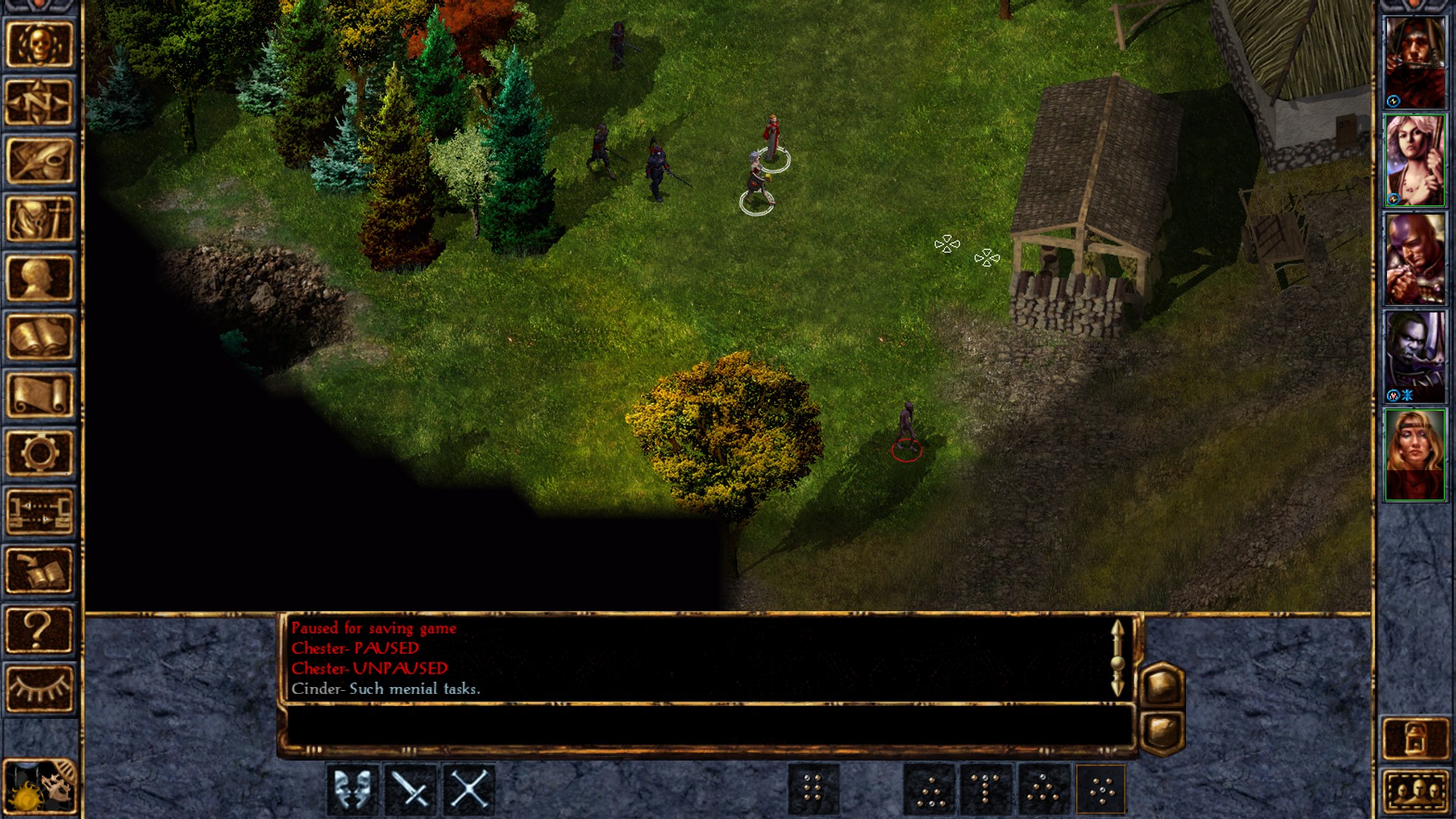 We didn't pay much attention to it at the time, we had bigger problems to deal with (such as being hunted by various bounty hunters and guards, and wildlife trying to chomp on us), but eventually we chased down and caught our stalker. It was The Beggar. 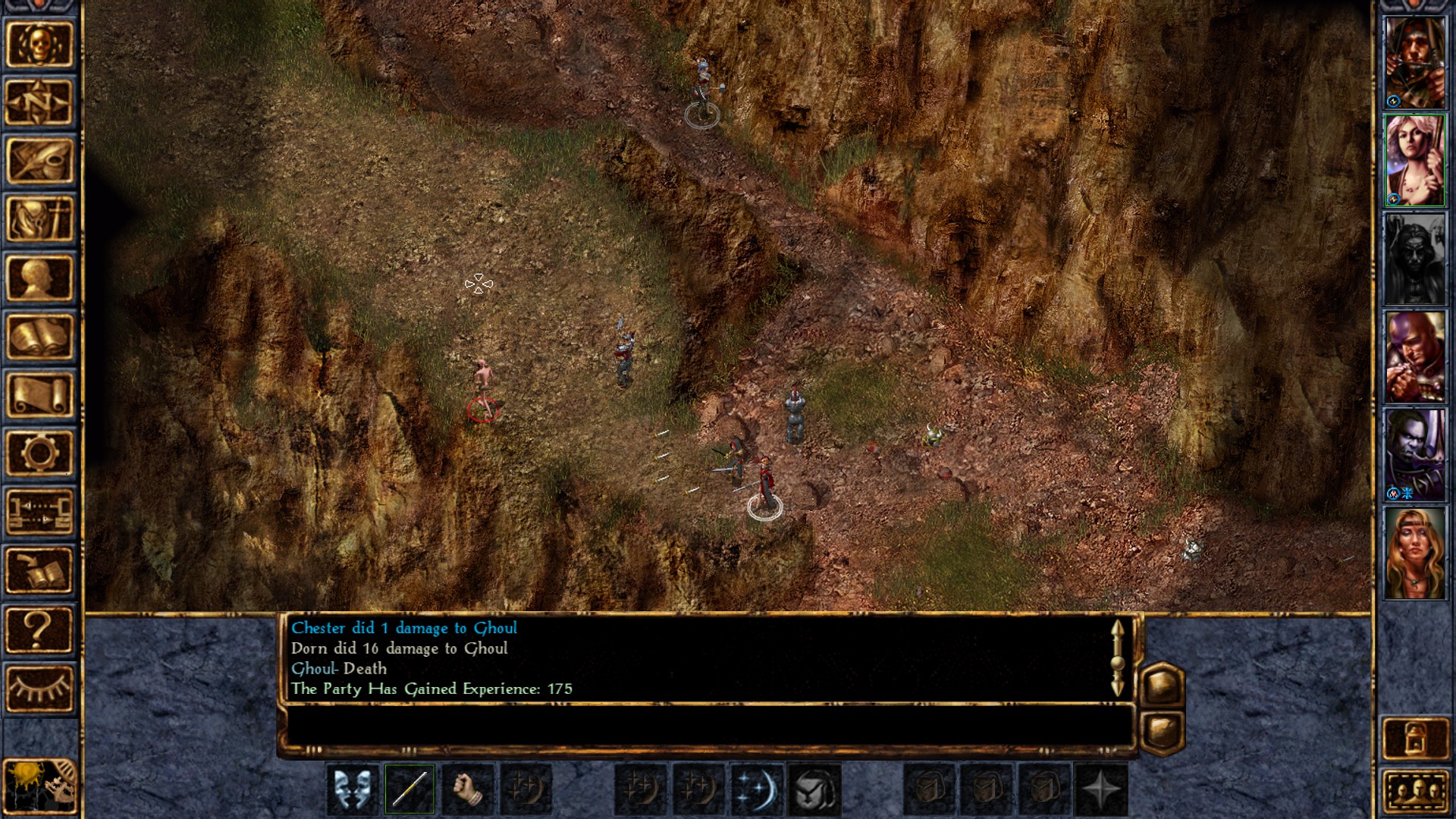 I was perplexed. My friend was highly disturbed. At this time, we had become reliant on Minsc to plow through our enemies for us (As we ourselves had spectacularly failed at rolling viable characters). But with our already dangerously low reputation poor Minsc couldn't handle the pressure of killing an "innocent beggar" (HAH!) so we decided to let him be. Man was that the wrong decision.

It was at this stage that shit began hitting the fan.

After encountering the beggar a few more times (with my friend becoming increasedly disturbed and afraid of the half-naked stalker), we ran into something peculiar. 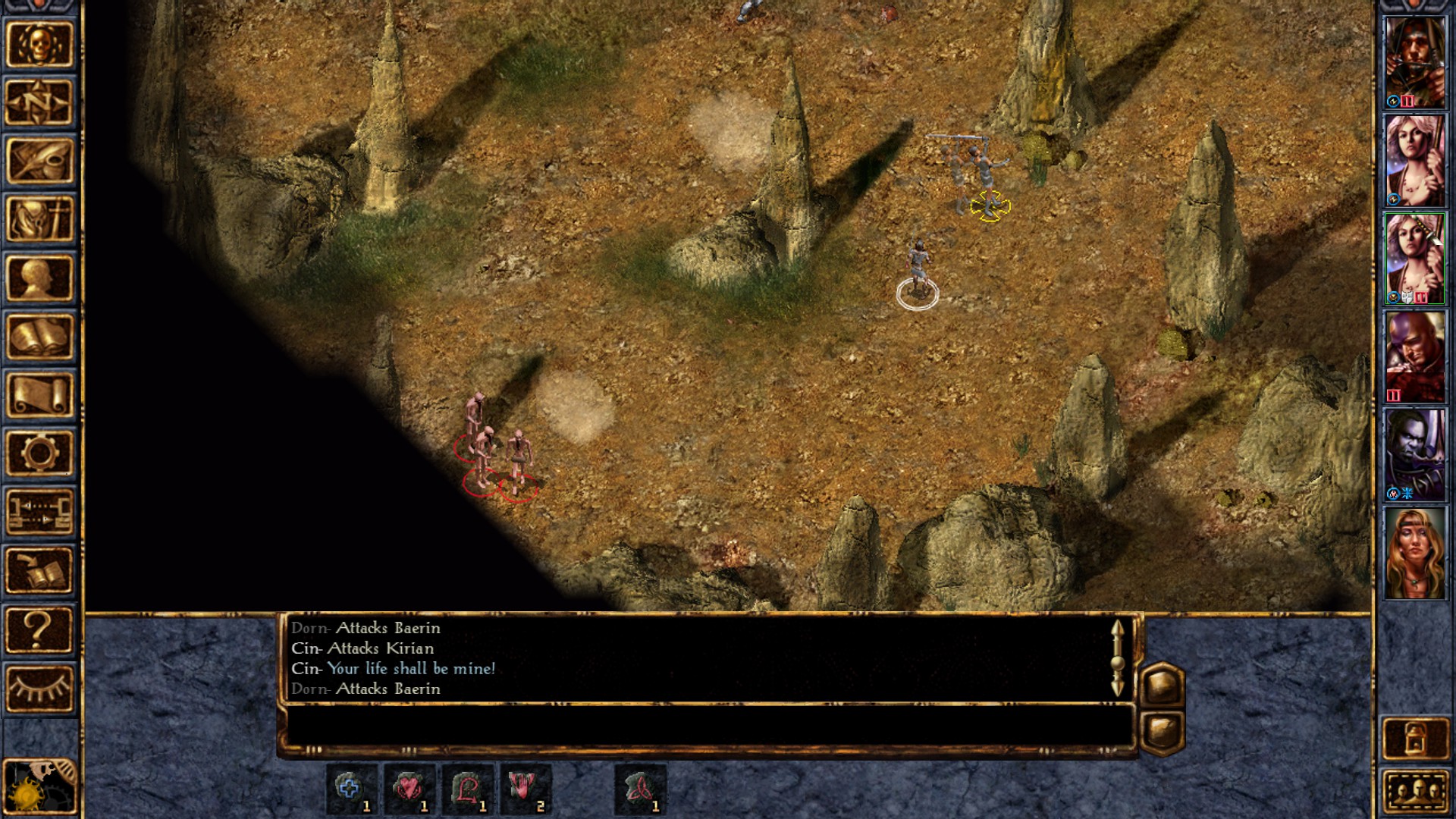 The Thing had multiplied.

My friend was now sure it was a horror haunting him for his past crimes, and he had started to whimper at the sighting of the things. But it got worse. Oh, so much Worse.

It didn't stop at three. Or nine. Or twentyseven. No, Soon they were everywhere. Out in the wilderness, in bandit dens, in the sewers, buried in tombs... it didn't matter. They were always there. Hiding in corners. Always watching.

Sometimes we woke up after resting to find them standing in a cluster around our party, staring at us, before dispersing. Sometimes we found hidden pockets of them in shadowy areas of the map. It was an infestation.

At this point the party's thief became a gibbering wreck at each encounter, and admittedly I was beginning to break aswell. It was simply too much. The emotional pressure, minsc dissaproving stare at my hands itching to throw fireballs all over the place. 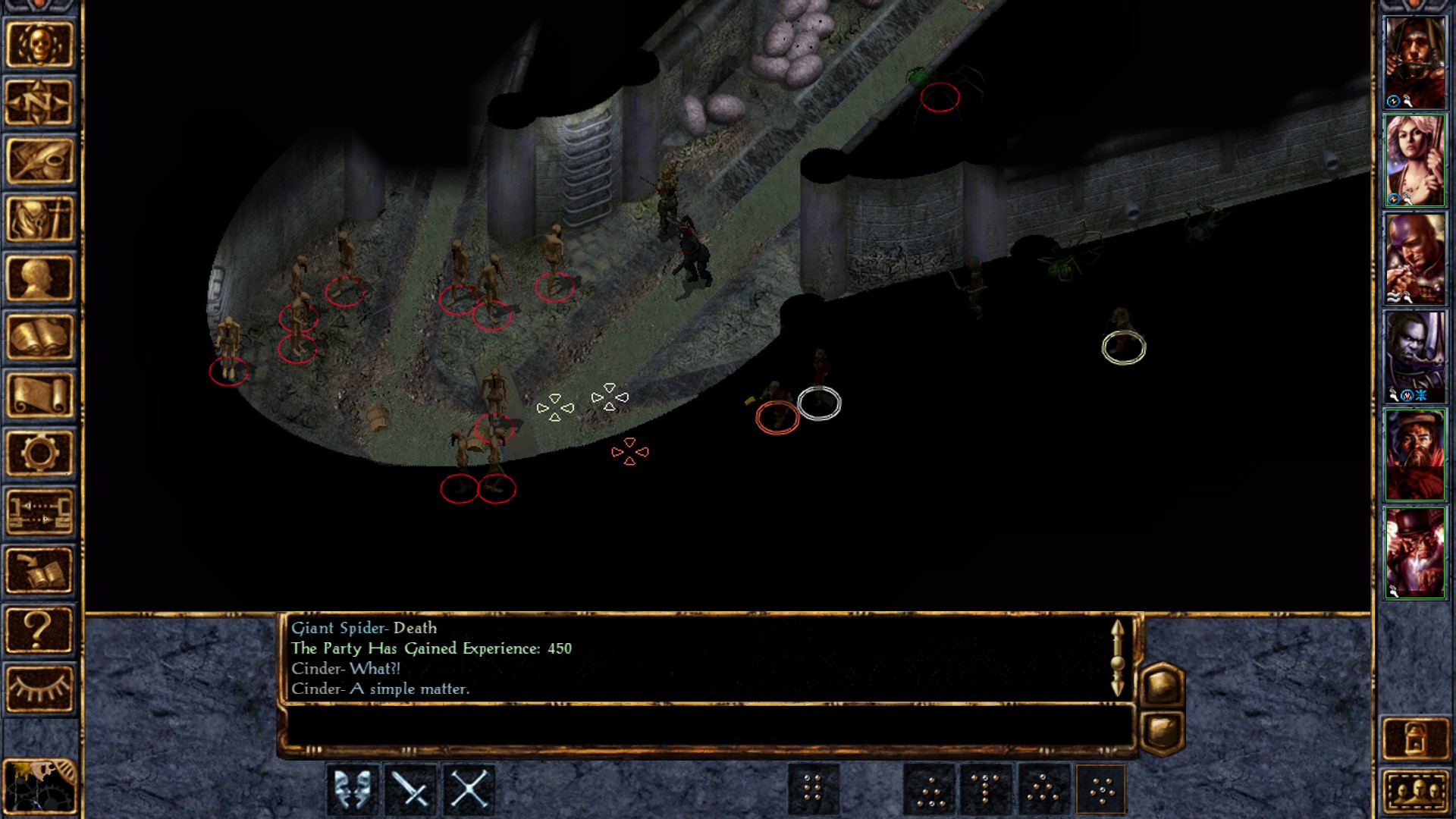 My friend became numb to the horror, As I myself slowly descended into madness. Only dejectedly nodding in agreement as I burst out crying when rounding a corner to find them waiting.


Then it went from a horrifying nightmare.... and turned into Living Hell. 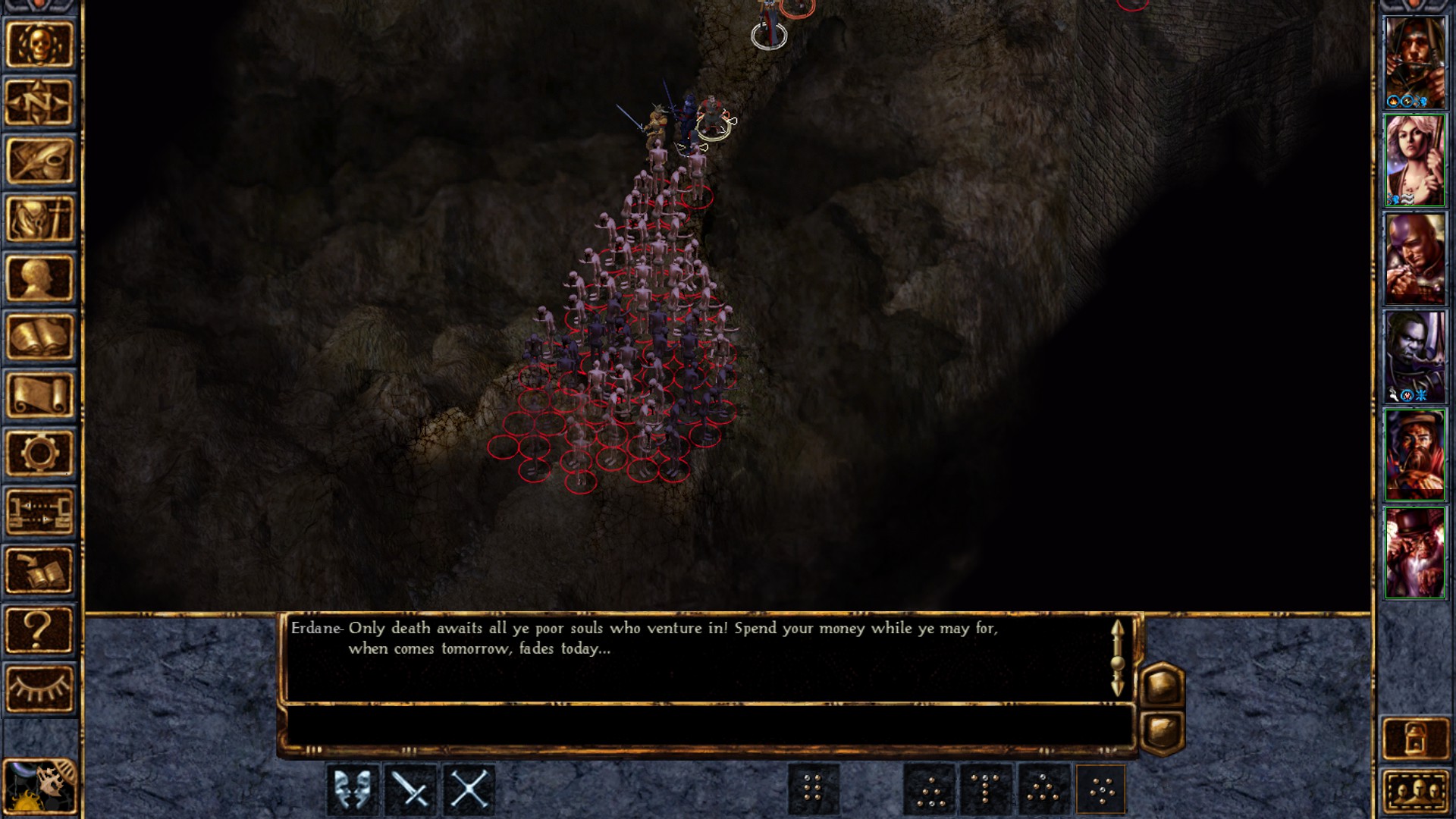 The way was shut. No way through.

With a banshee wail of frustration and insanity, my character snaps and she electrocutes Minsc on the spot, before commencing the tossing fireballs and exploding skulls at every figure in sight wearing loincloth. Thief joins in wearing a grim smile, dealing vengeance with gusto.

The Horde descends upon us.

The gnomes die in the chaos. Dorn tries to hold them off, but without Minsc to cover his back he gets surrounded, and eventually succumbs to the stackup of 1 damage hits. I incinerate and electrocute and whatever else that deals immediate and satisfying DEATH to the deamonspawn. They keep coming. Eventually I run out of spells. I'm swarmed.