Astafas Member Posts: 448
November 2013 in General Discussion (Spoiler Warning!)
For BG2EE I wanted a totally new character. This is what I ended up with, after far to many hours in Photoshop (photo on me to the right, should anyone be insecure which is which): :-D 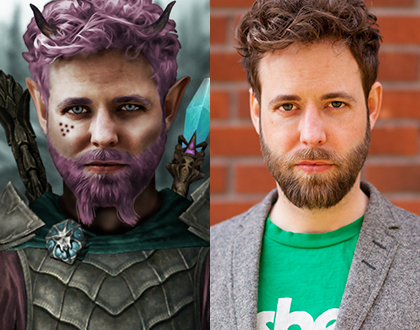 Now to my questions:

1. Should I play the tiefling as a Human, with the possibility to Dual, or as a Half-Elf with the Multiclass options? Haer'dalis really gives no answer, as he's a Bard. Reading on the Forgotten Realms wiki, I tend to lean towards the Human/Dual choice.

2. Do Tieflings get any racial benefits or disadvantages?

Finally, feel free to suggest cool classes and combos. I made the portrait as "neutral" as possible. The Sword on his back could just as well be a large knife, the Staff a Wand of Magic Missile usable by several classes and so forth. His name will be Astafas though, as my old forum name has a certain infernal smell of sulphur to it. :-D
0 · Share on Google+ Share on TwitterShare on Facebook