Rewolf Member Posts: 102
March 2014 in Challenges and Playthroughs
As some of you might have read on the forums, I have been playing Baldur's gate for over 14 years now, but I've never been able to finish the game, let alone start Baldur's Gate 2. In hopes of actually finishing the game I thought it would be nice to create a Roleplaying playthrough for everyone to follow. This way I would have some encouragement (If I write well enough!) to play on and hopefully finish the game.
The rules I use for myself is as follows:
- I try to roleplay the game and this journal as much as possible. This means sleeping at normal times ingame if possible and trying to pick dialogue options which are fitting for my character.
- I will only reload on the death of CHARNAME, not on the death of Party members. If that happens I will just have to see how I can reform my party.

The Saga follows a man named Saul Loken, who grew up as an orphan in Candlekeep. Saul was tutored by the sage Gorion and grew up to be a fine man of principles.

Saul had always wanted to become a monk after some of the had visited Candlekeep in his past. However, Gorion withheld him from this path, claiming that another path was destined for him, not one spend in a monastery. Besides that, he claimed that Saul didn't possess the amount of psionic energy needed to become trained into a monk. Disappointed, Saul took it on himself to become as skilled and closest to the elegance, nimbleness and agility of a monk.
He followed the way of Lothander in fighting for Good and pursuing those who profit from actively doing Evil deeds. He believes that in the world there should be a balance of power between Good and Evil. Following the stories he had heard and read, the conclusion was clear. With great power there always came great costs and losses, whether it was power in the hands of a God, realm or man in the name of Good or Evil. Saul thinks that neither Good or Evil would be good to hold absolute Power as it would either corrupt or destroy itself or be the destroyed by the opposite side. He himself does however support Good and actively tries to tip the scale of balance in favor of Good, whether he has to break the law for it or not. He does not actively fights Evil persons, because as long as they don't do anything Evil, they don't have to be fought or destroyed. they have as much right to exists in such a case as someone who isn't Evil as well and doesn't do anything Evil just as well.
As weapon of choice, he chose to fight with the Quarterstaff. Not wanting to maim his enemies, but only to let them learn from the bruises and broken bones he would deliver (though he still had to actually get into a fight for the first time of his life). Plus, with a Quarterstaff it didn't matter with what part you hit someone, as long as you hit right it always hurt. The greater agility and reach he had from fighting with this weapon as well as fighting unarmored was something Saul savored and thrived upon, being able to use greater dexterity and his wits to outsmart and manoeuvre any opponent. 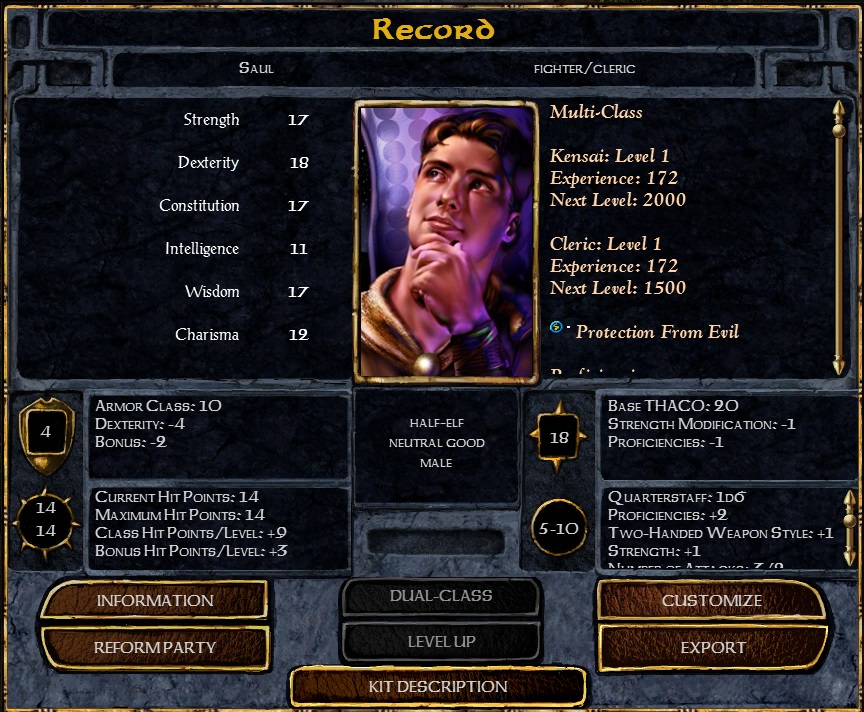