The Journeys of Theodoric: Hero of the Sword Coast (Solo Cavalier Playthrough BG1Complete. On Break)

Elrandir Member Posts: 1,585
March 2014 edited June 2014 in Challenges and Playthroughs
Yes, I am starting another solo playthrough alongside my solo archer. However, this won't be the same as my other playthrough, since I'll be giving a very basic "This is what happened" sort of recap. I won't be doing a role-play story based playthrough with Theodoric (The cavalier) like I did with Roisin, my archer.

The idea behind this character is that he is a traditional heroic knight, who will always strive to do the right thing, and be the hero. He won't journey with anyone because he doesn't wish them to come to any harm while traveling with him. There will be one minor exception to this rule, but it is minor. I will, however, accept people's aid to begin with, and then leave them behind, just so they stay in the game. Occasionally I may use them for their services, e.g. Garrick being used to identify things ect. ect. In BG2 I may take people and complete their questline, but I won't be using them after that. Also, a fun fact about the character's name? It's an altered form of my own. My name is Theodore, and I simply changed the name to sound more medieval and knightly. I certainly don't think I'm a paladin, but I wanted a knightly sounding name, so I just went with that. The name (Theodoric, not Theodore) means "ruler of the people", and while it doesn't exactly mean anything terribly knightly, it sounds good.

I've already played a bit with the character, and he's level 4 now. I'll post another picture later showing his progress, but for now you can just see the basic lvl 1 image from Candlekeep. 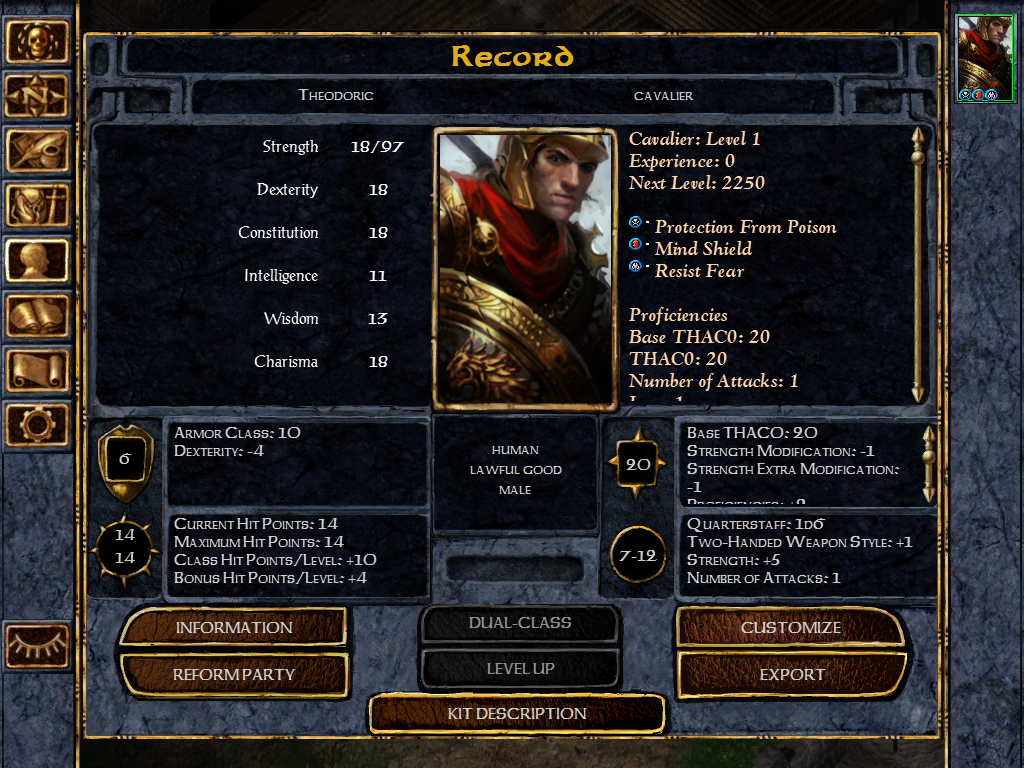 If you wish to provide tips or ideas for how to deal with a certain challenging fight or what gear I should use, you can go to this thread, http://forum.baldursgate.com/discussion/31066/tips-for-a-solo-cavalier/p1 , which I made a few days ago. I doubt anyone who sees this won't have seen that one, but on the off chance you missed it, there it is. This thread is (ideally) reserved for conversations about the journey itself, and (obviously) the recap. I'll go ahead and do a recap of his journeys so far. (Spoilered for size convenience) If I leave something out, it's because I played last night, so I'm writing this from memory\the journal's completed quest log.


Chapter 1: The Adventure Begins
Theodoric did all the quests in Candlekeep, but did not fight Shank or Carbos, since he had no reason to enter those buildings. He purchased splint mail and a greatsword, and also had the enchanted dagger from Fuller. He set out from Candlekeep and you all know the next bit. In the morning Imoen joined him and he decided to take her to Beregost so she'd be safe. He traveled east from the starting area and picked up a ring of protection, which he promptly equipped. He then traveled south to Beregost, and dropped Imoen off near the middle of town. He then went into Feldpost's inn and peacefully solved the dispute between a local and himself, earning 900 xp. He then traveled around town a little, finding most of the important places before giving a book to Firebead and getting the scroll case along with some experience. He then dealt with a dwarf mercenary sent to kill him in one of the inns. He then traveled south, killed two ogrillons, gaining the scroll for Mirianne. Traveling further south he found three flaming fist mercenaries who he failed to convince of his lawfulness. He would not let them arrest him, however, since he had done nothing wrong, so they fell to his blade. He looted a nice new helmet, and some shiny plate armor, along with the rest of their gear which he took back to Beregost to sell. He gave Mirianne the letter, gaining another ring of protection which he would sell, and then sold his gear to the smithy. He then traveled north to the Friendly Arm Inn, found the ring of Evermemory, killed Tranzig, spoke with Dorn briefly, then went upstairs and talked to Landrin about her house and the spiders. Landrin also gave him six antidotes, which he would sell when he got the chance. Theodoric then spoke with Joia, and went to get her ring, which he quickly returned. He then went south, past the South Beregost Road and found a necklace on some dead bodies, which he would soon return. He traveled east, found and slew some half-ogres, gained an enchanted greatsword, and also searched a nearby cave, killing an ettercap and gaining some mild valuables. He then went back to Beregost, gave the necklace to the father of the dead child he had found the necklace on, and then dealt with Garrick and Silke, leaving Garrick next to the Red Sheaf for when he needed an identifier. He also dealt with Neera, saving her, and then proceeding to take her gem bag and ditch her. (Look it was payment, ok? He’s still a nice guy) He then killed the spiders at Landrin’s and brought the things she had asked for back to to her. On the way to the FAI, he killed the belt ogre and got both belts, though he's going to sell the cursed one. He's now at the Jovial Juggler and is level 4.
Post edited by Elrandir on June 2014