A Narrative of the Life and Adventures of Aya, Avenger Druid of Candlekeep 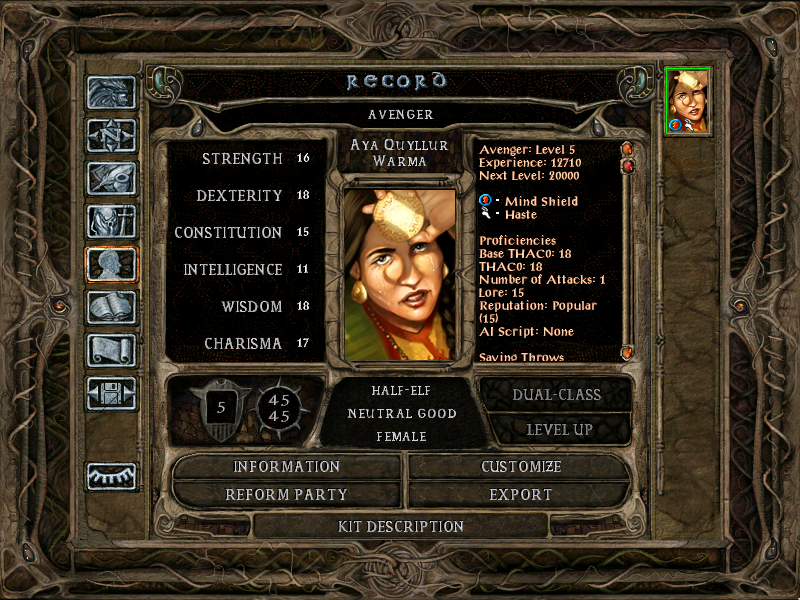 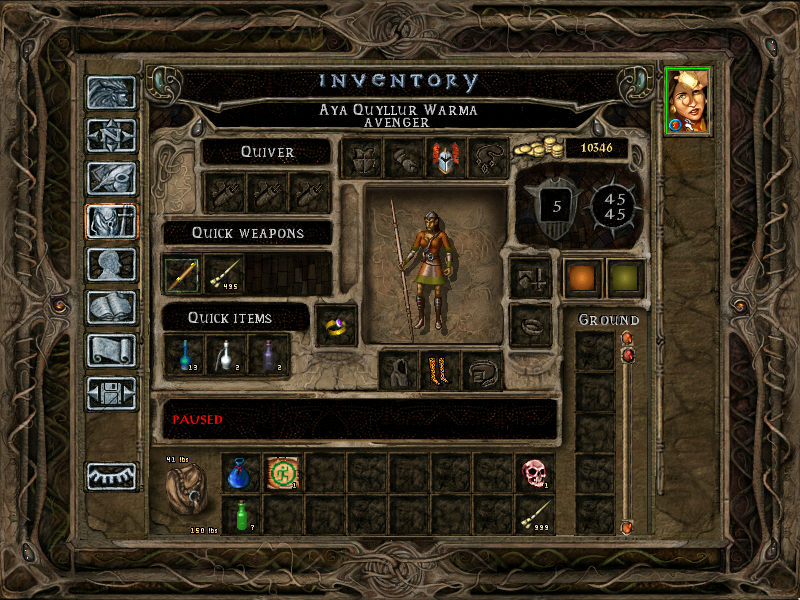 These screenshots were taken just yet. When I started playing her yesterday, I didn't think of taking any level 1 screenshots. Didn't even know whether I would enjoy her enough to continue to play her

Aya is the daughter of a half-elven shamanic priestess from Maztica, who had come across the Trackless Sea to Faerun after her community was foretold of the Time of Troubles in a collective vision. As a healer/protector Aya's mother had been gifted by Mother Nature, and she considered it her responsibility to lend her hand to those who needed it the most. She met with Gorion (and other harpers) on the Sword Coast, and when it turned out their interests in doing good were mutual, they became friends. Unfortunately, Aya learned from Gorion, Aya's mother wouldn't live to see the Time of Troubles through, as she died while giving birth to Aya. Gorion has never told Aya much of her mother other than that she was a good woman and that Aya's surname Quyllur Warma means child of the stars, as she was born during a starry night in the High Forest, while she and Gorion were on their way to Silverymoon to visit some of Gorion's elven Harper friends. Aya wonders whether Gorion has told her everything he knows. (Actually Quyllur and Warma are the Quechuan words for 'stars' and 'child'. Quechua is a language spoken by indigenous peoples in the Andes.)

In Candlekeep Aya never received any type of education to become a druid, and she never even aspired to be a druid, but growing up, she discovered a strong, innate affinity with nature. She has a telepathic understanding with plants and trees which at first frightened and embarrassed her, but over the course of time she's learned to embrace this quality. Also, at a young age she discovered her ability to heal other people and animals. All it takes is to lay her hands upon a wounded creature. She spent most of her time with the Oghman priest in the infirmary, and exchanging stories with Imoen, her best friend.

Aya is of Neutral Good alignment. She's kind but somewhat aloof. On the one hand, she's good-looking, attractive in an exotic way, and pleasant with other people, causing them to enjoy her company. But on the other hand she's not the most sociable person, as she'd often prefer silence and meditation where others in her situation would share an ale or a tale with a friend or a stranger. Either way anyone in need of her help can count on her, even if she'd rather be doing something else.

- No-reload
- SCS/Ascension
- Core difficulty, with max hitpoints for all creatures in the game
- Not sure yet whether this is going to (remain to) be a solo venture. I might want to try out the Xan romance, and Kivan, Coran and possible Faldorn would also be interesting companions.

I patiently re-rolled to get some great stats to boost her survivability. I would have liked her to have slightly higher INT, but that's her only dump stat really (next to STR, which I maxed mainly for weight allowance issues since I can't see Aya meelee'ing much).

This journal isn't going to be as extended as other journals I've written on here, though truly interesting battles and roleplay aspects will still get detailed attention.

In Candlekeep Aya did all the possible chores except killing the rats in the storehouse for Reevor, whom she didn't speak with. She even killed two bounty hunters who had wanted her dead, in melee combat. She took two hits but she was more damaging with her staff. A 12 damage critical was sufficient to kill Carbos in one hit.

The day after Gorion's decease, she was joined by Imoen and later Xzar and Monty. They picked up any loot to be found near Gorion's remains and returned to Candlekeep to arrange for Gorion's burial. There she parted with Imoen, insisting she wouldn't have her involved in the mess she was in. She also said goodbye to Xzar and Montaron, who unlike Aya, were in a hurry to get to Nashkel.

She travelled south to the High Hedge Area to take a shortcut to Beregost. In the HH area she encountered many foes, of which the skeletons with their throwing daggers were the most dangerous. Aya had decided to wear no armor, as the only armor she was allowed to use as an Avenger was leather armor which is counterproductive in protecting the wearer against missile attacks. One skeleton had her quaff two healing potions before it went down. She fled from the other undead, southward, until she faced a zombie and a wolf (thankfully not simultaneously). In killing the wolf she turned out to have saved Melicamp the chickenated apprentice from certain death. Aya travelled with Melicamp back to the HH area, to Thalantyr who restored Melicamp to his human form, helping Aya to level 2. She then travelled to Beregost where various peacefully resolved quests (Marl, Dudley family, Firebead) and the killing of four huge spiders rose Aya to level 3. From that moment the Web spell became available to her, making her much more dangerous in battle than she'd been before, and much more confident travelling to ther places. Web helped her kill two Ogrillons south of Beregost for example, Neira in Nashkel, a rogue Ogre who had stolen Unshey's belt, and Tarnesh at the Friendly Arm Inn. Aya would cast web and slay her foes with Chromatic Orbs and missile attacks (darts). 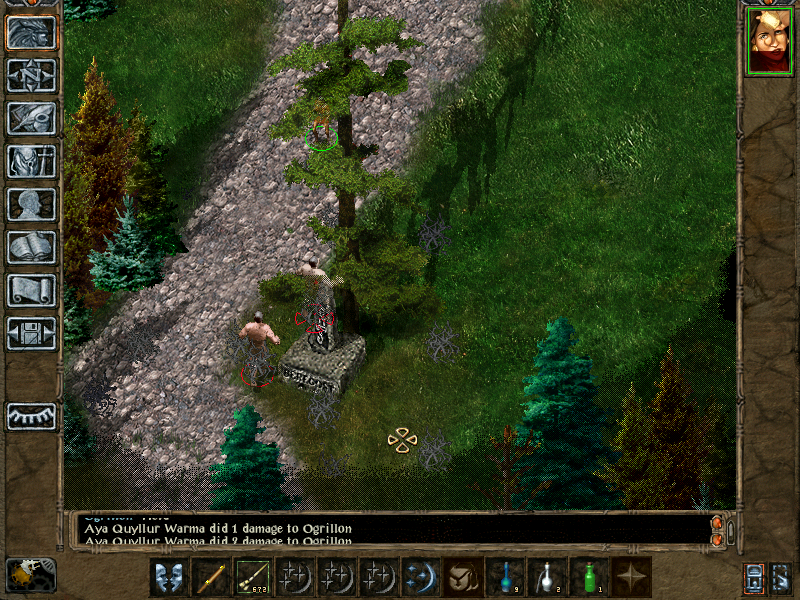 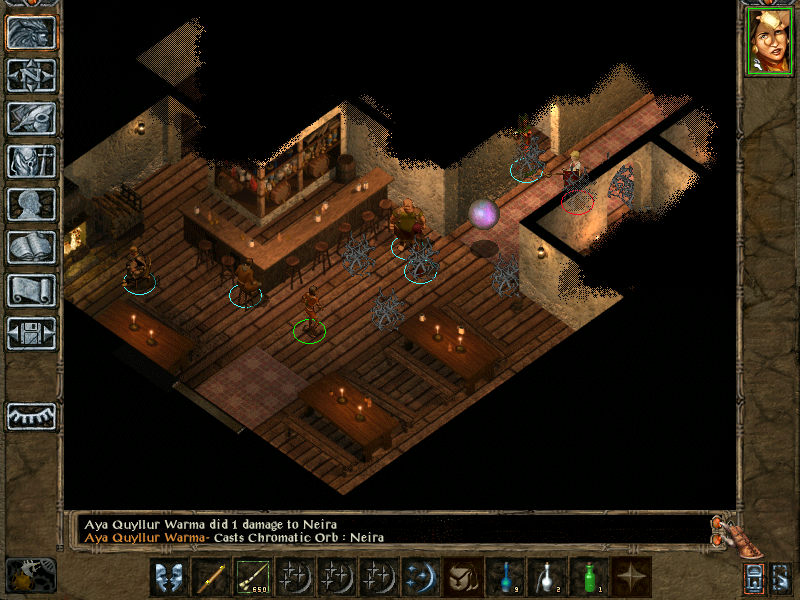 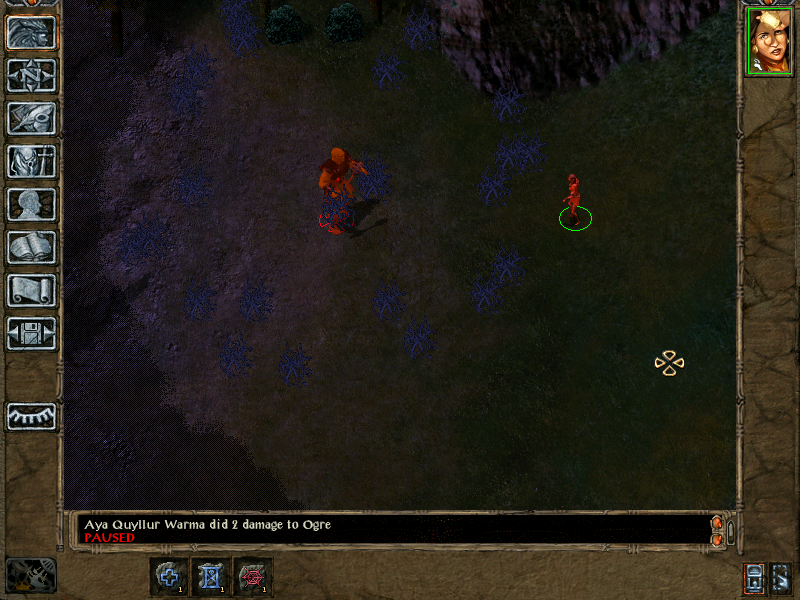 She had more difficulty with Karlat, who quaffed an oil of speed before he attacked her. She had to flee, and when the potion's effect had worn off she fought him with darts and Chromatic Orbs since casting Web inside the Red Sheaf would be very dangerous for her so long as she didn't enjoy Free Action. One of the Orbs blinded Karlat which made it significantly easier for Aya to finish him off with her darts.
Another dangerous foe was Zordral, at the Nashkel Carnival. He had a number of Charms she could only protect herself against by fleeing inside one of the tents. He also hurt her with Magic Missiles and successfully cast Blindness on her. It was only after he'd ran out of all his spells, that a still blinded Aya managed to finish him off in melee combat, with a critical hit. 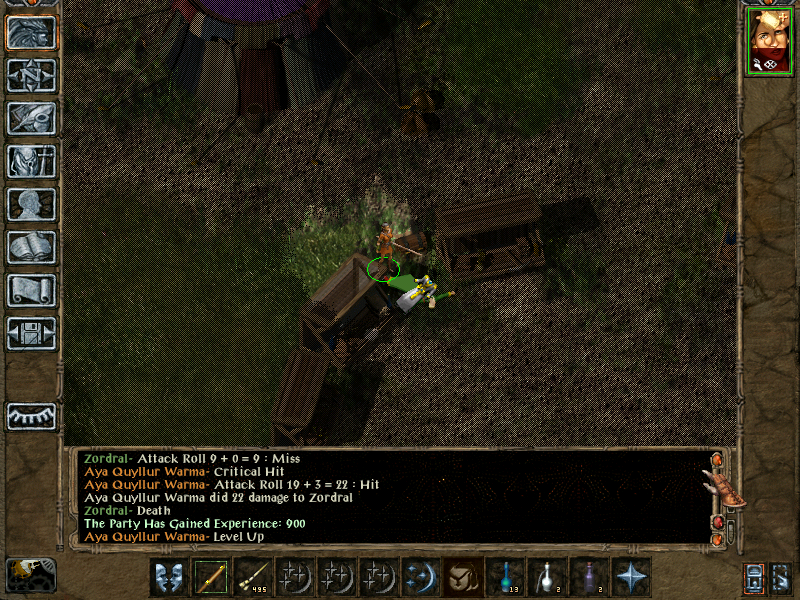 Aya is now a level 5 Avenger. She's still without armour (apparently in my setup Avengers can't use Ankheg Plate Mail) and she uses mundane weapons for lack of anything better. She does own a Helmet of Charm protection, a purchase she did after haveing dealt with Zordral the Enchanter, a Ring of Protection +1 she received from Mirianne, and the Stylish boots of the Cheetah.