lolien Member, Moderator, Translator (NDA) Posts: 3,107
June 2014 in Challenges and Playthroughs
The original idea of this playthrogh comes from the sorcerer no equipment challenge. I wondered: is there an other class, what is owerpowered enough, to beat the game alone and with no equipment? I never did or tried the challenge with the sorcerer, but i imagine, that its strongness are the powerful spells and the automatic spell learning by level ups.

The mage classes are not good, because they use scrolls to learn spells. From the warriors maybe the monk can achieve this, it need not to use other weapon than its fist, but by the start it can be hard without missile item, and at the end of the game there will be enemies immune to +3 and less weapons.
My first thought was a ranger/cleric dual or multi class. It gets the cleric and the druid spells, and can be a good fighter too. I don't abandone this idea, but when i start to work out this character i have an other challenging idea for it, and the character needs heavy role playing, so it must wait for the present.
The second thought was the cleric/thief multiclass. It gets spells automatically too, however just the cleric spells. But it gets the thief's cheese advantages too.
I don't know, that is it possible to beat the game this way, but i give it a try. It will be fun anyway!
My personal rules:

- Solo. It could be a little boring for me, but the challenge require it. For role playing maybe i let some
npc-s join, but i won't travel with them to another area, and won't use their abilities in fight or other
way.
- Minimal reload. I go for no reload, but i never played no reload before, so i remain realistic with this.
However if there will be too many reloads i will not continue, i must admit defeat somewhere.
_ No equipment. This means that the character can't use any item directly. Can pick up items, but they must
remain in the backpack. I exclude items that are essential for the storyline to continue, if there are
any.
- BGEE without any mods on core rules.
- I will rolplay this run, but the challenge rules go first.
- I will use any official cheat, that i know and can (eg. spike trap: yes, fake talk: no).

Updates can be rare, becouse i have limited time to play, and with my poor english knowledge it takes ages to write these walls of text. But i strive for doing this, please feel free to correct my mistakes!

And now, i proudly present: 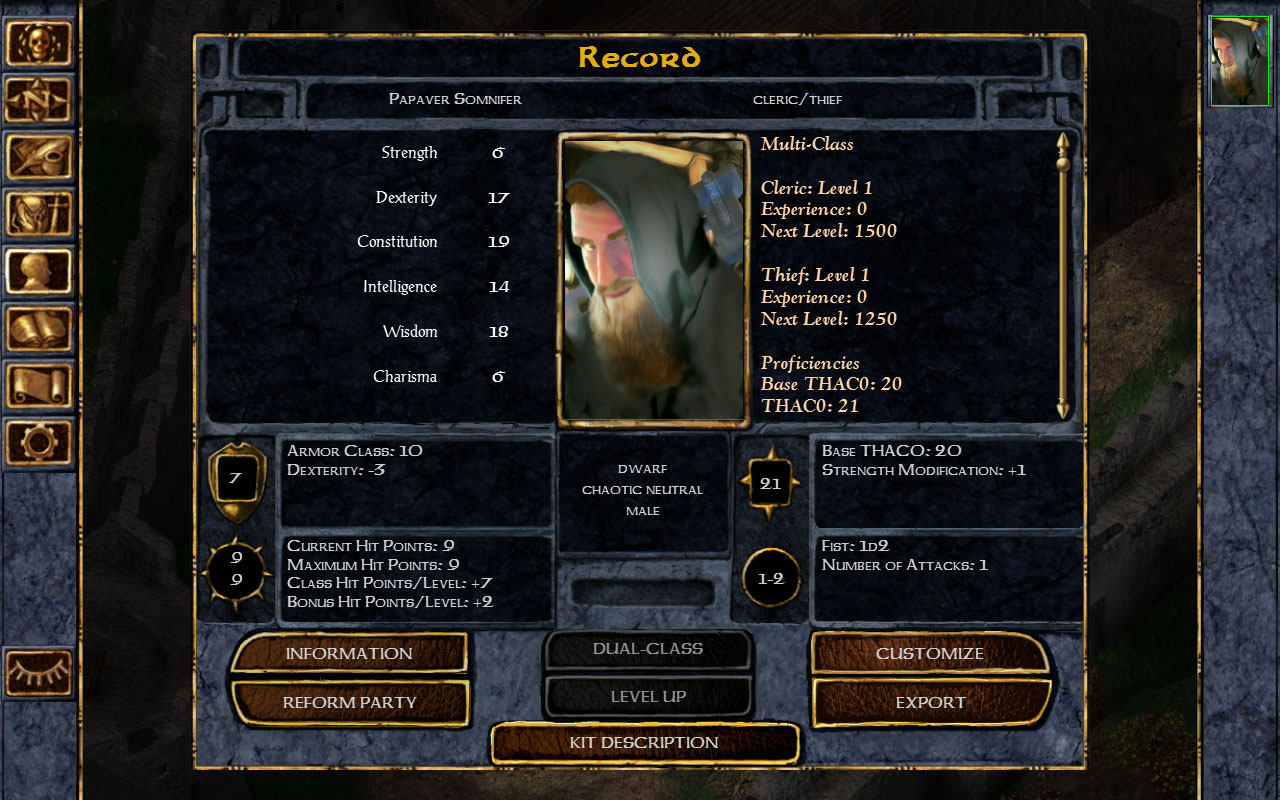 Papaver is a real tradesman, he prefer wealth and gold above all. However, bargaining is not his strong point, thanks to his slightly sociopathic personality.
He sees the true value of a great weapon, but won't use it in combat, because he don't like face to face fight, and don't like to decrease the weapon's value by using it. He likes trading, but won't seclude himself from getting money or wealth with any fishy way, if the oppurtunity comes. Will he kill someone for wealth? That depends on the circumstances.And maybe on his mood...
He don't like fighting. Not for moral reason; he has a very short stature and small strenght, and his eating habits, that caused him a "little" overweight, don't help too. He prefer to beat his enemies with cunning and trickery, and despite of his weakness and overweight he is very agile, and has a quick finger for locks, traps and pockets. And for cooking! He likes eating, likes to cook and bake, to experiment new recipes, to discover new flavours.