[v1.3] Bardic Wonders, a kit and item pack for bards

This mod adds new bard kits with specialized bard songs to the game, as well as a new merchant to Baldur's Gate II who carries new bardic items.

These components can be installed in either BG:EE or BG2:EE.

ABETTOR OF MASK: Contrary to popular belief, the trickster god Mask's favor extends past those who walk the path of stealthy arts and trickery. The Abettor is a faithful Maskarran, a deceptive agent of the Lord of Shadows whose gall is tested through tasks that typical bards would balk at due to their dark natures.

SHADOWSTEP: The character steps into the Shadow Plane and may move for 7 seconds while others are frozen in time. The caster cannot attack or cast spells while in the Shadow Plane.

DISADVANTAGES:
– Must be of True Neutral, Chaotic Neutral, Neutral Evil or Chaotic Evil alignment.
– Only has one-half normal Lore value.
– May not learn the Magic Flute high level ability.
– May only be proficient in weapons usable by thieves.

DANCER: The dancer is an entertainer, an acrobat and a surprisingly dangerous combatant when drawn to battle, emphasizing speed and agility to confuse and unnerve his opponents while inspiring allies to fight with increased confidence.

– From 4th level onwards, may use the Adrenaline Rush ability once per day.

ADRENALINE RUSH: The dancer temporarily gains a huge boost in power for three rounds, gaining +1 to hit and damage for every four levels. Attacks per round are also doubled. However, their Armor Class is reduced by four points and they are unable to use their Bard Song, and after the duration ends, they become winded, suffering a huge penalty to fatigue and inability to use their Bard Song for one turn. From 18th level onwards, the dancer is no longer fatigued after the effect expires.

DISADVANTAGES:
– May not wear any armor.
– May memorize one less spell per level.
– Only has one-half normal Lore value.

STORM DRUMMER: Storm Drummers are particularly powerful bards whose music has the power to summon lightning storms. Their drums and booming voices, loud as thunder, can unnerve both enemies and allies alike. However, their unique abilities have led them to shun metal weapons and armor in order to optimize their abilities.

Due to the song's magical nature, it can be used indoors.

– From 5th level onwards, may use the Storm Shield ability once per day. Extra uses are gained at 10th and 15th level.

STORM SHIELD: This spell lasts 1 round per level of the caster. It protects the caster completely from lightning, fire, cold, and normal missiles.

– From 10th level onwards, may use the Thunderclap ability once per day.

THUNDERCLAP: The Storm Drummer claps their hands together, causing a deafeningly loud blast of sound. All creatures around the Storm Drummer must save vs. spells at -4 or be stunned for one turn. Even if the save is made successfully, all targets are deafened, suffering a 50% chance to miscast any spells. Only the caster is immune to the spell's effects.

TROUBADOUR: Troubadours are musicians that specialize in lyric poetry. Their songs are often of chivalry and courtly love. In adventuring, troubadour bards are valuable due to their proficiency in healing spells, including songs of rejuvenation that protect their comrades. Women that choose the profession of the troubadour are usually known as trobairitz.

Advantages:
– May cast spells while wearing armor.
– The troubadour's Bard Song, "Song of Healing", gradually heals their allies and provides them with resistance to any attempts to impair their movement, magical or otherwise.

– Gains the following priest spells in their spellbook:

– 10th level: May use the Voice of Peace ability once per day.

VOICE OF PEACE: Chanting a soft melody, the troubadour soothes their allies' spirits and renews their confidence, healing them for 1d6 (+1 per level) hit points. All allies affected also gain 10% physical resistance and immunity to berserk effects for 1 turn. However, allied barbarians and berserkers will find themselves unable to call upon their rage while the aura of calm is in effect.

– 14th level: May use the Sacred Breath ability once per day.

Disadvantages:
– May not wear armor heavier than studded leather.
– May only be proficient in weapons usable by thieves.
– Only has one-half Pick Pockets percentage.
– May only be of Neutral Good, Chaotic Good, True Neutral or Chaotic Neutral alignment.

DEATHSINGER: A morbid class of bards, deathsingers take pleasure in singing tales of the macabre, and their magical songs are capable of raising the dead from their graves.

Disadvantages:
– May not learn or cast any spells of the Illusion school.
– Receives a -15% penalty when scribing scrolls from other schools.
– May not be good-aligned.
– Only has one-quarter Pick Pockets percentage.

ABETTOR OF MASK: Symphony of the Dark Children
This song is a powerful aid to both the Abettor and to his allies. In addition to all existing effects, the song now provides +50% to all thieving skills, +6 to Luck, +4 to Armor Class (+8 vs. missile weapons) with an additional +2 vs. good-aligned creatures, +4 to all saving throws, immunity to backstab and a 20% chance for all party members to turn invisible for two rounds. The Abettor also has a 5% chance to stop time for one round, but he is unable to take any action for the duration.

DANCER: Swift-As-Flowing-Water
This oriental dance is a powerful aid to both the Dancer and to his allies. The song gives the Dancer a +20 bonus to Armor Class as well as the ability to move at a reduced pace. The song also gives his allies +8 to hit and damage as well as one extra attack per round and increased movement rate. There is also a 5% chance that the entire party will become affected with Adrenaline Rush.

TROUBADOUR: Holy Hymn of Eldath
This song is a powerful aid to both the Troubadour and to his allies. The Holy Hymn of Eldath causes all recipients to regenerate for five hit points per round and become immune to all movement-impairing and mind-affecting effects, poison, disease, level drain and instant death effects. The party also gains a +4 bonus to Armor Class and Saving Throws, with a +2 extra vs. evil creatures. There is also a 5% chance all recipients will be healed for 40% of their total hit points.

DEATHSINGER: Legion of the Dead
This macabre hymn allows the deathsinger to rouse the bones of the dead to fight on behalf. The deathsinger's song now always summons a 9 HD skeleton each round up to the maximum cap, and there is a 25% chance that a 15 HD skeleton will be summoned instead. Additionally, the deathsinger now gains a +10 bonus to Armor Class, a +6 bonus to all Saving Throws, +20% Magic Resistance and +50% Magic Damage Resistance while singing.

This component can only be installed in BG2:EE. It adds a dozen new items, mostly intended for bards although a couple can also be used by other classes.

All items can be bought at Trademeet from a new merchant, Leanne the bard. She can be found in Trademeet, within the blue tent outside of the city. Location here.

Additionally, the PC can purchase one of two legendary weapons only usable by bards for a very high price. In order for her to offer these weapons, the PC must have an 'extreme' reputation (i.e. 20 or 1 reputation). If the PC is a bard, Leanne will offer the weapons at a significant discount, albeit the end cost is still pricey.

NEW - Jester's Chain for Jesters: The Jester's Chain is massively disappointing for two major reasons. One, its intended users, jesters, can't wear it very well due to it disabling casting. Two, it's pretty garbage, especially for the number of tokens you need to give up to acquire it. This is a major error that must be fixed. The improved jester's chain no longer disables spellcasting and provides a jester with an armor class bonus vs. missile weapons. However, the armor may be unpredictable - the wearer has a small chance to cause a wild surge with any spell they cast while wearing the armor. Fortunately, jesters gain a slight edge by having the protection of a Chaos Shield.

Also, the armor is now significantly more colorful. No self-respecting jester would settle for less.

My apologies if the names come off as bland or generic. I am the award-winning giver of lame names

Want to be spoiled on the item descriptions? If you just want to see a few, don't worry, they're all individually spoiler-ed: 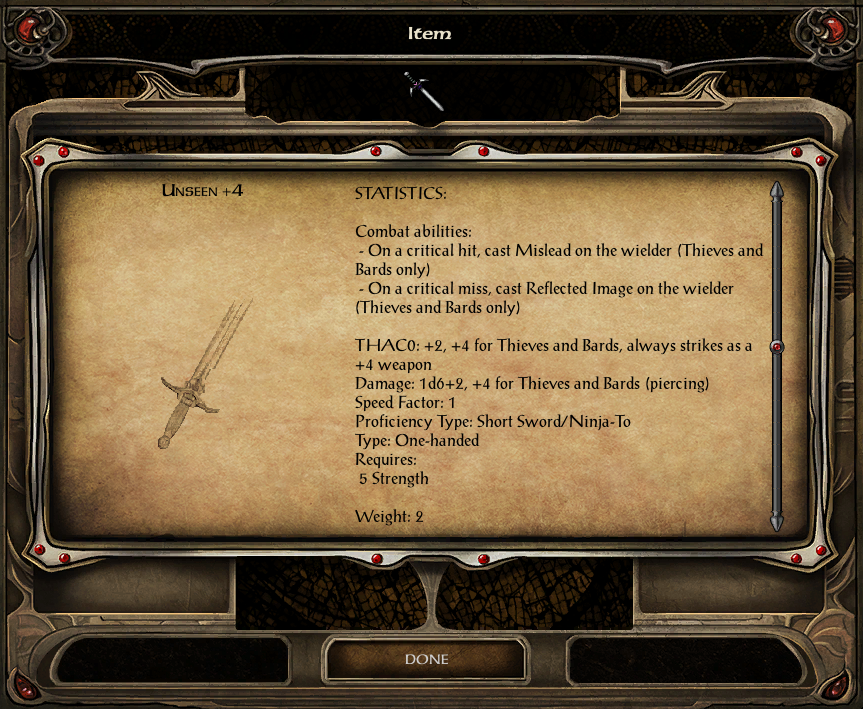 Armor of the Grey Fox +3 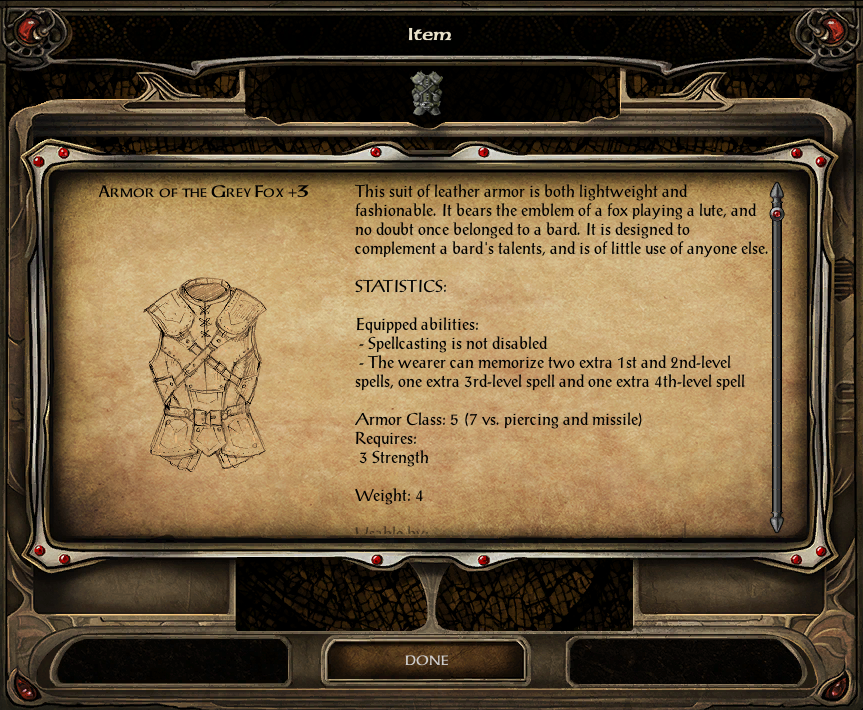 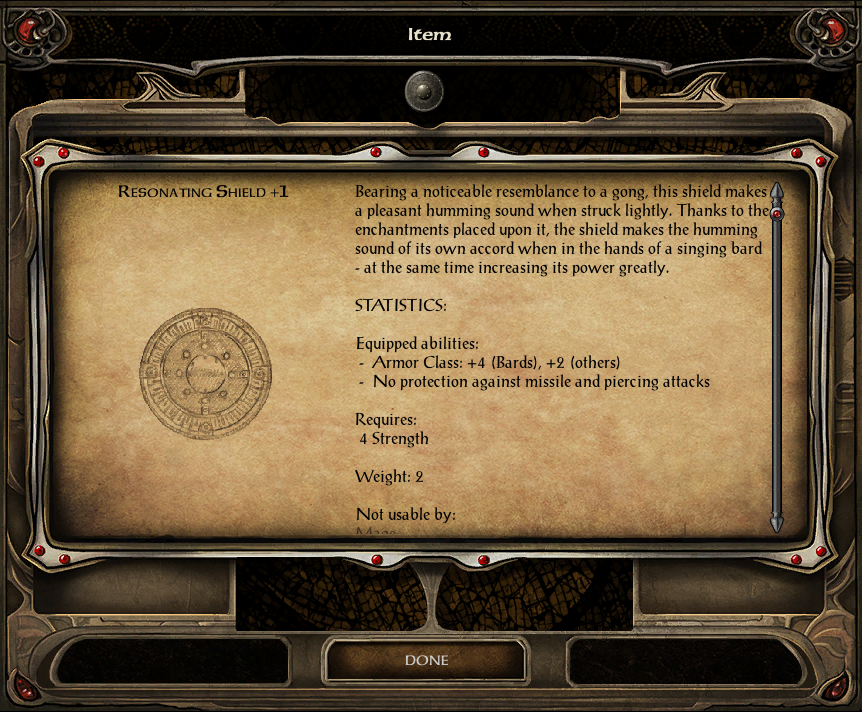 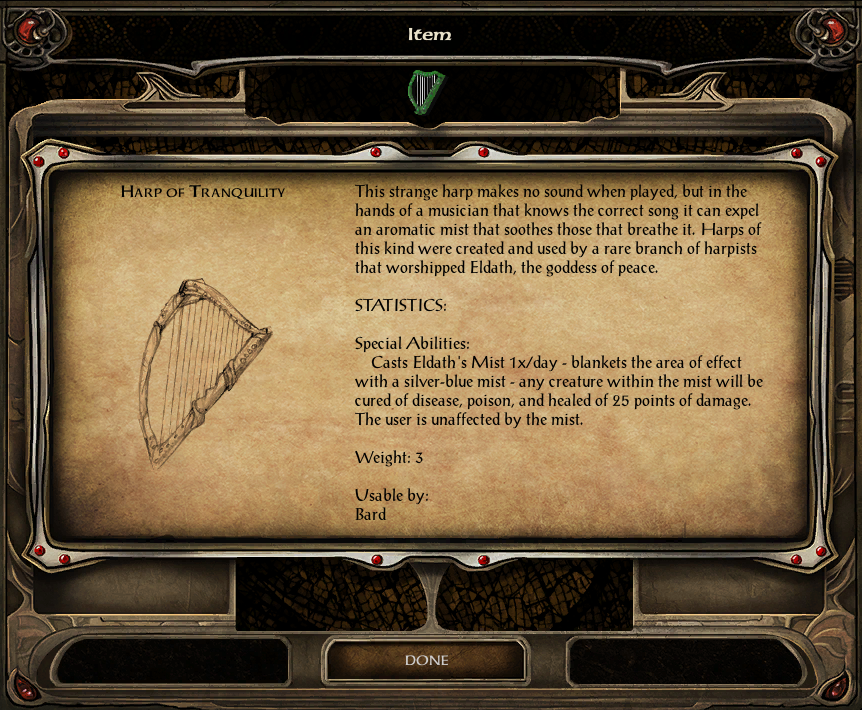 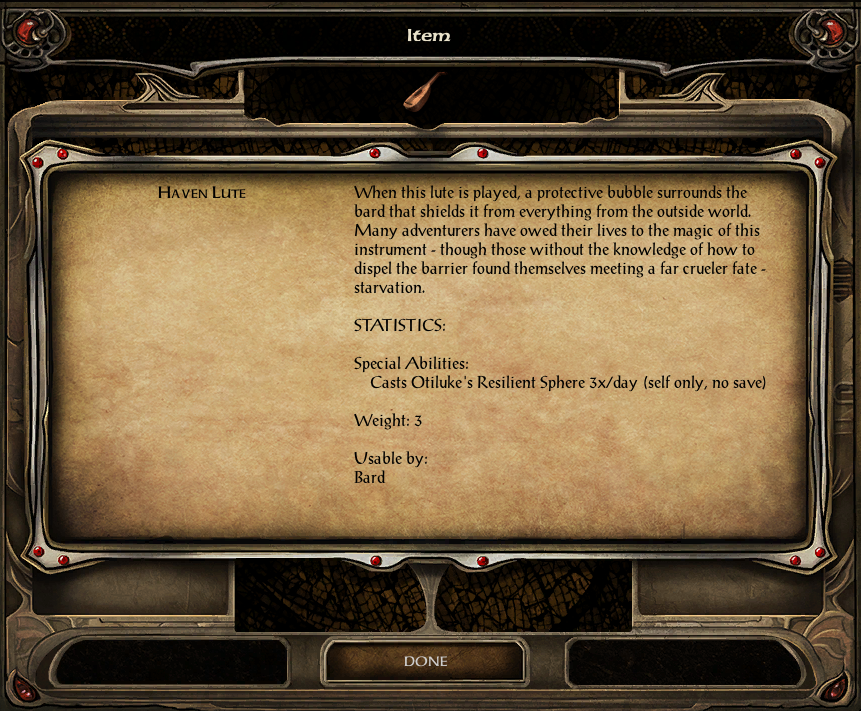 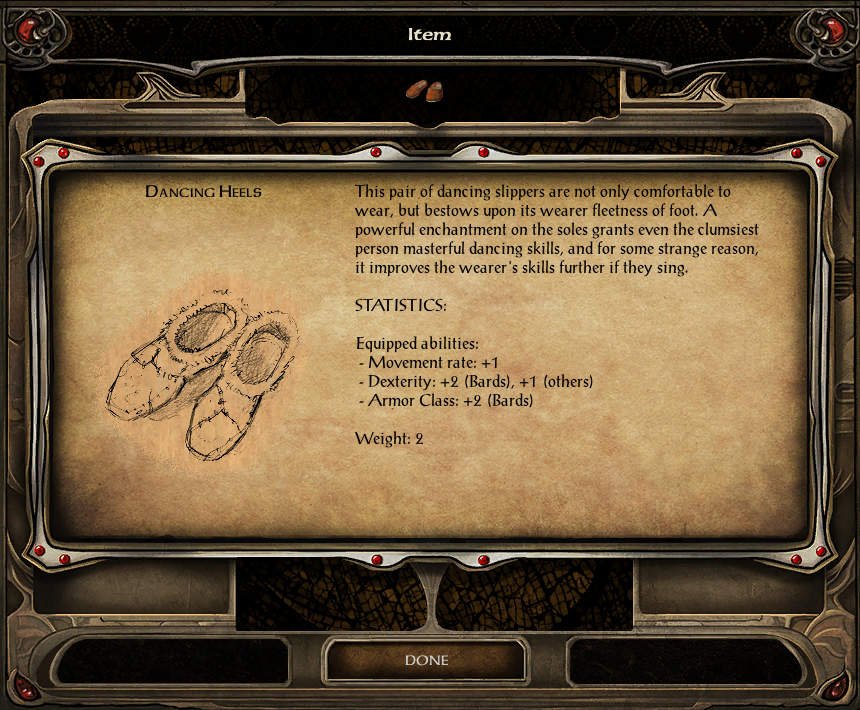 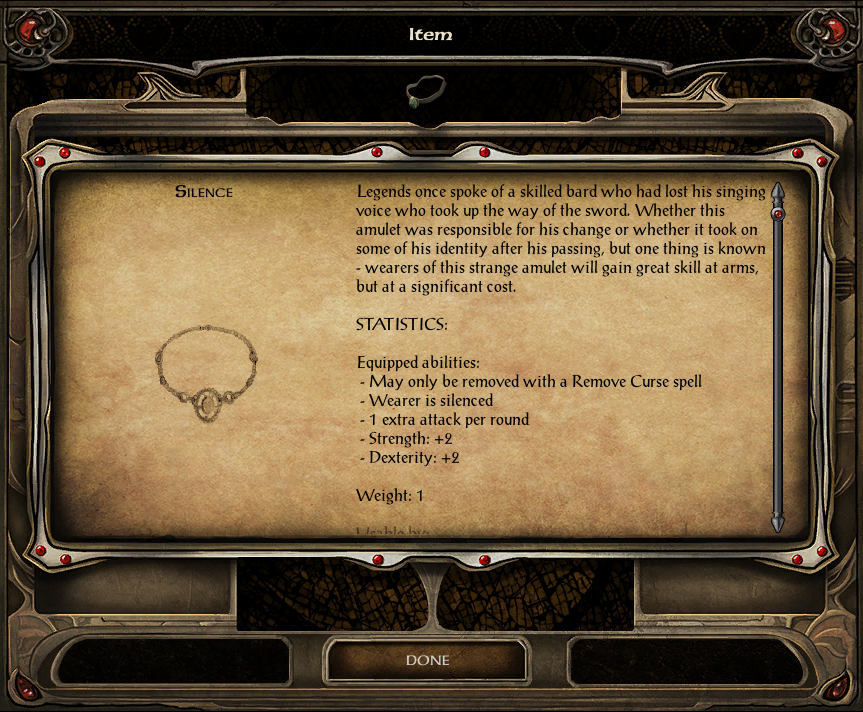 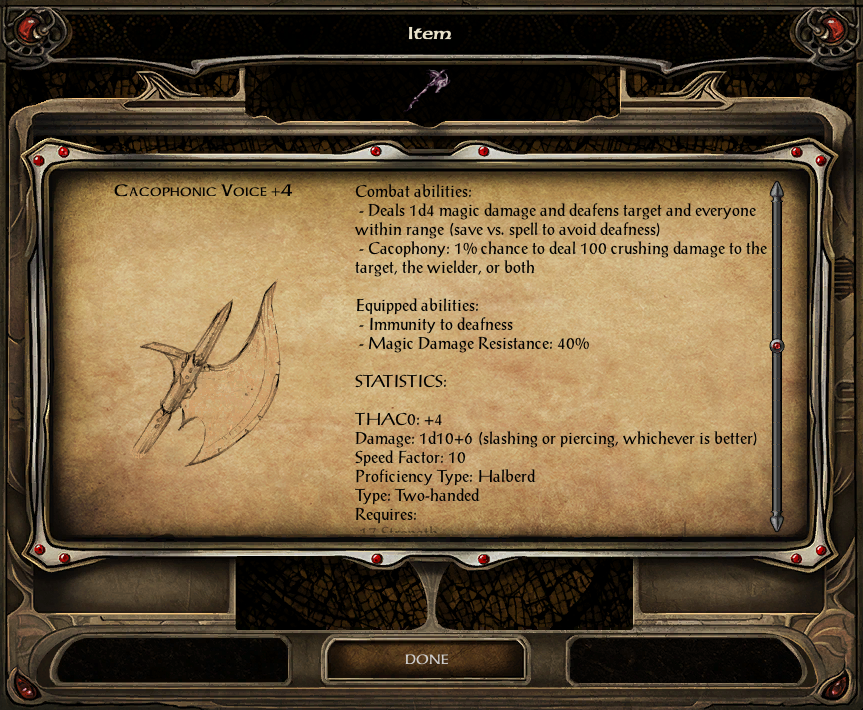 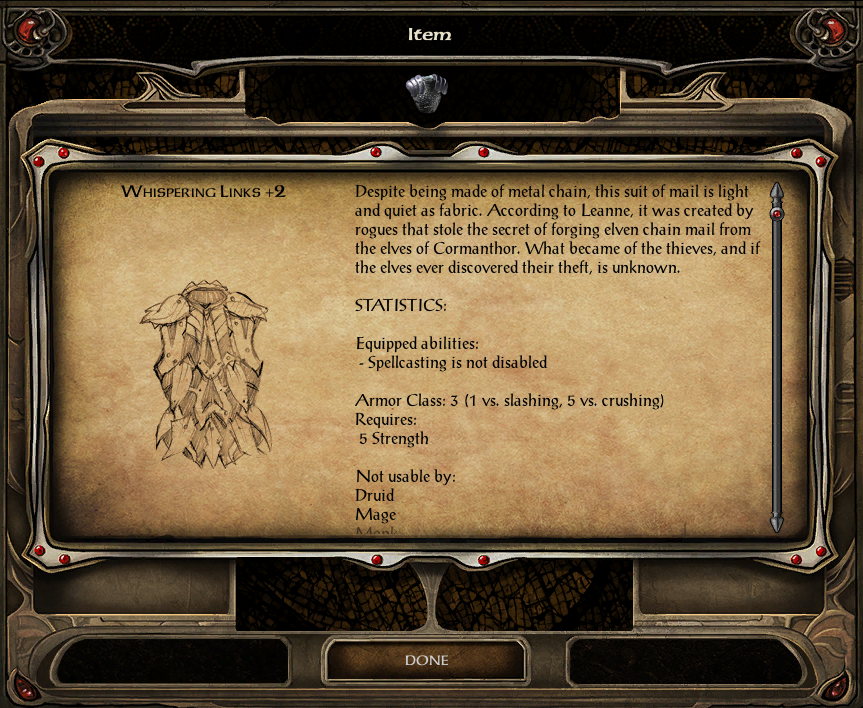 Cloak of the Wild Singer 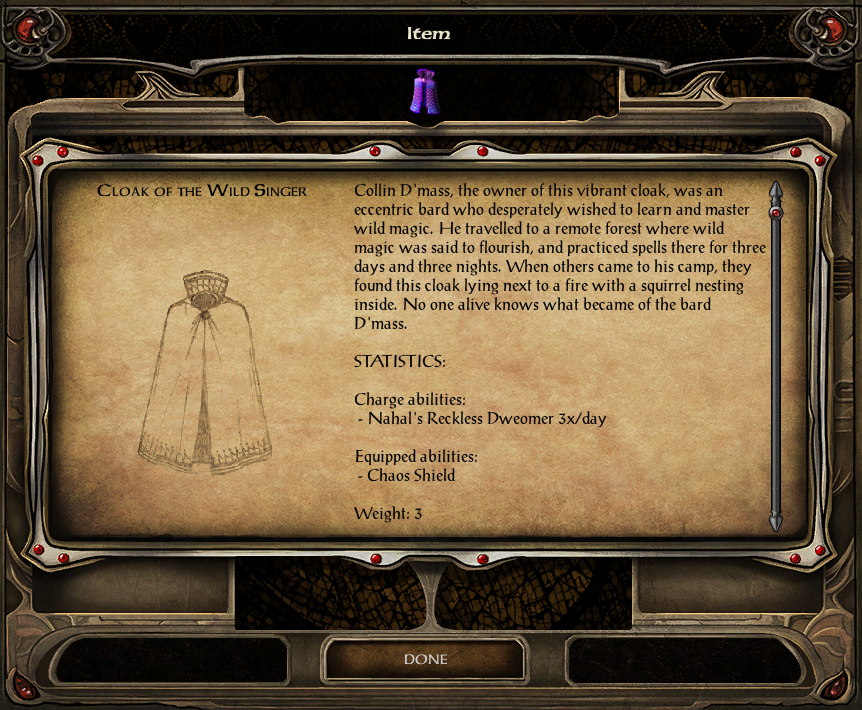 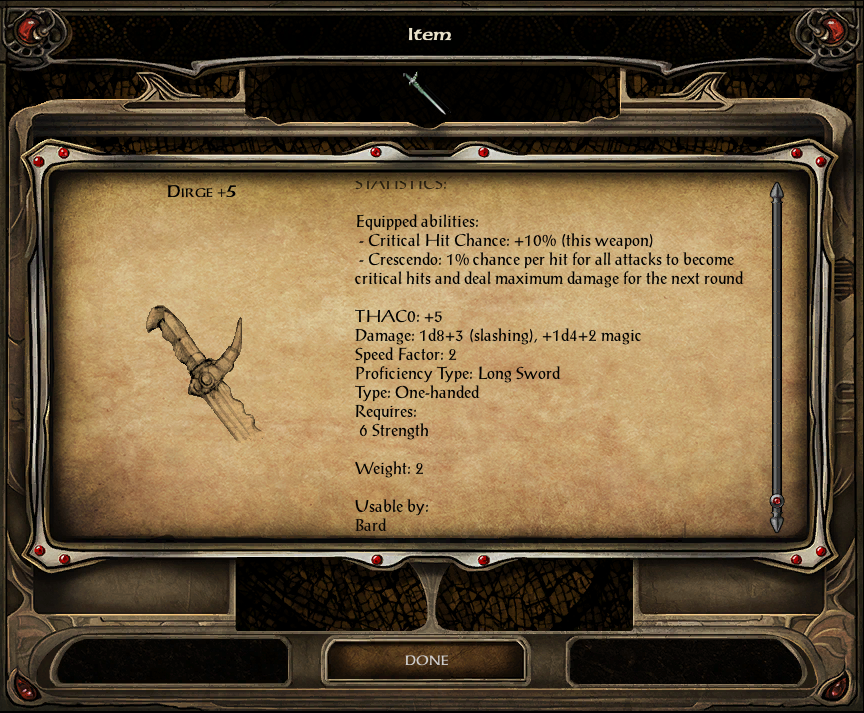 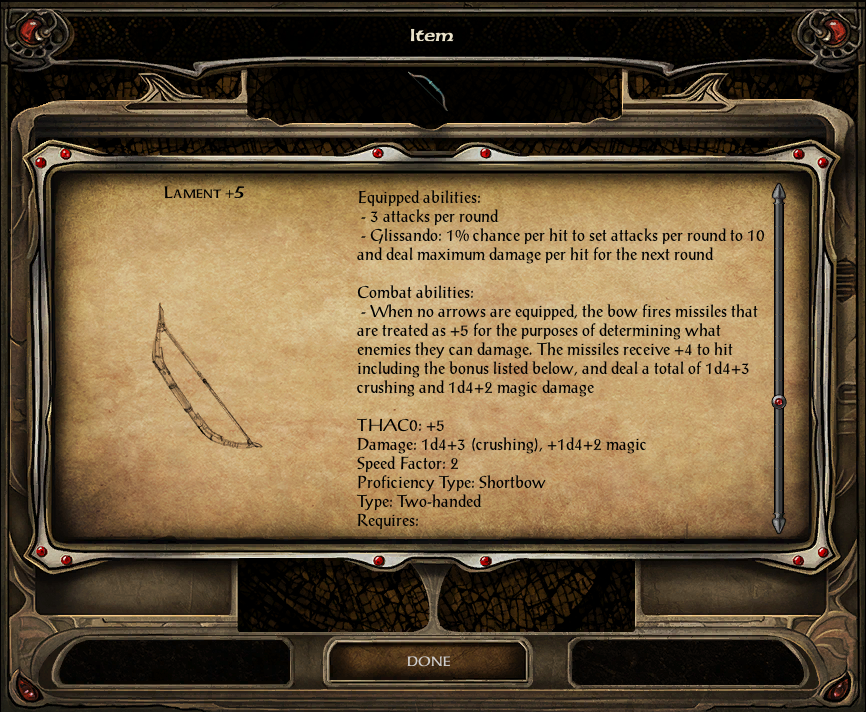