rhymechap1 Member Posts: 1
May 2020 in PST:EE Mods
As has been mentioned on a couple of earlier threads, it appears that the Scale of Souls tweak from Qwinn's original Tweak Pack has not yet been ported to PST:EE. I just bought the game and was setting up with the old mods that I used to install on the original PST, and when I noticed this hadn't been ported, I decided to take a stab at investigating the code for the original tweak and trying to re-implement it. At this point, I have a partial re-implementation of the tweak, specifically the portion that shows the Lawful/Good alignment: 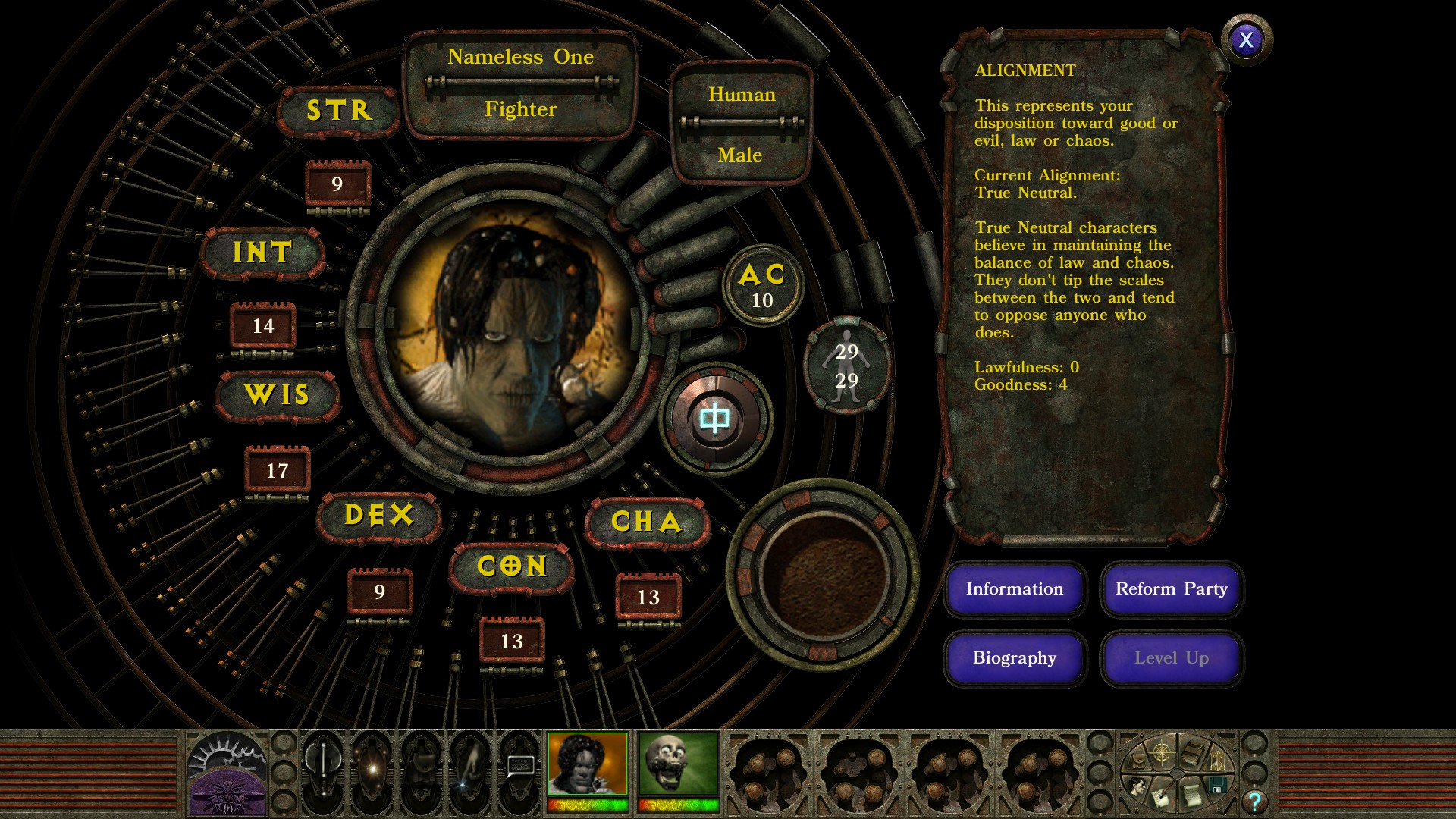 A couple of notes on this:

I decided to start by taking a look at the source code for Qwinn's original tweak if I could find it. After some Googling, I found the code for the Linux port of the tweak pack. Unfortunately it appears that the original tweak was implemented by direct hex modification of the original game executable, making it rather inscrutable for re-implementation purposes since I wasn't able to decode the magic hex string used. Attempting to re-implement it this way would also require understanding and mapping the binary structure of the current game executable, and I wasn't able to find any existing documentation on this, or commit the amount of time that would be needed to do this from scratch.

After some more searching, I came across the source code for @argent77 's port of the Unfinished Business pack, and noticed how the Bestiary image updates were done by modifying the game's Lua scripts. That suggested that the character statistics screens were also implemented in Lua, so after some more digging in UI.MENU using Near Infinity, I came across where the alignment text lookup was implemented:

Adding a check to this function to append the values of global variables indicating the Lawful/Good alignment for the Nameless One does the trick:

Obviously, this is a little hacky since it doesn't handle internationalization/translation into different languages, but it seems to work. A more robust check would probably use the PC field found in the "character" table, though I haven't investigated that to ensure it behaves as expected.

It seemed like it would be fairly simple to extend this code to output the morale stat for party followers. However, the "character" table that these scripts have access to (i.e. the return value of characters[currentID] in the code snippet above) doesn't appear to have a field/key-value pair for the character morale, which I confirmed by dumping the full contents of the table to screen. So, I'd be interested in hearing how that can be done from those more familiar with the game - if that information isn't stored in a UI-side data structure which the scripts have direct access to, then this might have to involve using some of the other Infinity Engine APIs to retrieve this information.