Dartanbeck Member Posts: 18
August 1 edited August 1 in General Discussions NWN:EE
Beamdog,
I'm sorry to be so late to the game on this whole NWNEE

I have purchased each and every NWN product as they came out, then again through GOG to get the DRM-Free digital versions, which allowed me to gather up all of the original materials from the original disc packs and place them in a shrine along with all of the other Bioware D&D games. It's pretty cool - no... it's Very cool!!

I've just discovered the EE for Neverwinter Nights and bought the complete collection. I did some quick tests of my legacy content and it looks to be working beautifully! My "Adventure Gear" (HOF release back in the day) broke during an update long ago, but I still use it for the hair and costumes I made for it. Maybe now I'll be inspired to fix it or just create something entirely new.

Back in the times before the main servers shut down, I was part of several Custom Content teams including CEP, C.R.A.P. and Arcane Space (Turn-Based Spelljammer for NWN) and went by the name of my true hero, Rosietreats (my wife).

My artwork got picked for the Neverwinter Con IV, which was a huge honor for me - it's Rosietreats battling a Blue Dragon 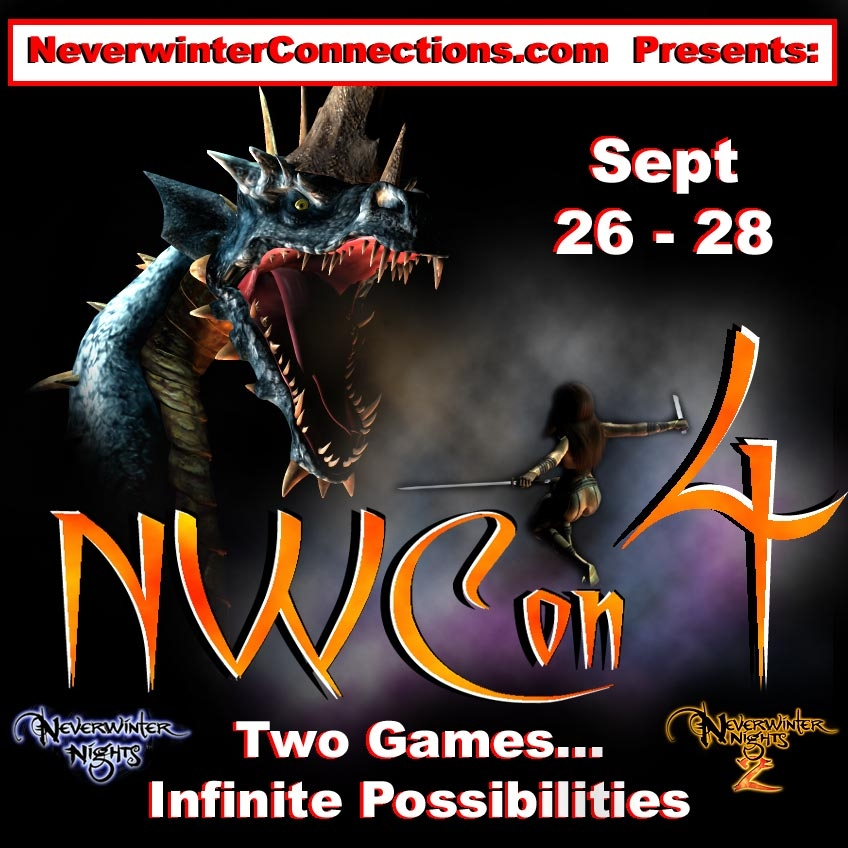 To me, the low-poly aspect of NWN was more of an asset than a burden. I always saw it as the big reason why we were eventually able to have So Much of the D&D library available to us through custom content - like all of those amazing dragon ages and breeds, for example, without being an enormous burden on resources.

Rather than attempting to have lip sync and photorealism, we are treated to more of a D&D tabletop style game with animated miniatures (awesome animations, I might add) through endless environments with breathtaking awe - and I love that!

The game plays so smoothly, even if we're battling an ancient wyrm while hoards of kobolds are approaching our flanks. I did a test world for CEP that I never released, of the lands of Cormyr with scripted ambient life and the Russian Rideable Horse system, with my own unique twists on making the horses a very convenient system - I was also the one who made the CEP content (at that time, at least) all compatible with those horses. Anyway - Cormyr was a real trip - that I could get it working as well as I did. It was meant to be a DM's Boxed Set of Cormyr, all set up with the features of C.R.A.P. (Classic Roleplay Adaptation Project) and CEP (Community Expansion Pack) with an introductory adventure of The Haunted Halls of Eveningstar to inspire further expansion. This intro adventure was well underway, but never completed.

C.R.A.P. gave me the tools to include the ability for adventurers to gather wood and build a camp roleplay style. They could come upon a pit in the cliff, drive a spike, lower a rope and climb down to find lost treasure. Things that we'd normally not see in a casual game of NWN could be easily ignored without using the C.R.A.P. tools, but they were all set up throughout this massive module for those who wish to use them. The added animations are a great roleplay enhancement!

Further, I tested traveling the roads (as well as off road) timing between the villages and cities and it felt just right. Not too boringly long, yet not unrealistically short.

Flocking combined with a crapload of Factions and custom AI made wilderness, village and city life really cool! Just travelling from town to town, we might see a wild cat attack a deer. People in towns and cities carried out everyday tasks depending upon the time of day. While there were a number of NPC characters waiting to be used by the DM, the custom palette included a wealth of Cormyrean factions from the source material I was building from.

Wow. Just talking about this makes me want to dig this project out of the archives and get back to work!

Again, thank you So Much for putting all of this work into what I feel to be the very best D&D experience for folks that simply cannot get together around a table! I've had such great experiences playing, DMing and Co-DMing Neverwinter Nights! I really appreciate all of your hard work and am now going to go enjoy some nice Single Player action from this enormous wealth of fun I just bought!!!