Black_Elk Member Posts: 30
July 2019 edited July 2019 in Baldur's Gate: Enhanced Edition
Doing a Mage playthrough for the first time in a while reminded me about certain aesthetic gripes that have been kicking around since the late 90s, namely how all the mage robes look way too similar. Really it extends to all armors where the basic color scheme for the metal, cloth, or leather components is preset, but its particularly rough with the robes, because the dominant color is always some garish high saturation version of Red, Yellow, or Orange. Only half the rainbow to begin with, and the more powerful the robe, the more prominent and flashy that dominant color becomes.

It would have been cool if the default colors for the resistance and adventure type robes had more variety, basically to cover the full spectrum ROYGBIV.

For the Archmagi robes a much more satisfying aesthetic would have been to set the cloth colors so that they play off the selected Major/Minor colors of character. Or failing that at least having some presets there that don't totally up-end the character's portrait aesthetic. An example of the later idea might have been using Black for Evil, White for Good, Gray for Neutral (used sparingly, not the dominant color for the whole robe but for the details) as much more in keeping with classical color associations, and probably easier to work into an existing portrait than having them all blown out with a default Red for Evil, Yellow for Good, Orange for Neutral. The way its set up right now (pretty much across the board) the more powerful the armor/robe the less control the player has over their character's aesthetic or basic color scheme of their avatar, when it should really be the exact inverse.

Getting closer to the way you want to look over time is an important way to chart character progression, which is why I'm not a huge fan of throwing out aesthetic restrictions altogether (what happens if you give over complete control either with dyes or a freewheeling keeper tweak etc). But it really should move in the direction of more control the more advanced you get, not the other way round.Save the garish clown look for the regular or weaker robes/armors in the game, and give the players more freedom to make something look more badass as they get further along. Obviously for a game that's like 20 years old there's only so much you can expect, but this is one area where I haven't seen any significant enhancements, and no new workarounds built into the base game that wouldn't require other outside modifications. BG2 is better than BG1 in this regard, but the same sort of issue persists over both games. I'm sure the robed appearance for Dual or Multi-Class characters has come up plenty of times as well, but that would be nice to have built in as a choice in the appearance tab for all characters.

Another missed opportunity (not exactly related to robes, but which could be) would have been to give a color association for each school of arcane magic. We've seen these set up a bunch of different ways in graphs or matrices. The colors for the schools are basically arbitrary, but at least you could use them to set up clearer oppositions, or even just base it off which color would look best for the various Specialist Companions in the game and the dominant colors in their standard portrait.

If you use a complimentary color scheme in blocks to set up the oppositions between the schools of magic, you can go around the color wheel and still match the defaults for the associated NPC companions pretty well.

Anyhow, color would probably be helpful there since it's not always the easiest thing for peeps to figure out. Also sometimes they are referenced in different ways Evocation=Invoker, Conjurer=Summoning, Enchantment=Charm, Alteration=Transmuter etc. There can also be confusing overlaps in other areas like with Healing/Necromancy or Universal magic, or where priest spells are described with reference to the arcane stuff. Maybe more colors would help there too. 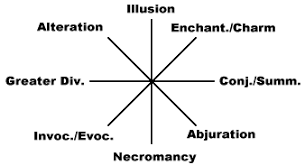 ps. a circlet of the 'specialist school' as a generic equip-able item that set one of the default detail colors of the robe to the associated school of Magic would be pretty cool. That would have been ideal for BG1 at least, since the helmet slot goes largely unused for that game, and it wouldn't get under anyone's skin by changing existing or already familiar items. Could be an alternative way to give more color options without messing around with other stuff. Just drop them on Thalantyr or something?