An exiled elf who is torn between finding redemption and falling to the enticing whispers of Shadow magic. A noble aasimar who greatly desires to help the world's issues and ignore her personal issues from within. The old dwarf cleric who doesn't know the meaning of the word retirement, pressing on with a bad leg. A devout Lorekeeper whose records the present, and ignores the past that is catching up to her. And a halfling warrior that really should keep his mouth shut every once in while, but what can he say? He's just too fun to stay quiet.

These five NPCS are all included together in one mod for you to bring along in your adventures. Each includes their own quests, with a relationship system that is responsive to your overall decision in quests, while giving their own (Sometimes clashing) opinions, remarks, and banters that helps the party feel like a (dysfunctional) family. 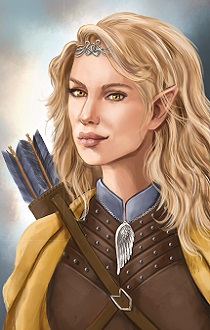 Emily strongly believes in helping people, no matter their issue or who they are. She is aasimar, that is what is in her blood, and what she is supposed to do, isn't it? But she is also a noble of mixed racial heritage and a canidate heir for her house, which holds influence and leadership over a small land in Tethyr in return to service for the crown. She can't ignore this responsibility, and risk the leadership being passed to her brother Thomas, who has less than benign ends and goals, but she can't ignore her heart's calling either. She intends to join the Bhaalspawn to try to do both, but will soon quickly learn her limits and the extent of her brother's scheming. 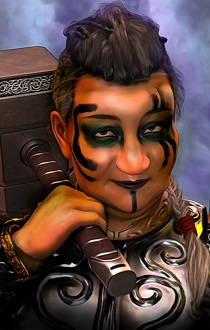 Helga is getting old, and after her leg didn't heal up right, most would hang up their shield in a dwarven hall and grab a pint of ale to replace their hammer. But Helga loaths idleness, and even if she must fight through pain, she'll take any opportunity to hit the road again. And when a chance comes to achieve the healing that she desperately wants for the pain to end, just how far will she push her own needs above others to get what she wants? 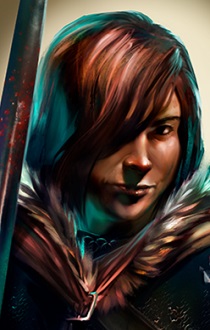 Family financial troubles always seem to spoil Kale's fun. First it was Sammy and his debt, and now it is his deceased dad, whose debts are supposedly his family's burden now. Time with the Bhaalspawn offers both reprieve from the responsiblity and aid, but when the details of the debt and his father's passing become clearer and more disturbing, will he choose to seek justice or revenge when the lines become blurred? 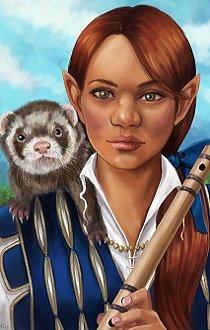 A Lorekeeper with a desire to record everything happening now, especially as it pertains to Bhaalspawn, Recorder would eagerly take another opportunity to travel with them if given the chance. But secrets and lies can only be kept for so long, and not even the mask of a false name can protect her from the reckoning that comes for her. 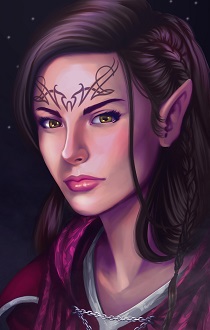 A Shadowmage from Evermeet, exiled for the supposed wrongful accusation of a murder of another elf, Vienxay bitterly wanders the mainland in search of power and purpose. Recently she has learned information of an artifact that may help her master her power of Shadow Magic, but when the significance of the artifact becomes greater than she could imagine, will she follow through with her ambitions or take the chance that she has been wanting for so long that is offered?

Q: When will this mod be complete?
A: Somewhere between March and June. I'm aiming for at least a semi-complete if not complete version to be released in Early Spring for bug testing, and then a true release version after some test review comes back.
Q: Will it be EE compatible upon release?
A: Yes.
Q: Where will the NPCs be located?
A: Emily is in the Mithrest Inn and Helga the Seven Vales in the Promenade. Vienxay is also in the Promenade's exterior. Kale is outside the Copper Coronet, and Recorder is in the Temple of Oghma in the Docks District.
Q: How many quests are there total?
A: Each NPC has one major quest tied to themself. Some are spanned out in segments, possibly extending for a few chapters, while others can be completed in a single chapter if so desired. They each are also a different style: Kale's for example requires a bit of detective sleuthing, while Helga's involves classic gladiator-arena style battling.
Q: What is the content rating of the mod?
A: Recorder has the darkest storyline, but no quest or romance content should exceed T presently.
Q: Will they conflict with other party members?
A: For the SoA portion, Vienxay and Valygar will not get along at all unless she is True Neutral, but the player can de-escalate conflict or just let it happen. Emily will refuse to be in a party with Dorn and will eventually leave if he stays, and will conflict with Hexxat. Recorder and Helga will also conflict with Hexxat, the former leaving, the latter picking a fight (Unless the PC puts a stop to it). Kale on the other hand, will get along with everyone. In ToB, there are no conflicts, though they won't be happy to work with the person they don't get along with either.
Q: Will there be Romance?
A: Everyone except Helga will have a romance, so long as the PC has enough approval with the desired NPC (Explained below). For Emily the PC will need to be any Tall race, Non-Evil, and 11 or greater reputation, for Kale any Short, for Recorder any Short Male, Non-Evil, and 11 or greater reputation, for Vienxay any Tall Male. Additionaly, and only for Kale, he will have a semi-romantic dialogue branch with Mazzy in ToB depending on if certain choices were made in his quest in Shadows of Amn, and he isn't romancing the PC. Romance conflicts will happen at different stages for each NPC.
Q: What is Approval?
A: Approval is the relationship system that measures the NPC's happiness with the player's actions. This is determined by quest decisions and responses during conversation. It's not always as simple as happy with good action, unhappy with evil, law and chaos is taken into effect as well, as well as violent or peaceful solution. It will be impossible to make every NPC happy because of this. A high approval bestows the NPC a +1 bonus to their luck.
Q: Will there be Flirts?
A: Yes, but not NPC initiated ones. I always find those to be strange and out of place.
Q: Where can I learn more about the kits used by the NPCs?
A: Skitias-Stories has more information on the kits used in BG1, which will also be used in BG2. You can also check the support page in BG:EE mods for each NPC.
Q: Do I have to use these NPCs with eachother, or can I take some/one of them?
A: They are designed to have the option of mixing them with other NPCs. So you could put Vienxay in with Wilson and she will say how far she's fallen to be in a party with a bear, if you were inclined to be so cruel. (In fact, Team Make Vienxay miserable would include Valygar, Wilson, Mazzy, and Jan.) Their content is richest when played with their counterparts however, so I recommend it be tried once that way.
Q: Will there be multiple epilogues?
A: Yes. They vary depending on if a romance was pursued, and what choices were made in their personal quests and in your own quest.
Q: Will there be crossmod?
A: If I get permission (Where possible.), then yes. I've played very few BG2 NPC Mods so I'll probably post a question asking for suggestions on a few to try out that would be good crossmod choices. Presently if I get permission it will be for Sirene, and definitely for Petsy/Yvette
Post edited by Skitia on March 15