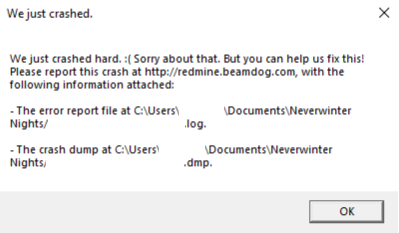 [If Win Defender « Controlled Folder Access » enabled]
1. Deactivate it for now.
2. Run « Verify Integrity of Game Files... » in Steam under Properties → Local Files of the game itself in the Library. //Comment: Or uninstall → reinstall.

If this fails, try: Start Neverwinter Nights\bin\win32\nwtoolset.exe. If you get an error which displays something about « 3D Preview not available », then either reinstall or update your graphic driver. //That was my case. I'd to update from 20.2.2 to the optional/unstable graphic driver 20.4.2.

You can reactivate Win Def Controlled Folder Access but make an exception rule for nwmain.exe.

It took me 4 hours to fix... Might I get a repayment for wasted time?