Blackraven Member Posts: 3,468
March 2014 edited March 2014 in Challenges and Playthroughs
Hello everyone! I'lle be posting in this thread about the adventures of my halfling Bounty Huntress Nelsy Brightweather: 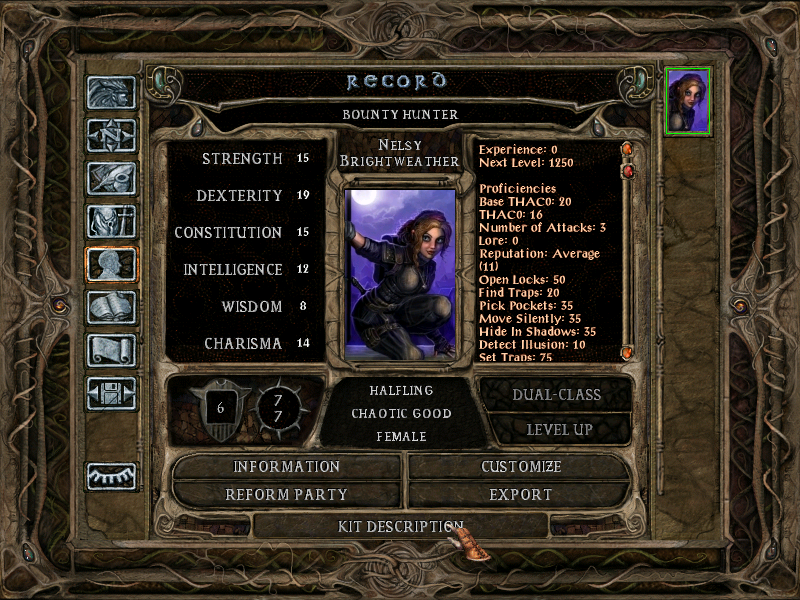 Nelsy's cheerful and rather naive, with no real interest in power but eager to go out and explore the world and to do good. She hopes to leave Candlekeep soon, and visit Gullykin, the nearest halfling village she's aware of, expecting to learn more about halfling culture and about herself because halflings are a rarity in Candlekeep, with her and her friend Deder being the only ones.
Her personality is similar to that of Alora and Imoen, though below the surface she isn't as carefree, as she's really demanding with herself regarding both morality and professionalism. Although most people are easily taken in by her kindness and good spirits, Nelsy's very cautious in her dealings with other people. She's well aware that she isn't an adept fighter, and magic is as frightening as it is admirable to her.
She's clearly good aligned but outspokenly chaotic. To Nelsy illegal and wrong are not synomymous, and therefore she has no scruples with certain illegal behaviour such as stealing from the rich (in order to give to the poor) or tripping on the black lotus as she discovered when she stole some from a visting nobleman and tried it out one starry night with Imoen, which to the both of them was a life-changing experience. Nelsy is likely to get along better with neutral and chaotic aligned characters, be they neutral or good, than with lawful ones (too rigid/uptight for her taste). Evil is out of the question.

I created Nelsy using the dice for pretty much every characteristic: gender, race, class, kit, alignment. I did however pick her weapon proficiencies (daggers and darts) myself and also gave myself ten rolls for attributes plus the freedom to max out one stat (dexterity being the obvious choice).
As you can see Nelsy's already quite skilled in setting traps (75 points), thanks to the trap revisions mod that I'll be playing with. This mod, as its name implies, changes the trap setting system. A trap's damage output depends on the number of skill points invested in traps (so one could go way over 100 skill points, to get stronger traps). Traps are categorized in different tiers: basic, advanced, expert, master, with master being the HLA traps. Setting a single trap costs between 50 and 2500 gold depending on its tier. The mod introduces a bounty-hunter-only alchemical trap and eliminates the vanilla special traps for the bounty hunter. (It also introduces a couple of class-specific traps: arcane traps for the thief/mage and divine traps for the cleric/mage.) The readme can be found here: http://www.shsforums.net/topic/45268-trap-revisions/.
The mod awards the bounty hunter with 25 skill points in trap setting at character creation. It also gives the bounty hunter three traps at level 1, but it eliminates their vanilla special traps. In my case however I had created Nelsy before installing the mod, so when I imported her I still found she had one vanilla special trap. I could delete that one in Shadowkeeper but I won't as I know traps are going to be pretty much her only trick.

As mentioned in the title, my idea is to play no-reload. Unfortunately there are certain areas in the game where movement freezes all the time, which can severely complicate combat. I might allow myself reloads if I feel the freezing caused or strongly influenced the (negative) outcome of the battle.
I'll be playing on core rules, but with max hitpoints for all characters (protagonist, friend and foe).

Ok off to play now, will post my first experiences later.