Out of Commission (mod)

Made and tested on BG:EE, but should work with all Enhanced Edition games.

The Infinity Engine games approach rest with a severe ellipsis: the player clicks the "Rest" button, a movie plays, and the next moment 8 hours have rolled by, everyone has healed up and spells have been memorized. The game will even cast healing magic for you, all to shorten the downtime and get the characters on the road ASAP. If one rest session is not enough, you can just repeat it. While this approach has its merits, I suggest a different dynamic to make time matter and place adventures in time instead of redacting it.

Out of Commission does nothing to the "Rest" button or inn rooms, which still work as before, but suggests refraining from their use. Instead characters can rest with a special ability all party members get. They can rest severally - at different times and away from each other. When the special ability button is clicked, the character needing rest will leave the party (without bothersome dialogue) and lie down. There is no sleeping in the presence of enemies or on city streets, otherwise you can recline anywhere. In 8 hours the character will get up, refreshed, with magic at the ready and 3 hit points healed, and rejoin the party automatically. While he sleeps, the rest of the group is free to leave the area to explore, fight, trade or take on other members. They can stay away for any length of time - when they return to the area with the sleeper, he will step in.

Dorn the half-orc has been hurt, and Branwen the cleric has run out of spells to heal him. Both settle down to rest, leaving just 4 characters in the party. These are relatively fresh and head out to explore the rest of the area, getting a better split of the experience for the greater risk. Had the player wanted to keep character progress equal, he could have hazarded Dorn and Branwen. 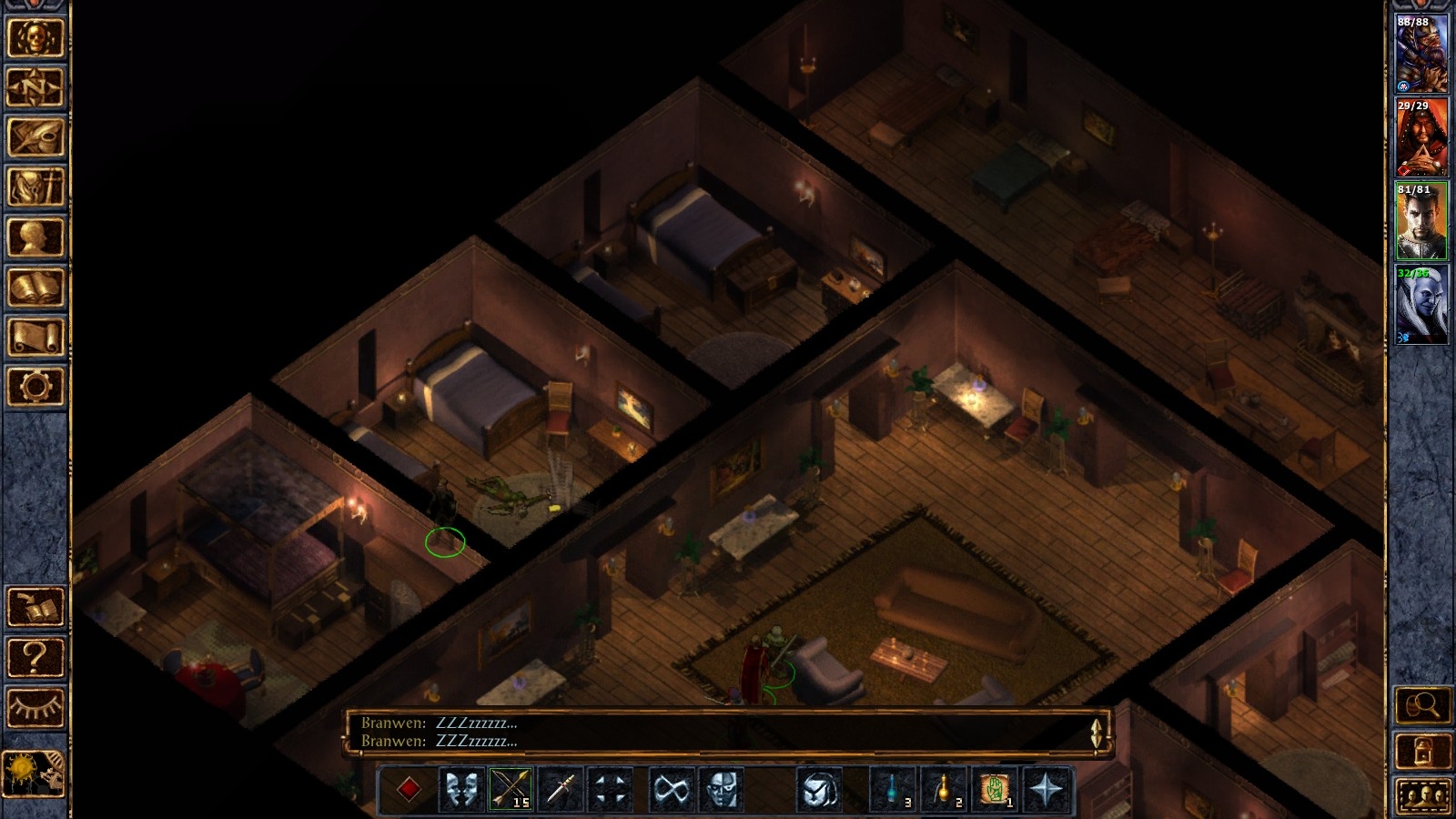 When rest happens in real time, several things change: you only want to have rest those characters who require it and you are likely to be more frugal with spells, because depleted casters will need their full recuperation. A sleeping character can be roused - just move another party member immediately next to the sleeper for a few seconds (longer if the character is sleeping drunk or fatigued). In a pinch you can hurt sleepers to wake them up quickly, and enemies wandering into the vicinity tend to get through after a while. A roused character will be groggy for a short time and must restart his 8 hours to get the benefits of resting, so camp in a quiet corner.

Having laid down a few people, if there is no dungeon nearby or not enough manpower for it, you do not have to pace around the room the whole 8 hours. The special ability works differently for the main character: he will recline but stay in the party, the screen will fade out, the "Rest" movie will play, and time will advance by 8 hours.

A technical note: resting with Out of Commission uses an effect, not the Rest() action, so the PartyRested() trigger will not check true. I am not aware of official scripts of BG:EE relying on that trigger anywhere but in one case where it seems to be for convenience, but mods might use it. In BG2:EE romances and dreams with Irenicus are tied to this trigger. Therefore, the old "Rest" button should still be clicked for special moments in storylines, such as the dream sequences that give you special abilities - after the death of Mulahey, after the Cloakwood Mines etc. These moments are well-known to those who have played the games extensively, which at this point is almost everyone. You should also periodically click it in the second game if you want romances to advance.