LadyEibhilinRhett Member Posts: 1,078
November 2017 in Fan Creations
Hey everyone! So, here's the deal: We've got a bunch of insanely talented and creative people on these forums, many of whom have made some super great characters! We appreciate the heckie out of all the canon NPCs, and that's great, but I think it's time for us all to show each other's CHARNAMES some love!

The purpose of this thread is twofold:

1. To draw and/or describe your own CHARNAME. Please introduce them to us! This thread is kind of meant to be focused on Baldur's Gate, but if you want to show us members of your Icewind Dale party, or your Neverwinter Nights mainchar, that's cool too!

I'll start us off, and, in order to encourage both functions of this thread, I'm gonna do both - show you my own CHARNAME, and show some love to someone else's~! This is Eibhilin "Linn" Rhett. As you may have guessed from the fact I used her name as my username, she's the CHARNAME for my main BG playthrough. She's a Neutral Good skald what carries a big warhammer around and has a huuuuuge crush on Rasaad. She wants to write an epic about all this Iron Throne business once it's over, but she probably does not have the attention span for it. If you want to read more about her, I've been slowly posting the journal accompanying her playthrough here in fan creations in another thread.

That's all for Linn, let's appreciate someone else's character now. 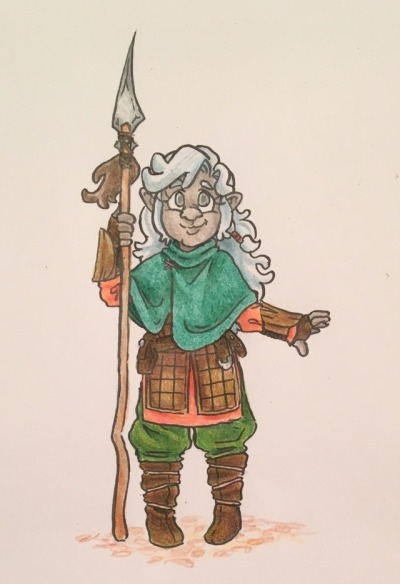 I drew @Buttercheese 's svirfneblin druid Orla, because she is hecking adorable and I really like that one comic Buttercheese did where Edwin gives her a pat on the head. Look at her she is just so cute.

Okay. Now, I'm gonna pass the torch to y'all. Also, a note, if you introduce your CHARNAME in this thread, I will try to draw fanart of them. All of them.