Your method for distributing stats? (other than min/maxing)

SharGuidesMyHand Member Posts: 2,473
February 2014 edited February 2014 in General Discussion (Spoiler Warning!)
Back when I played the original BG1 more than a decade ago, I used to min/max the most useful stats for my character class. Consequently, I ended up with a lot of paladins with only 3 intelligence. ;-)

With the release of BG:EE, I decided that I wanted to roleplay a character similar to the method described in Tord's famous "Lilly Black" playthrough (see here: 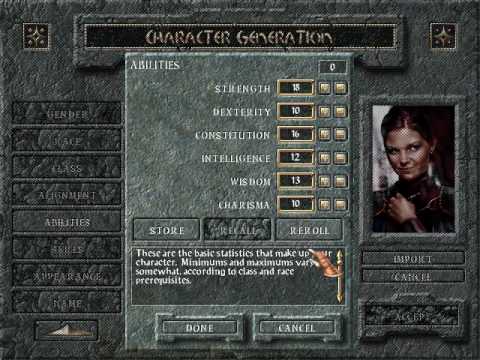 - which meant creating a character without absurd-looking and obviously OP'd stats.

I made a few "rules" for myself:
1. My character's stat total would not be higher than the highest stat total out of the NPCs (which meant less than Dorn's 90).
2. I would use the individual stats of the other NPCs as a barometer for deciding my own.
3. My char would have only one fully maxed stat.

Here's the character that I eventually created for my current playthrough, a female human vanilla ranger (it took a helluva long time to decide on a portrait, race, and class, but those are topics for other threads, LOL): After only a few rolls, I had rolled an 88 stat total - a very respectable roll, but not higher than Dorn's 90, and only equal with Ajantis' stat total.

Here's a basic rundown of how I decided each stat:

Strength - I imagine my character as having above average strength, but not being a hulking amazon. Looking over the strengths of other NPCs (with emphasis on the female ones), the spectrum runs from 8-9 str wimps like Alora and Imoen, to a singularly unique, 18-plus str amazon in Shar-Teel. I felt that my character should basically be smack in the middle, in the range of warrior-priests like Branwen or Jaheira, so I settled on 14. (Incidentally, as a ranger she's required to have at least 13 str anyway.)

Dexterity - I imagine my char as being very fit, and obviously skilled with a bow (as you can see from her picture), but perhaps just a tad less athletic than a master thief like Imoen or a trained dancer like Skie. So 17 dext was appropriate IMO.

Constitution - I imagine my char as being fairly healthy, enough to get a bonus from her con, but at the same time, I was conscious of not raising too many of her stats too high. So I settled on 15.

Intelligence & Wisdom - I basically just replicated Kivan's and Jaheira's stats for these, since I imagine that my ranger would basically share the same outlooks and sensibilities as they do (i.e: being "nature smart" instead of "book smart"). I imagine my character as being respectably smart and sensible, but not necessarily an outstanding genius in either category. As someone who was raised and educated amidst the books of Candlekeep's library, but always with a secret focus on the outside world, I imagine that she's educated just enough to be literate (which would mean at least 9 int.), but her wisdom should be emphasized thereafter.

Charisma - I decided that this would be the stat that I'd fully max, as there are no other NPCs with 18 char (except maybe Keldorn IIRC) and I wanted to give my char a unique trait that would make her stand out from the other NPCs. Besides, I imagine my char as someone who will generally get a favorable reaction from others (just look at her pic after all, LOL), and from a roleplaying perspective, it would best explain how she'd be capable of gathering and keeping together a motley collection of mercenaries.


So there's my story... Anyone else have their own?
Baldr014.bmp 2.9M
Post edited by SharGuidesMyHand on February 2014