Blackraven Member Posts: 3,271
March 2014 edited April 2014 in Challenges and Playthroughs
Hello everyone, after my halfling bounty huntress's abrupt death in Gullykin at the hands of Jenkal, it is time for Teyl Shimmerdusk to enter the stage. Teyl is another halfing but one much darker of heart than the late Nelsy: a NE (shadowkeepered) Strifeleader of Cyric/Thief. 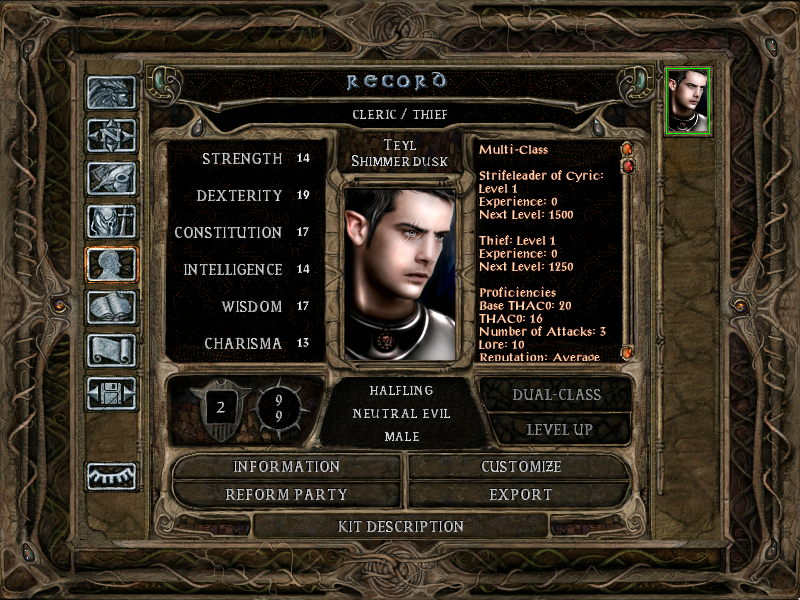 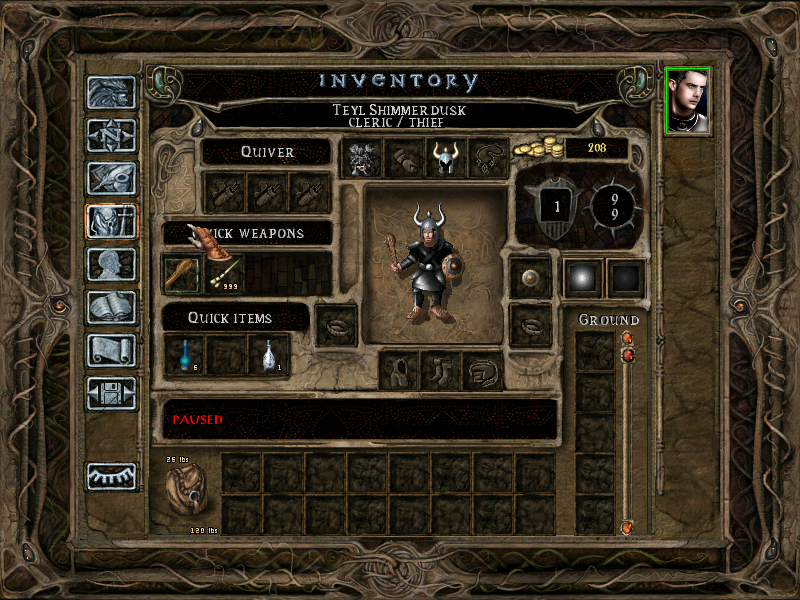 Teyl, unlike his megalomanic and reckless gnomish counterpart Tiax, is a cunning, conniving and calculating figure. He isn't overtly evil or violent nor does he enjoy cruelty or the suffering of others just for the sake of it. He takes good care of his appearance and image, is generally polite to strangers and even willing to do "good" if he sees personal benefits that make his benevolence worthwhile. He has no reservations about making promises or accepting commitments he won't be likely to live up to, if such behavior serves his interests. In such situations Teyl tends to avoid outright lies though, preferring to rely on ambiguity or omission of information in order to manipulate reality in his favor, without having to fear that any blame is going to be pinned on him. His subtlety and seemingly mild manners may not make him a prototypical Cyricist, but his ways might well be the more effective, or so at least he believes.
The presence of such guiding figures of unquestionable moral calibre as Tethoril, Imoen, the priests of Oghma and above all Gorion have given Teyl a sense of morality he might otherwise not have had, but unlike the people that surround him Teyl believes that everyone ought to look after their own interests. Teyl appreciates nature, female beauty, and art.

Teyl isn't a physically imposing figure, even for a halfling. He makes up for this however with his wit, his knowledge of poisons, an affinity with trap setting, and the powers bestowed upon him by Cyric.

His stats are the result of a legit 93 roll (in a best of 100). After starting the game I reluctantly changed the distribution of his stats in shadowkeeper to fit his character better, i.e. lower STR (the original roll was actually 17), higher INT and CHA. The high CON (also original roll) can be justified in part by his exposure to the poisons he experiments with, which has fortified his health. On the other hand I favored Teyl by maxing out his DEX.

Like Nelsy, Teyl will be partly relying on traps to survive, since I'm (again) playing/experimenting with a mod called 'trap revisions'. This mod, as its name implies, changes the trap setting system. A trap's damage output and other effects depend on the level of the trap (not the player). The level is decided by the number of skill points invested in set traps (so one could go way over 100 skill points, to get stronger traps). Traps are categorized in different tiers: basic, advanced, expert, master, with master being the HLA traps. Setting a single trap costs between 50 and 2500 gold depending on its tier. The mod introduces a number of new traps, some of them class-specific, such as the cleric/thief-only 'divine trap'. The trap revisions mod is the main reason I'm playing BGT (rather than EE, for which the mod isn't available as of yet). The readme can be found here: http://www.shsforums.net/topic/45268-trap-revisions/.

I awarded Teyl with a second set trap skill at level 1, one more than a normal thief and one less than a bounty hunter (who gets other benefits besides 3 traps at level1) in the aforementioned mod. I did this so that it actually makes some sense investing skillpoints in trap setting from the outset. (Being able to set only one trap until I get to level 6 as a thief, is little incentive to develop one's trap-setting skills early on.)
I also gave him a set of Shadow thief apprentice armor, which at AC6 gives a +1 AC advantage over normal studded leather as well as a 5% bonus to HiS. I did this mainly for esthetic reasons, as normal studded leather looked awfully light brown on Teyl, who prefers black, and anthracite.
Both adaptations of the original character are slight cheats I'm aware, but by no means game-breaking.

I'll be playing core rules, with maximum hitpoints for all characters in the game.