The Thieves of the Coast, an SCS No/Minimal Reload playthrough with a band of rogues

Blackraven Member Posts: 3,273
April 2014 edited December 2014 in Challenges and Playthroughs
Dear reader, welcome to yet another "Let's Play" thread by my hand. This time the story is about Lenno Luckyhand, a mischievous but certainly not evil Halfling Swashbuckler. 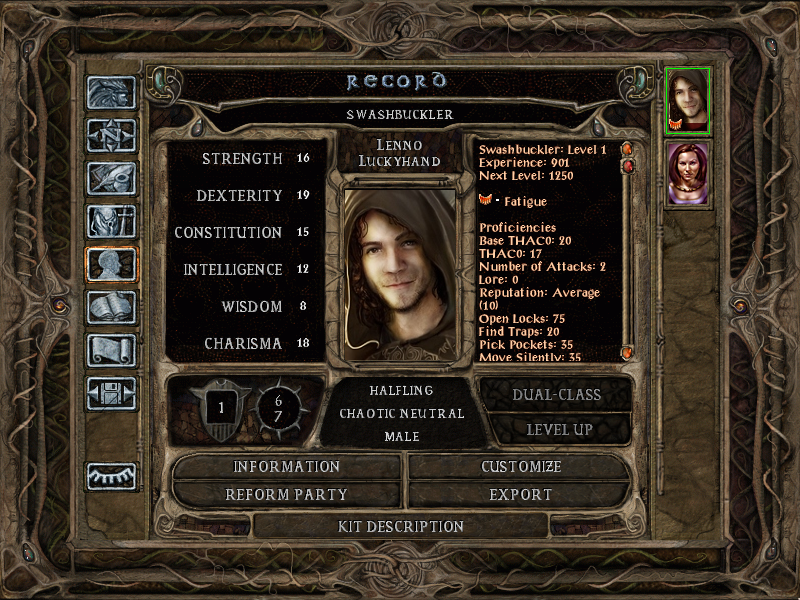 Lenno was given his surname by the Candlekeep Watchers he often invites in the evenings to have a few ales with him and to play some cards at Winthrop’s Inn. Unlike the Watchers, Lenno himself isn’t a big drinker, but he’ll make sure that his friends’ cups are never empty. At the end of the day, the gold always goes to Lenno, much to his inebriated friends’ amusement. Little did they know, when they named him Luckyhand, that Lenno wouldn’t rely on luck in order to prevail. Let us say that Swifthand would have been a more appropriate surname for our little Swashbuckler friend.

Thanks to his buoyant and carefree nature and to his charisma, Lenno is generally well-liked with Candlekeep’s residents and visitors alike. He would get into trouble time and again for not complying with a task or for vexing the priests with fellow mischief-maker Imoen, but never anything serious.

Lenno’s high CHA is reflected in an attractive appearance, a disarming smile, and most of all his vivaciousness that makes people love his company. His high CHA doesn’t make him a strong leader though. He’s undisciplined, he’s more likely to turn his back on problems than to try and solve them, and he can be very indecisive and capricious. These traits are aspects of his CN alignment. He gives little thought to either law or morals. Laws are artificial, uncalled for and gratuitous rules of the game of life according to Lenno. He doesn’t see why he should abide by them. When it comes to morals, Lenno certainly isn’t immoral. He is no ruthless power-hungry climber that strives to fulfil his ambitions at all costs. He also wouldn’t inflict physical suffering upon others unless his own physical wellbeing is at stake. On the other hand he has no scruples about larceny, smuggling, or swindle. As a matter of fact he finds those activities quite thrilling.

Lenno has below average WIS, and can therefore be naïve in his dealing with others. His naïveté (susceptibility to what others tell him), combined with his CN alignment may make him commit good or even evil deeds at times or otherwise act in ways that aren't normally like him.

He has always dreamt of forming his own band of likeminded adventuring scoundrels, so that’s what he hopes to accomplish upon leaving Candlekeep.

The idea of this run is to play a full party, using rogues only throughout the entire trilogy. I’ve edited a number of NPCs in both games. Kagain (Fighter/Thief), Viconia (Cleric/Thief), Aerie (Bard), and Valygar (Fighter->Thief) have become eligible party members. I’ve kitted many of the game’s original rogues, but that’s something you can read about if/when I recruit them. I’ve also kitted Kivan into a Stalker and I’ve decided that even though a Stalker is technically not a rogue, he is eligible as well since Clint Eastwood Kivan, especially with the Stalker kit, feels sufficiently roguey to me.

I’ve read the AD&D Complete Thief’s Handbook for inspiration, not only for Lenno's sake, but also to flesh out the NPCs. The book for example mentions six basic motivations for being a rogue: fame (or infamy), greed, justice, loyalty, survival, and whim. Another motivation could be laziness. Lenno will mostly be motivated by whim (he’s a bit of thrill-seeker) and to a lesser extent by fame (he’ll like it if people recognize him as ‘that dashing young Swashbuckler you’d like to be your friend’) and by laziness. Other NPCs will have different motivations, which will make for interesting party discussions. For example Yoshimo’s basic motivation will be (geas-incited) loyalty, whereas Kagain is obviously motivated by greed, and Kivan by justice.
The book also gives a number of sample rogue archetypes: Artist (who engages in thievery for the challenge or aesthetic pleasure), Desperado (outlaw), Folk Hero (‘Robin Hood’), Kleptomaniac, Mobster (raised in crime), Professional (mercenary), Street Urchin/Victim of Circumstances, Trickster, and Vigilante. The book’s definition of Trickster is a bit broad to my taste, it encompasses both Charlatan and Thrill-Seeker archetypes. I’d like to see these two as separate archetypes. Again, different archetypes will more or less go with different game characters. Kagain and Yoshimo will be typical Professionals, Viconia is a Desperado, Coran could be a Folk Hero or Artist, Kivan and Valygar make great Vigilantes, Alora could be the party’s Kleptomaniac, Eldoth and Jan Jansen Charlatans, Montaron a Mobster or Street Urchin, and and Lenno will be a Thrill Seeker.
The characters’ different motivations and personalities will play a part in the course the party takes. The NPCs won’t be Lenno’s minions; they’re going to have a say in things.

- Rogues (and Stalkers) only
- Minimal reload (i.e. no-reload until Charname dies for the first time)
- NPCs may be resurrected, the first time with no consequences, but subsequent resurrections will have them lose one point of CON each time.
- Core difficulty, with max hit points for all creatures in the game.
- If a party member leaves or is dismissed, they receive a portion of the party’s gold proportionate to the number of party members at that time. They also get to keep their equipment.
- Once Lenno has party members to take into account, decisions on where to go, how to deal with a given situation etc, shall be taken democratically. If no logical RP outcome can be found, I’ll roll the dice. (Props to @Lemernis for this approach.)

***
When he got up this morning one of the Candlekeep priests told Lenno that he was to leave Candlekeep with his foster father Gorion. The priest also gave him some spare gold from the old sage to buy some equipment from Winthrop for their trip. It was a meager sum though, so Lenno decided to increase his funds a bit by visiting the inn’s guest chambers. It yielded him a bit of extra gold, a potion of clarity, a silver necklace, a star diopside gemstone and a flamedance ring. Lenno couldn’t fence the jewellery or the gem to Winthrop. He would surely be found out. Thus he kept the items in his pockets for now, so he could sell them elsewhere. From the gold he had acquired he bought himself a suit of studded leather armor, a buckler and three sets of throwing daggers, Lenno’s weapon of choice.

He then left the inn and made a round to do a couple of chores and to say his goodbyes. Hung-over Fuller, one of Lenno’s drinking buddies, was particularly generous, rewarding him with an enchanted dagger for merely fetching him a quarrel of crossbow bolts. At the Infirmary he talked the Priest of Oghma into giving him a free healing potion, and he stole another from one of the cabinets. In the Bunkhouse an assassin tried to kill our young Swashbuckler for motives unbeknownst to him, but much to his own surprise Lenno reacted quite astutely, taking out his throwing daggers and, after some running around, slaying his foe with them. It was only after the battle was fought, that Lenno took the time to think about what had happened. It made him feel uneasy, in spite of his carefree self. He hurried to Gorion, hoping to leave Candlekeep sooner rather than later. Gorion seemed even more eager to leave, so that’s what they did.
They didn’t get very far however, as they were ambushed in the evening by a huge man in heavy armor and three minions. Gorion urged Lenno to flee, and tried to take them all on. He slew two ogres and put a priestess to sleep, but the many spells he cast at the armored figure didn’t stop, let alone fell, the latter. Things started to look grim when Gorion proceeded to attack the warrior with his dagger. Before Lenno could do anything to distract him, the brute slew Gorion with his mighty great sword.
Lenno fled the scene and remained hidden all night without resting. The area held other dangers than the warrior and his priestess, namely Gibberlings and wolves, but they were taken care off with his throwing daggers.

The next morning Lenno’s emotional state was comprised of a mix of grief for the loss of his foster father and excitement about the prospect of exploring the wide open world without the confining presence of Gorion. The least he could do, he decided, was to return to Candlekeep, not to stay but to tell the Keeper of the Portal what had happened, and to arrange for Gorion’s burial. On the way he ran into Imoen who had somehow snuck out of Candlekeep to follow him. He welcomed her company, at least for the time being.
***
Post edited by Blackraven on December 2014