Let's discuss the direction of the new UI.

Pelmaleon Member Posts: 14
March 2016 edited April 2016 in Baldur's Gate: Siege of Dragonspear
Firstly, I'd like to state that this isn't one of those "don't fix what ain't broke because my rose-tinted glasses will shatter and my nostalgia boner will become flaccid" posts. I hate that anti-intellectual platitude with a passion because things (virtually anything) CAN be improved or revised through ingenuity and hard work.

Having said that, I strongly believe that the direction many of the UI changes went down are veritably immersion-breaking and tawdry.

Here are the ones which, when I see them, forcibly push me out of our great role-playing game and (varyingly) shatter the fourth wall:

Ability to scroll too far off of maps and see blocks of darkness, instead of stopping the camera at the edge to enable our imagination to fill in the blanks off the map.

Dark boxes around text - this includes the pixelated boxes around journal entries, the ones which pop over a person's head during an action scene, and the ones which are underneath the location text on the maps, all which now get rid of the feeling of a hand-drawn world and map.

The new map UI is too virtual and not fantastical enough, like it used to be. Leave the options ("Area map background" and "map notes") to the options menu. And the removal of the World Map button in favor of a written "World Map" also just pushes the game away from a strikingly immersive experience and into a cheap one. Lastly, the zooming out from your characters to the map completely eradicates the old feeling of having hand-drawn maps and now just makes me feel like I'm playing a too-virtual video game.

I have one more complaint which doesn't have to do with the UI but instead customizability: why leave out the ability to learn spells automatically on higher difficulties? That "feature" in the original Baldur's Gate was completely idiotic. Sure, if one had the time to replay the game over ten times then it would make each playthrough a slightly more unique, thought-provoking experience as you had to utilize different tools and be without other important ones because of spell failure. But for most people, the people who only have the time to play through the game a handful of times (which is still well over hundreds of hours), it greatly impedes the flow of the experience to have to change the options to "Normal" instead of "Core" everytime you get a new spell.

Anyway, I hope you take some time to ruminate about some of the changes you made and about how much they are (varyingly) affecting immersion and the harmony of art styles and themes (the cartoonish cinematics which strayed away from the original game's vision of a sometimes dark and gritty fantasy world are another story for another time...).

Thanks for reading, and thanks for working on one of the greatest games of all time.

Please post your comments below if you agree and/or disagree with my contentions but more importantly please post why.

Edit: I've also noticed that all dropcaps (the initial, fancy letter of the first word of the first sentence of books) have been removed from item descriptions. This feels like yet another decision which pushes the game away, instead of towards, a fantasy-esque feeling.

And I know the entire EE map art style is probably too late into the development process to be changed, seeing as Siege of Dragonspear just game out, but was it impossible for the devs to utilize the old map, seen here?: 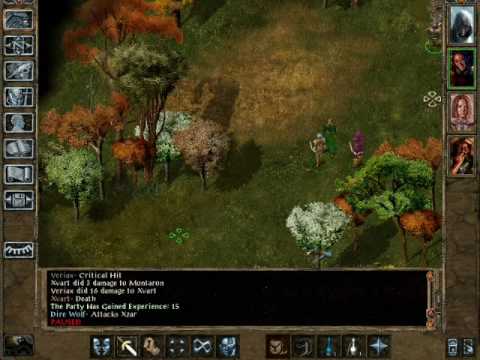 It gave off the impression that the player character had a personal, detailed map created for him by friends at Candlekeep (or that he bought or stole) - a map which showed impassable terrain blocked by gargantuan mountains, dense, lush, and possibly dangerous forests, and more.
Post edited by Pelmaleon on April 2016