semiticgoddess Member Posts: 14,829
February 2017 edited May 2019 in General Modding
I've long dreamt of creating an Alchemist class, and with help from @kjeron, @subtledoctor, and @Demivrgvs, I've finally put it together.

The Alchemist kit has fewer spell slots than any other mage, but it can create unique potions very unlike the kind you find in the original games, plus several types of highly volatile grenades. This kit adds 34 new items with vivid descriptions and novel effects, from a sickening healing potion in the form of Vampire Milk...

...to a lovable lump of moss that can raise the dead... 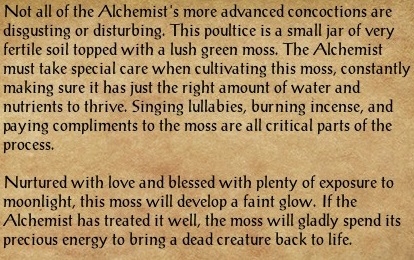 ...to weirder things like Elf Tendon Wands, Snake Lymph, Bonemeal Eyedrops, Blood Nectar, Fairy Oil, and apocalyptic 953-pound War Engines. All of the icons are taken from Icewind Dale 2 to give them a unique feel. Bear in mind that your Paladin may decline to use some of the Alchemist's less vegetarian options (as ingesting the blood of children is frowned upon in some circles).

I've taken the kit through BG1, SoD, BG2, and ToB, making sure the kit is balanced and bug-free. The Alchemist is a unique support character that can do a variety of different things, but getting the most out of the Alchemist's items costs hundreds of gold in the early game, and thousands if not tens of thousands of gold in the end game. But it's worth it.

Kit description:
Alchemists are mages who dedicate their lives to the study of chemistry and potionmaking. Some use their talents to sell potions and tonics, some turn their skills to adventuring, and others are motivated solely by the pursuit of truth. Alchemists are always searching for new ingredients to fuel their businesses and laboratories, and when the local economy falls short of their expectations, the Alchemist must set out on foot. Alchemists excel at making valuable brews and dangerous explosives out of whatever ingredients they can cobble together.

Alchemical Genius:
- Can create potions and grenades at any time outside combat. Alchemists get additional benefits from their own potions.
- Can use Poison Weapon once per day at level 1. Gains an additional use of Poison Weapon every 4 levels after.

CONCOCTIONS: Given the right ingredients, an Alchemist can concoct any manner of potions and brews. The process is similar to purchasing goods at a store, but the Alchemist can manage ingredients much more efficiently, making his or her concoctions much less expensive than a conventional apothecary's.

More experienced Alchemists can brew a broader variety of potions and manufacture stronger explosives. There is no limit on how many potions and grenades an Alchemist can create, provided he or she has the resources to make them.

POISON WEAPON: The same skills the Alchemist uses to create potions to soothe pain can also be used to inflict it. The Alchemist can apply a thin coating of poison to a weapon, directly injecting the toxin into the victim's bloodstream. Multiple strikes can further poison the target, but only one dose of poison can be applied to the weapon. Alchemists can develop deadlier poisons as they become more experienced.

For the next 2 rounds after using this ability, any creature the Alchemist attacks must make a saving throw or suffer poison damage for the next 5 rounds. The effects stack and vary based on level:

The poison cannot be applied to a grenade.

- Hit Die: d6
You can download the kit at the bottom of this post, as a .rar file or a .zip file. The most recent version is recommended for balance reasons, but if you like, you can download the less-balanced earlier version, which allows the player to sell normal potions to the Alchemist Workshop and has some un-nerfed items.
Post edited by semiticgoddess on May 2019
AlchemistKit.zip 5.4M
AlchemistKit, early version.zip 5.9M