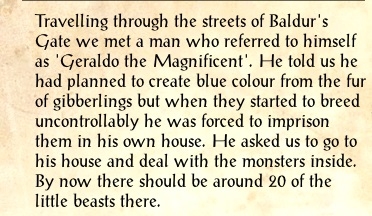 This is a quest from ascalons quest pack.

I have a problem.
I cannot find the gibberlings.

When I return to him he won't re-iterate the instructions and the info isn't in the journal.

Does anyone know where to find them?

When I tried Google, this is all that I could find. That info is correct but insufficient.