thar_thaazdhen Member Posts: 16
November 2017 in Baldur's Gate II: Enhanced Edition
Hi, this thread is to discuss the effect of spell sequencers on saving throws that an enemy has to make in contrast to a situation where spells would be cast without a sequencer. I created this thread based on discussion here.

I have BG2:EE v2.3.67.3 (current latest), SCS v30, Ascension v1.4.24, Wheels of Prophecy v6, aTweaks v4.51, Rogue Rebalancing v4.91, Unifinshed Business v26, Wizard Slayer Rebalancing v1.3 and Big World Fixpack on top. I didn't install all features from the listed mods, I rather selected the components I liked. I don't believe any of my mods changes the behavior of sequencers.

1. Enemy Commoner with Save vs. Spell 0; Minor Spell Sequencer - Blindness & Blindness.
I tried 50 times and observed that the commoner almost always threw his Save vs. Spell dice exactly once.

It happened only once that I saw two throws made by the commoner.

Comment: It is as @BelgarathMTH says - putting Blindess into sequencer twice wastes one slot. On rare occasions, however, we see that enemy has to save twice.

2. Enemy Commoner with Save vs. Spell 20; Minor Spell Sequencer - Blindness & Blindness.
No saving throws were visible in the console window and the commoner got always blinded twice.

3. Enemy Commoner with Save vs. Spell 10; Minor Spell Sequencer - Blindness & Blindness.
Either no saving throws were visible and the commoner was blinded twice; or exactly one saving throw was made to save against both instancess of Blindness.
Comment: No surprise here.

Comment: Were two throws observed because the spells were different? No - see below.

.
Comment: The game engine is probably lazy - it scans spells in a sequencer for unique "Save Type - Save Bonus" pairs and throws only once per such pair.

However, I also observed a case where two throws had to be made initially and also each following round. 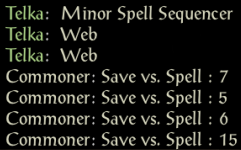 Comment: Area of effect spells are no exception to the way sequencers handle saving throws. 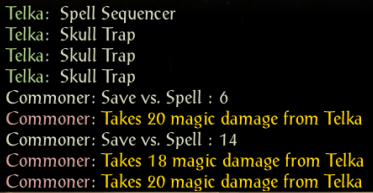 He had to make just a single saving throw for three successfully saved Skull Traps other times.

In conclusion, I think it's safe to say that Spell Sequencer - 3x Polymorph Other to turn Firkraag into a squirel doesn't offer any significant/reliable advantage over 1x Polymorph Other 2x Anything.

This is not how I would expect sequencers to work. I wish enemies had to save against every spell separately..