Saving against the Command spell

jmerry Member Posts: 1,705
May 2019 in Baldur's Gate: Enhanced Edition
As is well known to experienced players, the Command spell is extremely potent in low-level play, knocking enemies up to 5 HD unconscious for a round with no save. That round is frequently enough to kill them.

But then you try it against higher-level enemies - and it's still far more effective than a first-level spell has any right to be. 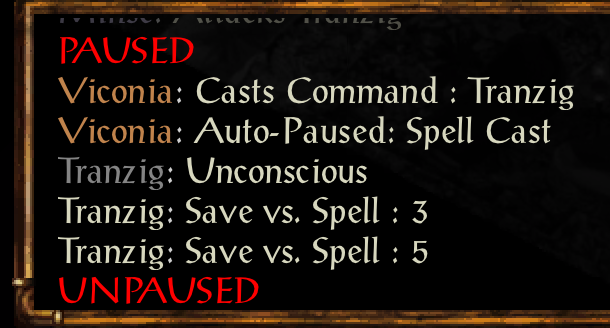 Tranzig is a level 6 mage, with base save vs. spell 4 and a ring of protection +1. Against a spell with no bonus or penalty, he should save 90% of the time. So this time? He saved. He saved again. And he still went down. He did not survive that round of unconsciousness.