ed_boy Member Posts: 142
May 2021 edited May 2021 in Challenges and Playthroughs
In this playthrough, I will be doing a solo run of the Improved Anvil mod (referred to as IA).

About Improved Anvil:
The best way I find of explaining IA is to first talk about Kangaxx. Before TOB was released, Kangaxx was probably the strongest foe in the game, and served as a bonus boss. Lots of players when they first encountered him found themselves unable to beat him conventionally. BG2, being a game with a lot of options, offered a lot of ways to make this fight against such a terrifying foe easy, such as: There are a lot of options available, and each player has their own threshold for what they consider a cheesy strategy. Mod makers like to disable strategies that they find cheesy, but this will be their personal interpretation of what is considered cheesy.

Sikret was a modder in the mid 2000s and the creator of Improved Anvil. Of the mod creators, he had probably the strictest interpretation of what was considered a cheesy strategy, and was not afraid to implement it in his mod. Others have disagreed with his determination of what is and is not a cheesy strategy, and the internet being the internet, these discussions were rarely civil. Notable things that Sikret considered cheesy include: The vast list of strategies that Sikret considered cheesy and the degree to which we went to prevent these strategies caused a lot of controversy. For instance, every major enemy is immune to missile weapons (to prevent hit and run tactics) or immune to disabling spells (to prevent spamming reloads until it happens to hit). A large amount of strategies and tactics were removed from the game, and encounters which previously had several potential approaches were reduced to one or two that Sikret considered non-cheesy.

This is not to say that IA is a bad mod - quite the opposite. If you are happy to play within the constraints of what you are considered cheesy, you will find that it is a very well-made mod - it provides a great feeling of progression and it provides encounters that remain challenging all the way to the end of TOB. It does require some degree of power gaming, and certain classes (notably thief) are pretty much dead weights, and this ends up adding a puzzle element to the game - at any given point you will have a number of strong encounters potentially blocking your advancement, and the puzzle element will be which encounters will provide loot that lets you beat other encounters.

History of IA and solo runs:
Back in the 2000s, I used to visit the Bioware forums (that unfortunately are no longer up). These forums had regular no-reload threads. Most of the no-reload participants would run vanilla or SCS for their difficulty, but there was one person named saros_shadow_follower who would run solo no-reload IA on insane difficulty.

Saros had quite a few solo noreload runs of IA, and beat it several times with different classes. There was a lot of friction between Saros and Sikret - Sikret considered a lot of solo strategies to be cheesy (and in some way the concept of soloing a party game to be inherently a bit cheesy), and declared that Saros's strategies were either cheating or had been falsified.

I started following this events at the time that IA was on its fourth version. Version 5 was released when I was following events, and despite Sikret declaring the it was more challenging and unable to be soloed, Saros still posted a few solo no-reload playthroughs. This went on for some time, and finally in early 2010, Improved anvil version 6 was released.

At the time of release, IAv6 was by far the most controversial mod of BG2, and it may still hold that title (depending on how some of the more questionable romance mods are considered). The website hosting it (Black Wyrm's Lair) was having funding problems, and it was initially behind a $30 paywall. It was leaked and later made public, but the content of the update was not well received. A lot of the changes between version 5 and version 6 were explicitly anti-solo scripts - if the player was playing with four or fewer members of their party, then the game would change - enemies would use their most powerful abilities more often, important loot would not drop, and at one point in early TOB the player character would be straight up killed.

Saros was indeed unable to do a solo no-reload of version 6 of the mod, and instead did a no-reload with a full party. In the decade since this has happened, Sikret has retired from modding and Saros has retired from IA runs. Another member of the BWL forums, Critto, has taken over development of IA since the retirement of Sikret. Critto's changes have included EE support, and crucially, removal of the anti-solo scripts. Although the anti-solo scripts have been removed, I am not aware of any solo playthroughs of IAv6.

About this playthrough:
Although Saros did no-reload runs, I will be reloading in this run. However, I will try to only use strategies that would be safe for a no-reload run, so this may be considered a route for anyone who does want to no-reload IA. I will likely retry each encounter a few times once a strategy is found to make sure it is no-reload safe, so there may be minor inconsistencies in the screenshots I provide.

I will be playing through BG2ee version 2.6.6.0, with the following mods:
Tweaks Anthology:
Improved Anvil 6.52:
IA Tweaks:
In addition to this, at the start of the game I will be giving myself the tomes that are obtainable in a BG1 playthrough, and two bags of holding for inventory management.

I will cover the unmodified parts of the game extremely briefly, and focus on the new improved encounters.

I will be using imgur to document my progress - each update will consist of one or more imgur albums that cover the encounter(s) in the update.

The challenges that will be faced:
A good example of an IA enemy is the coin golem: 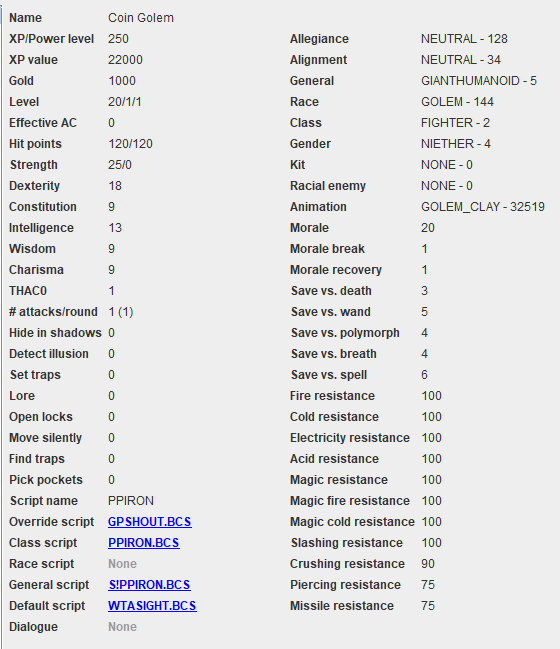 As terrifying as its base stats are, it has equipment on top that that make it scarier. It is under a perma-haste effect that means it attacks three times per round for 5d10+14 damage that attacks as a +4 weapon. It has an effective THAC0 and -10 and AC of -4, and needs +3 or better weapons to hit. It is immune to any spell that would disable it. This is considered a mnior golem by IA standards - we will fight lots of them, and they will always be part of a group. Later fights in the game will spawn these as reinforcements.

In order to destroy the coin golem, we need arcane protection spells - Stoneskin will completely block the damage that it deals, and PFMW will provide four rounds of protection. In that time, our best damage output will be to attack it with piercing weapons, which it will only take 25% damage from.

In vanilla BG2, the arcane caster was the strongest class in every aspect - the best buffer, the best debuffer, the best crowd control, the best DPS and the best tank. IA enemies are a lot harder for a mage to deal with offensively - for a coin golem, it would take most of a mage's spellbook to take out one, and they never travel alone. The mage does remain the greatest defensive class in the game, though, and in order to survive the game we will need access to arcane buffs. The classes that we can use are:
Our early game will revolve around doing as much unmodded content as possible. We will use potions, scrolls, and other consumables to allow us to beat some of the modded encounters. At 2.55m experience we will gain access to level 6 arcane spells and at 3m experience we will gain access to HLAs, and these two power spikes will herald us entering the mid game - we will have a somewhat standard set of buffs, and out strategy for most fights will be seeing if we can keep this set of buffs going long enough to beat the fight. The late game comes when we assemble our endgame equipment and become resistant to dispelling, with each equipment-sourced buff being a power spike.

Things to watch out for in IA include:
Post edited by ed_boy on May 2021