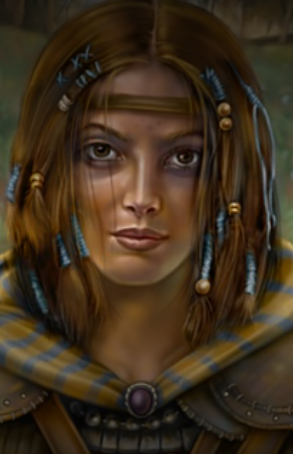 Mod Overview:
Nalia At Last is a very long awaited romance for Throne of Bhaal. It is a standalone Nalia romance for ToB with a romance branch to continue a romance from De'Arnise Romance or Arnel's Nalia Romance

If for some maniacal reason you have both installed, the Nalia Romance will be assumed since that one has you married at the end.

For non-EET games, you'll have an additional option to summon a romanced De'Arnise Nalia or the other Nalia Romance. Otherwise you'll have to summon standard Nalia and romance her.

Mod Details:
-A small friendship track.
-2 romance tracks, one standalone, one dependent on having either the De'Arnise or the Nalia romance installed.
-5 new Epilogues.
-Flirts.
-A few new interjects to match the standard romance interjections of the other Bioware NPCs.

Romance Qualifications:
Standalone: Non-Standalone If you are evil, have low reputation, or give certain answers to the Solar as the story progresses, expect the romance to eventually break, as she'll feel you are corrupting her and too dangerous to get closer too. As a warning, the Non-Standalone romance is a bit bumpy, if things seem over, there might still be hope.

Current Status: Beta
-This is basically done. All that is left is polishing, some rewrites where the dialogue isn't quite right, grammar corrections, etc. It's not 100% tested, and there may be bugs. Current Events delay my original estimates, so I want to release something now.

Some probable questions and answers to them:

Q: Where can I get support?
A: This is the main support thread. You can also message me on my discord channel, here. I have a contact form on my website as well.

Q: The style seems different from Arnel/JCompton
A: Early on I decided to have Arnel/JCompton's Romances merge into one romance branch. They are the *same* Nalia, so it was probable she would go under similiar development and crisis. I wrote for what I felt that Nalia would be, rather than looking too much back on the other two. As an aside, I found similiarities between Nalia and Emily, so it was a challenge to make sure Nalia was Nalia. Rewrites and polishing will aim to make sure there is no overlap in distinction. Lastly, Nalia in ToB is different than SoA, and having a different author is refreshing in a way as it can help show that shift.

Q: Can I translate this mod?
A: This mod is traified for translating. On release, it will largely be stable and no further content is planned to be added. There is some Crossmod with SkitiaNPCs for its future update, but those pieces are already in place in the traification. Just send me the translated text and I can add it to the mod.

Q: Nalia is OOC! Can you fix it?
A: Let me know where, and I'll polish it out. This is still in beta, and I've not gotten a chance to go over the writing a third or fourth time yet. I try to stay in spirit of the character.

Q: What is the content/suitably rating.
A: This is very T. One flirt can get a bit spicy, but it's still T and probably tamer than the De'Arnise Romance or Skitia's NPCs.

Q: When will this mod leave Beta:
A: When the storm passes and I can work on it again. It just needs a few more days of love. I want to release it now because I am also getting married in just a couple of weeks, and there's a chance that the little window of time I have may be no time at all. (Also if something happens to me, it would be a tragedy if it never got released after all this time!)

Skitia For this mod, coding, dialogue, and everything else included.

Arnel For the original Arnel Nalia Romance, and the variable.

Jason Compton & Kulyok For the original De'Arnise Romance, and the variable.

Please do not re-upload, republish, sell, compile, or redistribute this mod without permission!
Post edited by Skitia on November 10
0
«12»