UncleSporky Member Posts: 100
November 2019 edited November 2019 in General Discussion (Spoiler Warning!)
I'm not sure if the title is a bit over-exaggerated. Mostly I would like to prompt others to share their own examples which might rival this one in its relative uniqueness.

When referring to rare hidden content, I don't mean in the combat sense of rare rolls, or rare luck in a particular fight...I mean content that most players are unlikely to see without going far out of their way to experience it.

And I can't think of a better example than turning Irina into a squirrel.

In Siege of Dragonspear, there's a quest called Days of Wine and Stealing which is offered by a halfling named Irina in the Elfsong Tavern. She has run out of Ruby Wine and wants you to steal some for her from the Ducal Palace basement. There are a number of ways to do this quest...you can simply do as she asks, or you can tell her you won't steal it and she'll give you 50 gold to leave in place of the barrel. If the character speaking to her is a dwarf they can brew her up something better. Or if the character is a mage or druid, they can offer to transform regular wine into Ruby Wine. And this is where the rare part comes in.

If the mage has 15 or less intelligence, their spell will simply fail and create awful-tasting wine, and they'll have to complete the quest another way. However, if the druid has 15 or less wisdom, the wine will transform Irina into a squirrel permanently, unless you cast Dispel Magic. She will be too freaked out by her experience to be worried about Ruby Wine anymore and you essentially fail the quest. It's a fun little scene, if you can get it to happen. 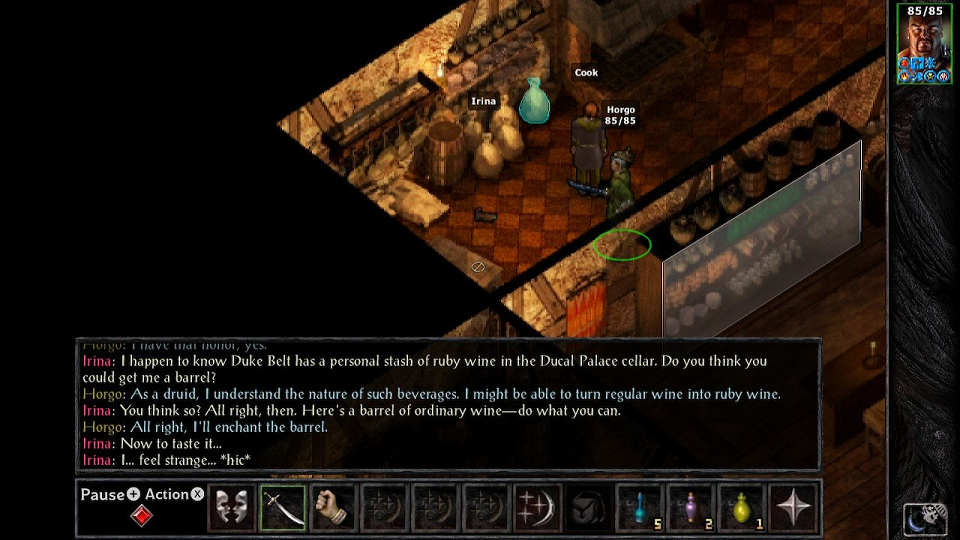 But I got to thinking...under what circumstances would a player's druid even have 15 or less wisdom at this point?

Jaheira is a fighter/druid with 14 wisdom...but you can't have her in your party at this point in the game. The only party members you could have while doing this quest, to my knowledge, are Minsc, Dynaheir, and Safana. So this has to either be a main character druid, or else a multiplayer/created-party druid.

Wisdom is a druid's primary stat. Most people know it's a stat you want to have as high as you can get for the bonus spells. Not only that, the minimum wisdom for a druid is 12, so there are only 4 possible digits that can get you into this situation. Not only that, but wisdom also happens to be the easiest stat to raise permanently out of all of them, with three tomes in Baldur's Gate 1. If you're playing Siege, you likely imported from BG1 to continue the story.

Thinking about that further...most people probably aren't playing Siege on its own as their first and only BG game. It seems a bit unthinkable to me. Generally people playing it are already going to be fans, and are already going to know a bit about the mechanics at play, and therefore roll their druid with high wisdom. The only thing I can imagine is self-imposed challenges like building your character on whatever your first roll happens to be.

Druid is also one of the rarer classes, maybe second only to paladin? It can only dual with fighter, and only for humans and half-elves. Human fighter dualed to druid is impossible for seeing this scene as it requires 17 wis to dual. Human druid dualed to fighter is barely possible with 15 wis, but again unlikely.

So ultimately to get yourself into this situation, here is the chain of events:

You could say that even rarer would be seeing the dialogue after dispelling the polymorph, because you also have to go out of your way to do that.

I don't know how anyone could've learned about this except by browsing around in the Near Infinity explorer.

As far as I can tell there is only one clear reference to this on the internet, a comment left here in 2018.

Is there anything else in these games that you would consider buried deeper, or even less well known?
Post edited by UncleSporky on November 2019