True Necromancer, Val'myr Zaur! His journey to ultimate power over life and death!

Vallmyr Member, Mobile Tester Posts: 2,382
May 2015 in Challenges and Playthroughs
So bit of a forward. I've been planning this run for a looonngg time. I've played through BG1 many times, BG2 twice, and never finished ToB. I've never done The Tower of Durlag, Frostwolf Isles (or whatever it's called), or Watcher's Keep. A lot of this will be new to me so I'll reload if something cheesy happens but I'll avoid save-scumming to re-do a fight or change a dialogue choice. I'll also do my best to not wander around aimlessly as I am apt to do when I play RPGs >_> I'll try to keep the story pacing alright and sidequests I'll only mention unless something major happens during one.

I had issues deciding mods or no mods and finally settled on just using the BG1 NPC mod. I'll probably do a full IWD:EE story run using Scales of Balance, Tome and Blood, and other such mods. Decided to go with a half-drow, though Val'myr canonically is a full drow, due to that without mods I can't be an Elf Cleric/Mage.

Val'myr is an acolyte of Velsharoon since he rises to power in the same year that BG starts. Val shall practice both divine and arcane necromancy! I normally roll until I get 87 points but I got 90 points a few rolls in and went with that. 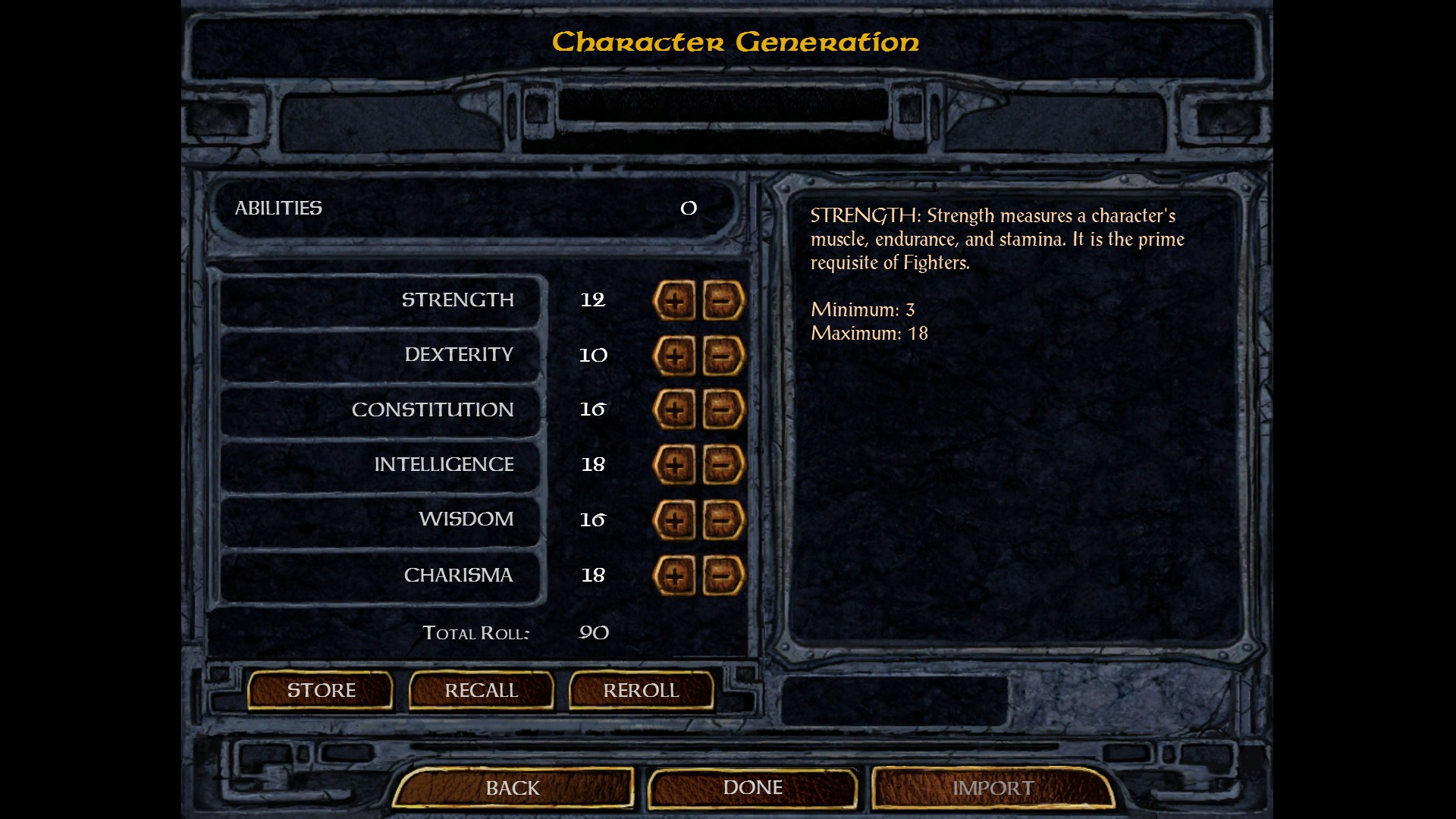 It seems Gorion is in quite some hurry today to go somewhere called the "Friendly Arm Inn." I packed my tomes and bought some gear from Winthrop before heading out and doing some chores around my home of Candle Keep. Unfortunately when I was "liberating" some misplaced items around the keep to sell, I was attacked by an assailant! 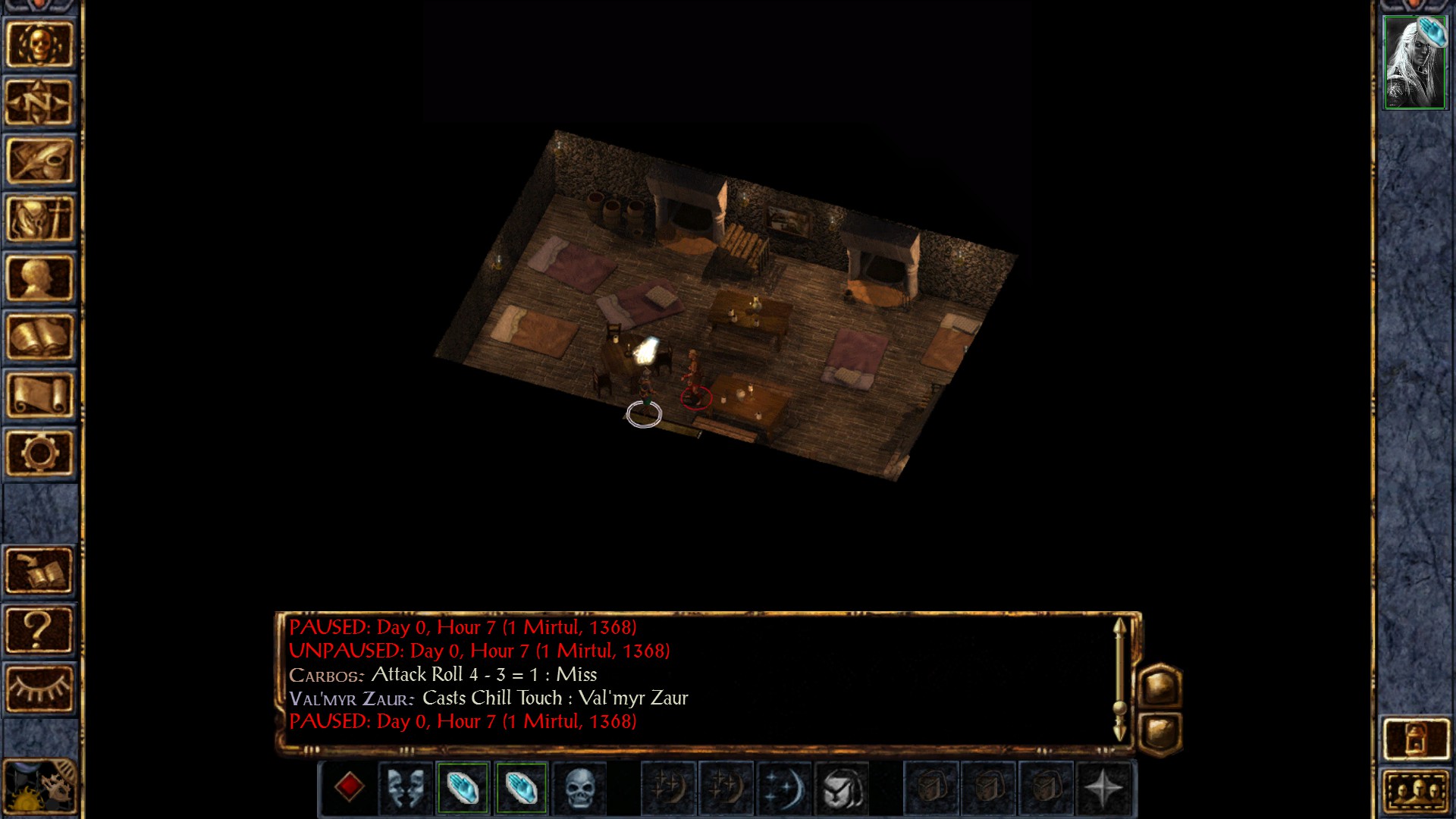 I reached for my spell tome, may Vlesharoon guide me, and charged my hands with a necrotic chilling touch! He stabbed and the blade dug deep into my shoulder. I lunged at him, my hand outstretched, and landed a blow square in his chest! Blue and black energies coursed through his body as he crumpled beneath the spell's touch and fell.

As I exited, Karan accosted me. I told him of the attack. He spoke and informed me to get prepared as the keep wasn't safe, it would seem. After some more chores, such as killing rats, delivering a book and a sword, and other such trivialities, I was yet again assaulted! I raised my mace and deflected the man's blows to the best of my ability. I struck him once, twice, three times with my mace and he fell. His skull was bloodied as his body fell to the floor. I took a few hits in the fight myself, as well. I kneeled and prayed for Velsharoon's power over life and death to restore my wounds. The cuts on me then sealed themselves! Truly this new God is a worthy patron. Fortunately no one knows of my devotion to Velsharoon. I'm sure many would be disgusted by his teachings.

Imoen, such an adorable girl, spoke with me as I made my way to Gorion. She obviously was asking if she could join Gorion and I on our journey and so I told her I would ask him if she could join us on this most grand adventure!. . . to some inn or something. 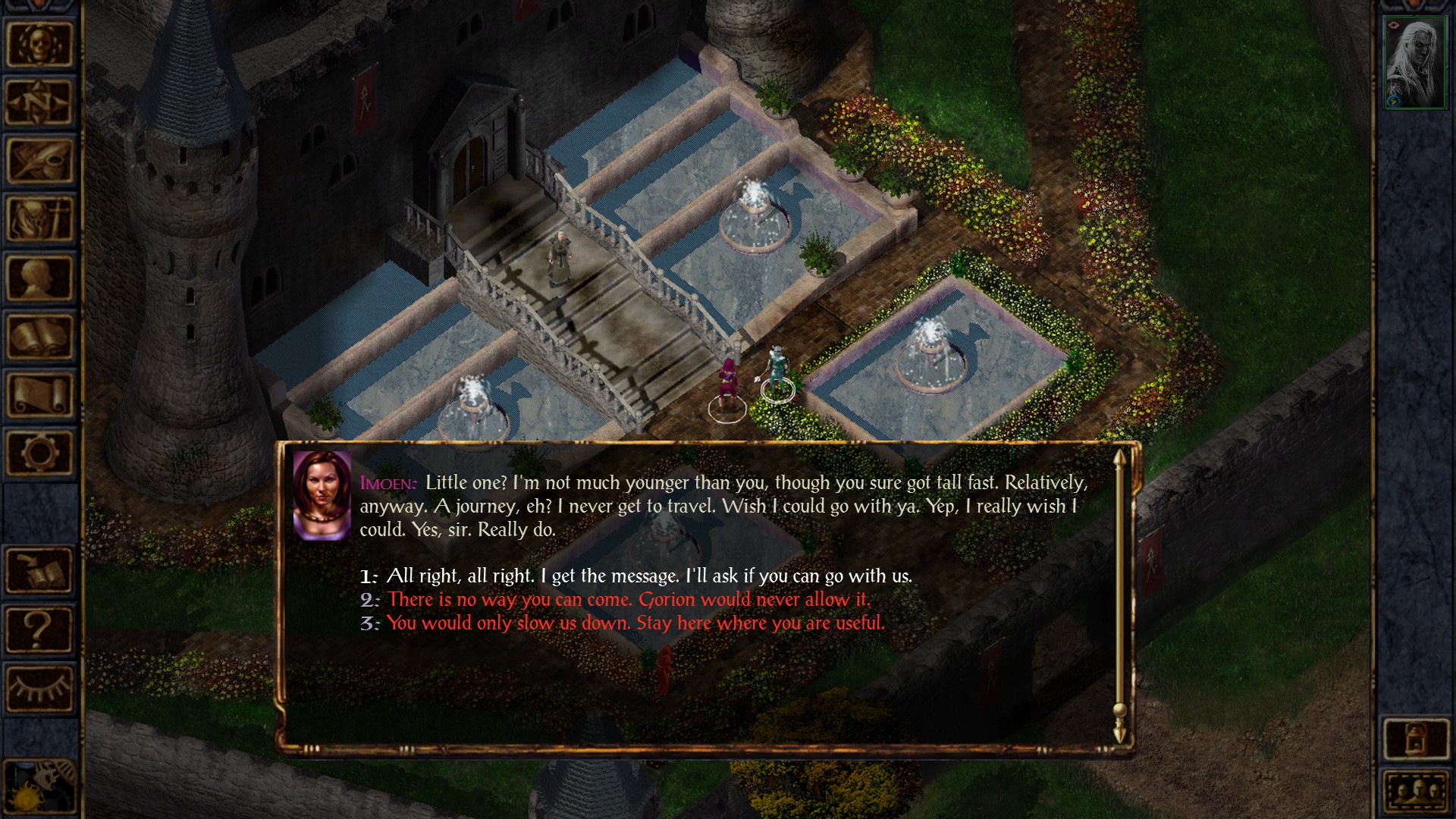 Unfortunately it would seem Imoen could not join us, such a shame. I donned a helmet to cover of my *ahem* somewhat-unique heritage as well as an armor and shield. It would seem this venture to a simple inn may be dangerous. Gorion still won't tell me why we're going there.

We left and night was soon upon us. I always preferred the night to the day. The sun can be much too bright at times. A band of armored men and women approached Gorion and I. A singular giant of a man wielding a massive sword in one hand. Truly a sight to behold. He mentioned something to Gorion about handing over his ward. I was far too enchanted by the black armor and sword to pay attention when suddenly they attacked us! Ruffians, all of them! I was raising my mace and shield, ready to fight, when Gorion told me to run. Since I prefer living and Gorion is much wiser than I am, I took heed of his words and ran. I hid and watched as spells of both the divine and arcane were flung back and forth! Arrows bounced off Gorion as if he were made of stone! He used his arcane might to strike down two ogres and the archers! All that was left were the armored figure and what appeared to be a female priest of some sort. The priest dispelled Gorion's protections and he was struck down! I looked upon in horror as one of the two people that truly cared for me was struck down, right before my very eyes. 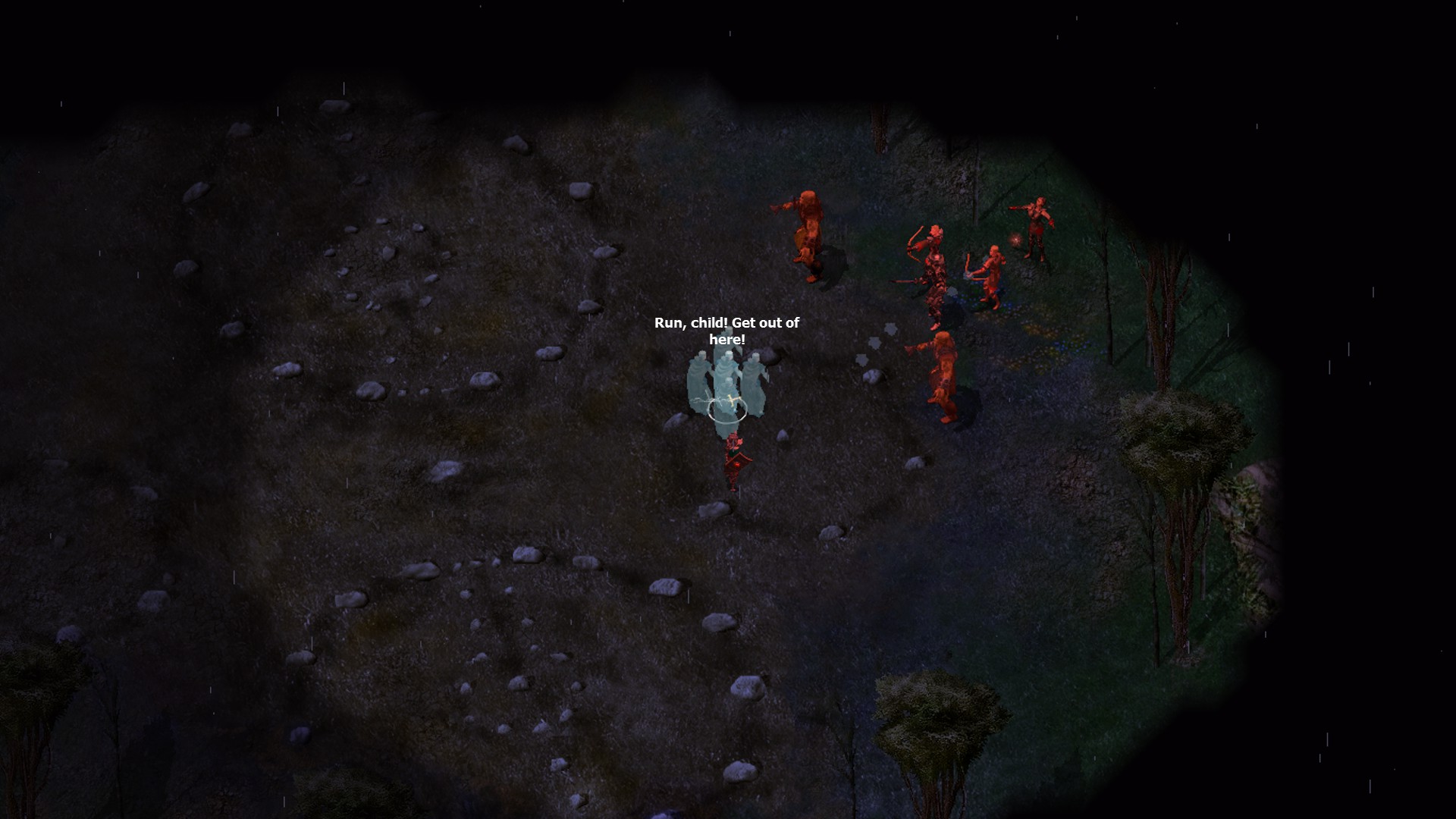 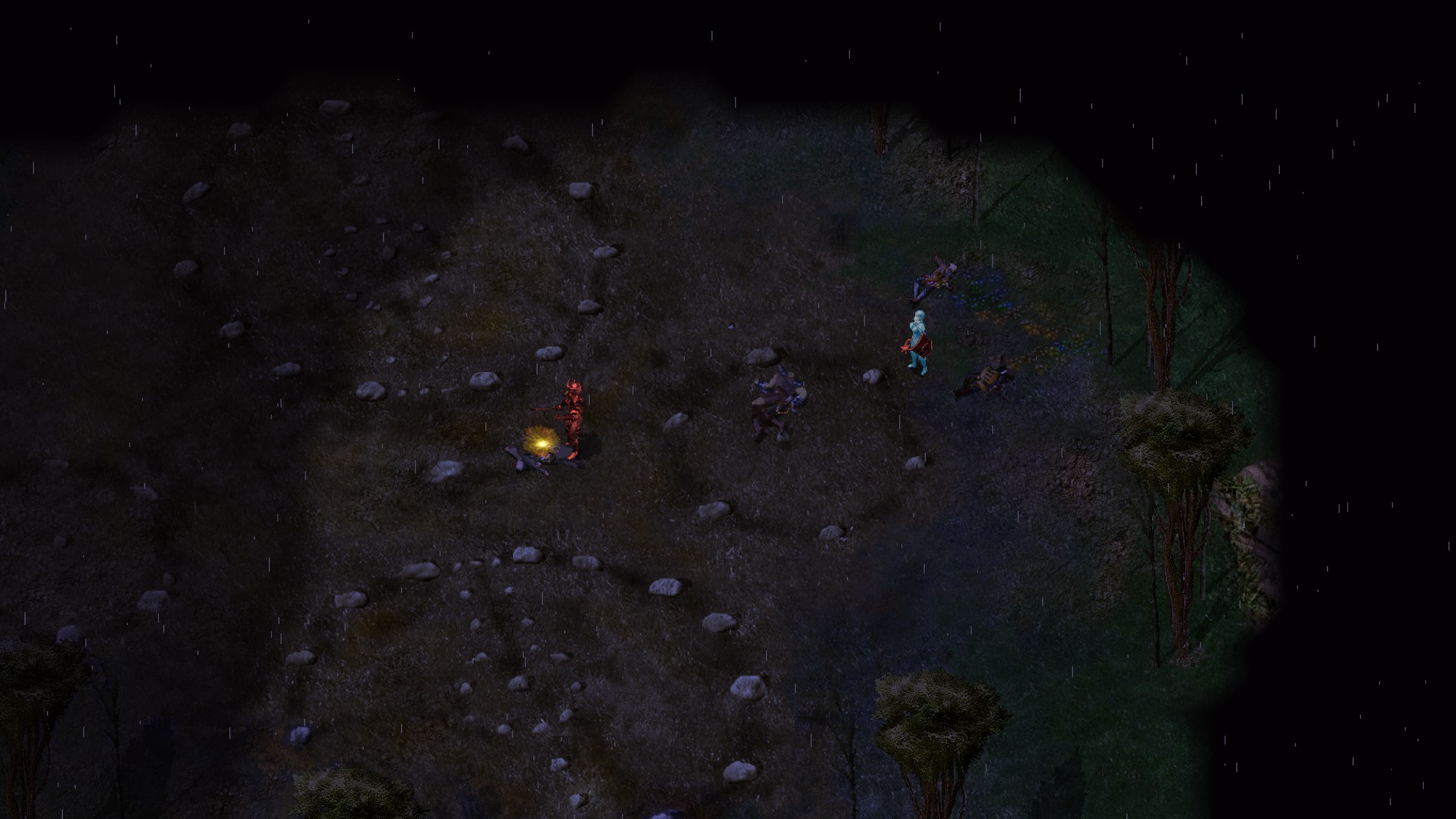 I stayed hidden and the armored figure and priest left, after a time.