This mod is a continuation of Qwinn's original PS:T Unfinished Business, based on version 4.12. It has been completely overhauled and made compatible with Planescape Torment: Enhanced Edition in addition to classic Planescape: Torment.

There are several lines and a readme in need of translation into the following languages: French, Italian, Polish, Russian and Spanish.

Please shoot me a PM (either here or over at SHS Forums) or post in this topic if you're interested.

From Qwinn's original PST-UB Readme:
This WeiDU mod takes the almost-but-not-quite-finished content that shipped with Black Isle's classic Planescape: Torment CRPG, and finishes and polishes it so you can actually see and enjoy the new content in your game. And as you shall soon see, there's quite a bit of it. Version 4.0 of this mod comes with no less than 18 full and non-trivial restorations.

Important: The current patch version of PST:EE (v3.1.3) contains a bug that resets content, such as stores or areas, when you enter the Modron Maze. To work around this issue, it is strongly recommended to download and install Generalized Biffing as the final mod in the mod list.

Note: The mod requires at least WeiDU v243 to be installed correctly. The Windows executable is already included in the mod's zip archive. Linux and macOS binaries can be downloaded here.

3. "Restored More Morte Mortuary Moments"
Restores a bit of dialog for Morte in the Mortuary. Initial dialog is greatly expanded and more in line with the other conversations in the game. Morte will also trigger a couple more conversations, e.g. when approaching Dhaal's Book.

4. "Restored Candlestick Quest"
Restores a quest in the Buried Village.

6. "Restored Pendant of Yemeth Quest"
Restores a quest involving six actors over two different areas, mostly in or near the Smoldering Corpse Bar. To start it, talk to Ratbone in Ragpicker's Square.

7. "Restored Elyce & Company Quest"
Restores Elyce, her brother and her boyfriend to the game, and there is a small quest involved.

10. "Restored Carl Parfidor"
In the original game, you can hire someone to kill Carl Parfidor, but you can never actually meet him. Now you can!

11. "Restored Alley of Dangerous Angles Thugs"
Restores some dialogs and scripts, so that the thugs in the Alley are actually aware of events unfolding around them, will comment on them, and they will no longer be, down to the last man and woman, maniacally obsessed with your 10 copper piece toll.

12. "Restored Morte & Ingress's Teeth Banter"
Restores a very amusing (non-voiced) banter between yourself, Morte and Ingress's Teeth. Before Morte can use the teeth, you will need to use them with Morte nearby.

13. "Restored Items"
Restores the Fiend's Teeth, Spiked Gauntlets, Gauntlets of Rending, the Eye of Vecna, Devil's Due and the Chaos Feather.

14. "Restored Party Comments and Banters"
Restores 27 fully voiced flirts between Morte and female zombies, which can be enjoyed right at the beginning of the game. Also added are 15 new and entertaining fully voiced banters between various PC's, and a new comment by Grace. The component also restores a new soundtrack that is played in the Smoldering Corpse Bar during nighttime. Finally, talking with your party members will now play that character's theme music, including a new track for Morte. PST:EE note: For technical reasons the component does not restore individual NPC feedback when attempting to open locked doors and containers. The same applies to copying scrolls to the spellbook. It will restore a generic sound effect, however.

16. "Restored Lower Ward Encounters"
Restores 9 creatures to the main Lower Ward area, including Hailcin'n, a scarred and tattooed githzerai warrior who wanders in the same general area as Kii'na. Another 6 creatures are placed based on two unused dialog files, representing customers standing around Deran, the slave auctioneer. Another two characters, laborers working on some strange unidentified device, are restored near where Lenny hangs out. Finally, if you give Ki'ina information that causes her to leave the Lower Ward, she will now return about a week later so that you can enjoy the rest of her dialog that was previously inaccessible.

17. "Restored Bestiary Entries"
Restores descriptions for bestiary entries of Annah, Dak'kon, Dhall, Dustmen (both male and female), Grace, Ignus, Lothar, Nordom, Trias and Vhailor. It also adds a new alu-fiend entry for Vrischika, that has been improved to match the other bestiary images. Finally, the bestiary image of the TO will change from a shadowy figure to a glowing version after the Nameless One meets the creature in person.

18. "Restored Lothar's Abode"
Restores guard creatures and some minor treasure to Lothar's abode in the Lower Ward, which are found nowhere else in the game.

19. "Expanded Deionarra's Truth Mod"
This component is not included in "All Recommended PS:T Unfinished Business Components" because it contains a lot more new content than restored content. It adds a great deal of new content (including 180 new lines of dialogue) that will allow the player to find out her fate before it becomes too late to do anything about it. Once the new content has been played, about 30-40 more lines of original dialogue will become accessible.

20. "Restored Item Cheats (Not Recommended)"
This component is also not included in "All Recommended PS:T Unfinished Business Components". It makes two cheat items available to the player and restores their functions: the "Sword of Wh'ynn" - aka "The Cheater's Blade", and "The Tome o' Cheats". Note: PST:EE already comes with a powerful debug console that makes this component largely redundant. 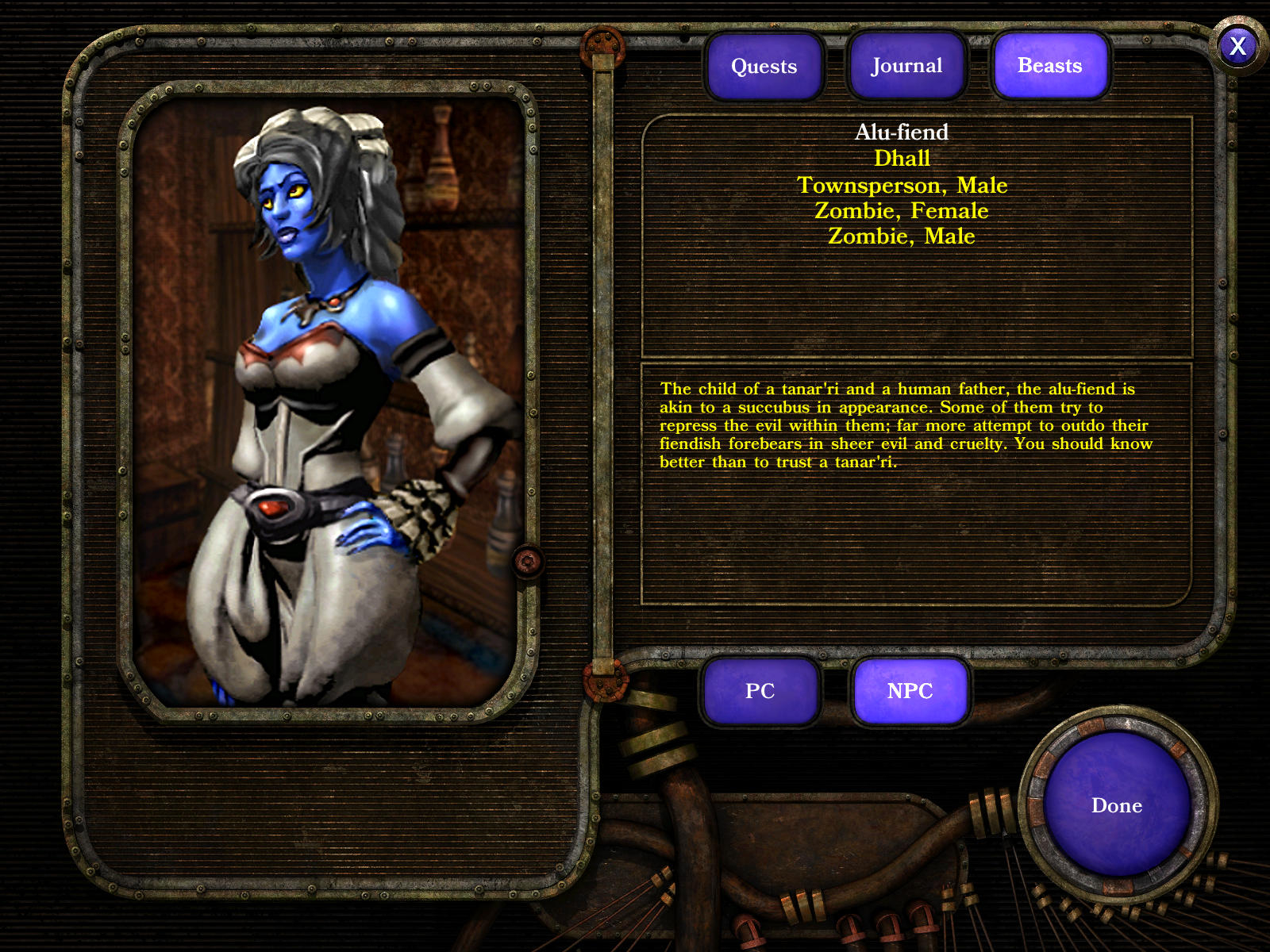