Pillars of Eternity Minimal and No Reload Thread (spoilers)

BelgarathMTH Member Posts: 5,649
October 2015 edited October 2015 in Off-Topic
Hello, friends. I've been inspired to try to start this here. You'd think it would be a thing on Obsidian's official forum, but that whole place seems to be relatively dead. So, I think this idea has the best chance to "take off" here on the BG:EE off-topic forum.

I'm playing a moon godlike paladin. I was wielding a flaming two-handed sword, but I just switched to a gold saber and a shield, as I'm not really seeing the benefit of a 2h sword over a sword and board. Polearms and staves are nice for the extra reach, and I'm looking for a good one of those I can enchant, but my ability to last in melee and use Enhanced Lay on Hands is so good and fast as a paladin built to heal, I think defending myself is the better option. I've managed to save the day with my paladin Watcher several times after Eder fell.

In my current run, which I am going to try to really stick to come heck or high water, I have had two memorable reloads due to my inexperience with the game. The first came when I very stupidly jumped off my climbing rope into Level 5 of the Endless Paths, and killed many elite xaurips, wyrms, and drakes, but finally got swarmed just before I could find the exit back up to Caed Nur. It was so close! The party was felled down to Aloth and Sagani, with only three enemies left. The two of them killed one. But, being squishy as they are, even with heavy armor, they could not finish off the last two elite xaurips before being finished off themselves.

The second reload was on Level 4 of the Endless Paths. I had done a marquis select and had accidentally left Sagani at a hostile entrance. (Or maybe it was a quicksave bug?) Anyway, I wound up with Sagani separated from the rest of my party, and I got swarmed by beetles, trolls, and slimes from three different directions. The moral of the story? Always use the "select all" button, and use marquis select at your own risk, since you are highly likely to leave your ranged squishies behind without noticing until too late.

I've already made a painful mistake in building Aloth as my "mage-thief". I kept putting points into mechanics at the expense of stealth. He is flawless in disarming traps, but he keeps getting spotted and brought down quickly as soon as he disarms floor traps near enemies. His mage half is pretty awesome - damage spells like Fireball are pretty disappointing due to his low Might, but his crippling and disabling has saved the party countless times since I started this run.

Here is a screenie of my party with Level 4 of EP almost complete: 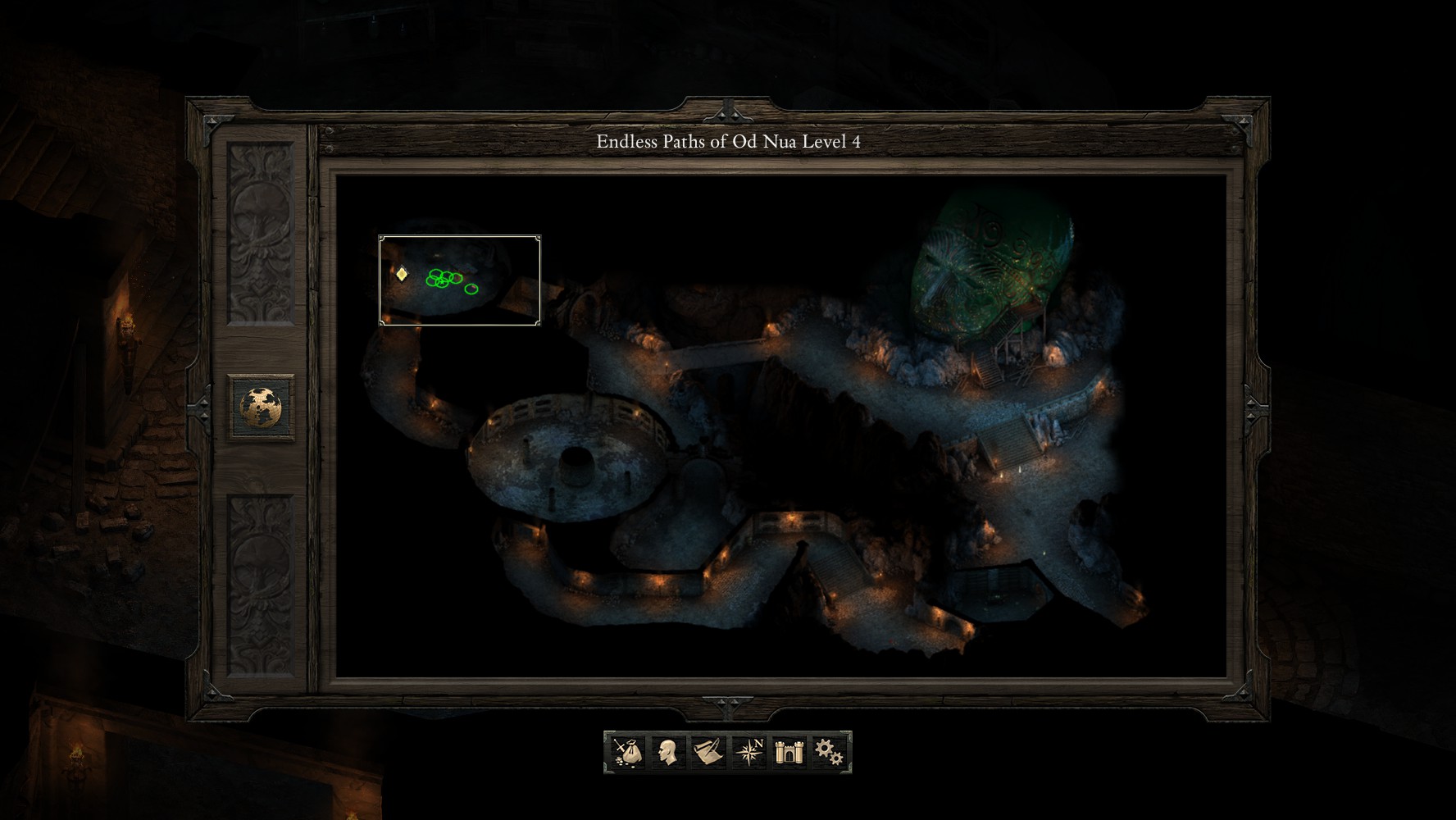 And here's my party getting ready to finish Level 4 and go back to Level 5: 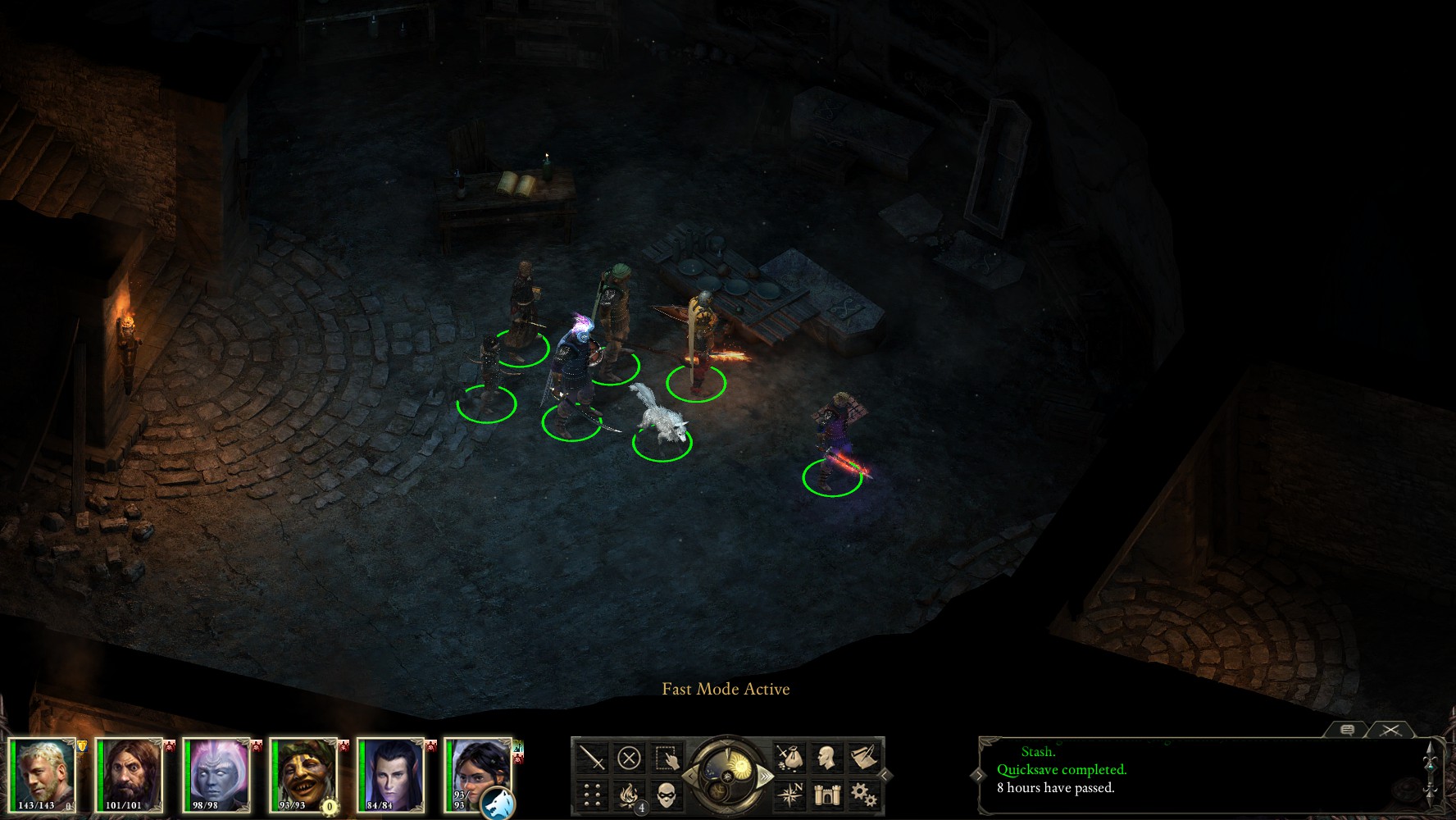 I am still in Act I. I think you can stay in Act I for a long, long time if you choose to do the Endless Paths, but doing so should lead to greater ease for the rest of the game due to greater levels and wealth. I still haven't attacked Raedric. I figure I'll go as far into the Endless Paths as I can before I start to feel like I'm in over my head, then attack Raedric, then finally go on into Defiance Bay and see what the rest of the game has to offer.

Dungeon diving the Endless Paths reminds me of another one of my favorite games, Fate, which led to Torchlight I and II.

I am playing on normal difficulty. I am finding it plenty difficult for minimal or no-reload. I will try to keep a minimal reload counter here from now on.