[Rant] Sad state of the UI and the EEs in general

[WARNING] Bitter ranting ahead. You have been warned.

Beamdog has been working on the infinity engine for at least five years now. And they actually managed to create a worse UI than Black Isle did more than 16 years ago. It's always been a clunky mess, but at least it was functional.

Now, some of the most basic non-combat mechanics of the game either do not work reliably any more or they have become more tedious than ever.

Before you accuse me of whining:
1.) I paid full price for all of Beamdog's IE games. I get to whine.
2.) At least take a look at this stuff first... 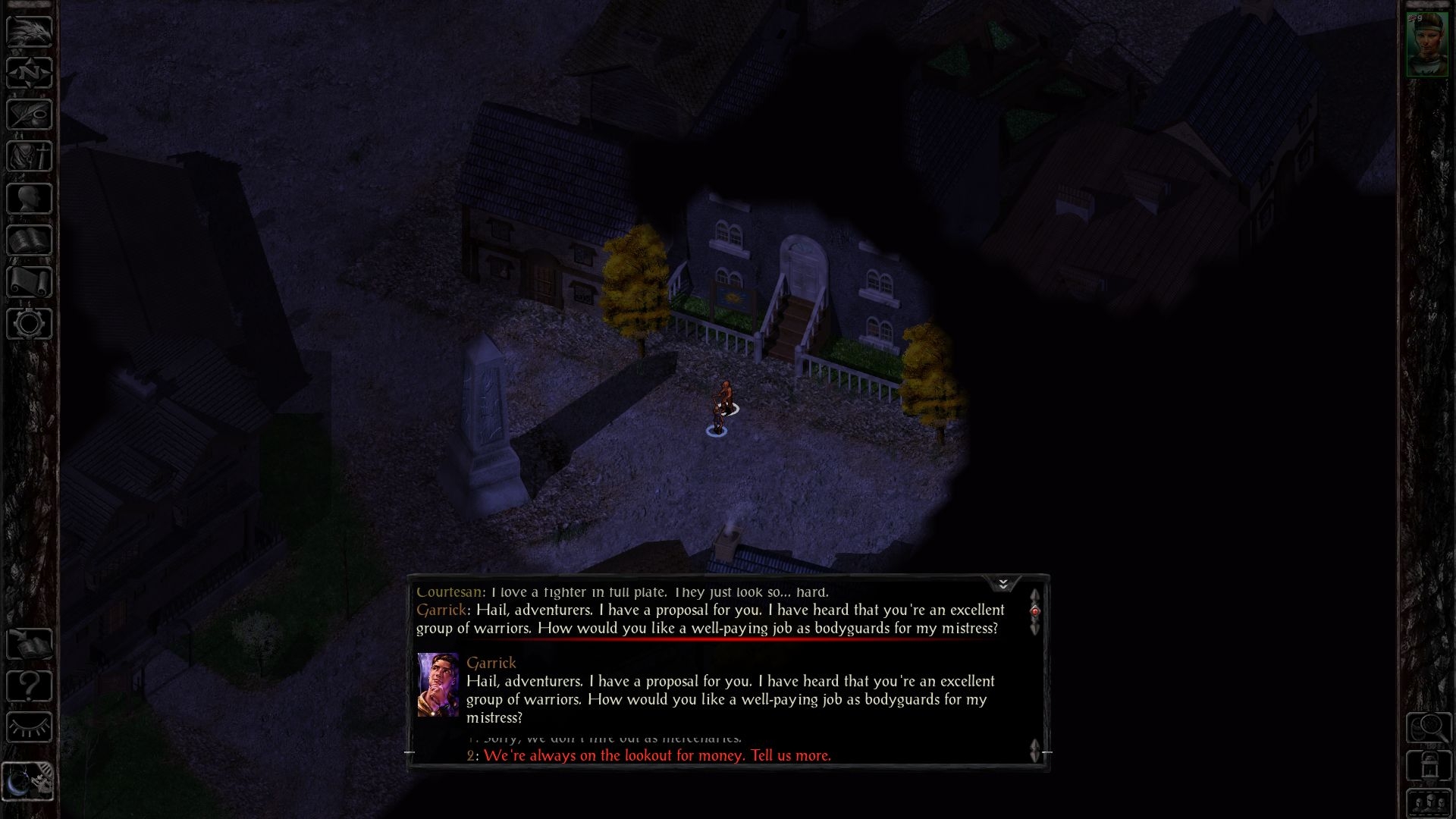 They really only changed two things: They made the NPC's current line unscrollable and they moved the log into a height-adjustable area above that line. This has introduced several serious issues: But wait, they made the dialog box height-adjustable! That'll solve the issues: 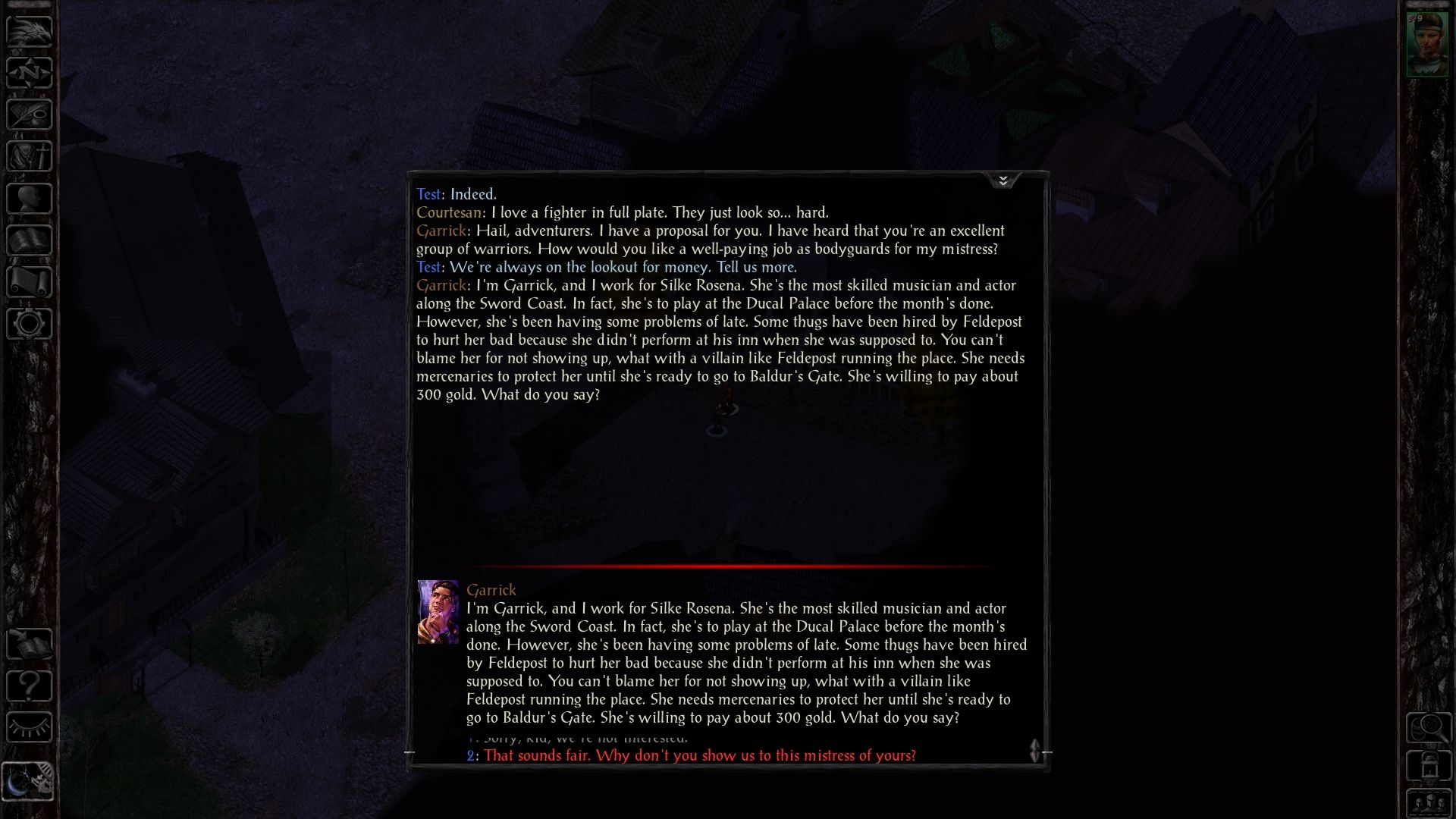 Nope. This is the same crap again. In fact, it's kinda worse. Just took at the amount of wasted screen space!
These dialogs were written for a 640x480 resolution. Today, the game runs in 1080p and higher, yet somehow Beamdog has managed to run out of space. This is so pathetic it's almost impressive.

This is what happens with larger fonts: 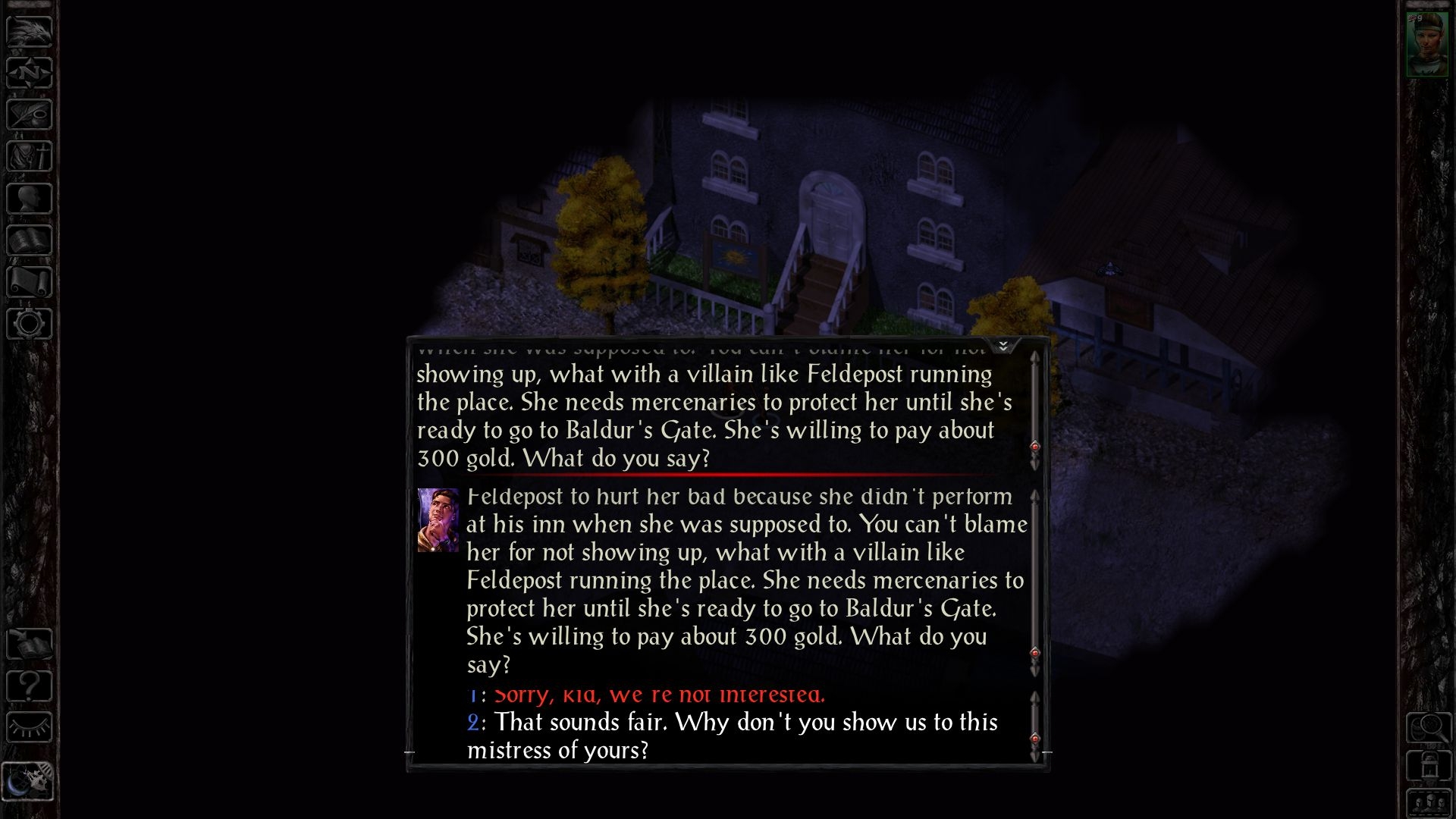 And Garrick isn't the only case:

This weirdness doesn't happen all the time, but it happens often enough to make the game annoying instead of fun.
The point: This should NEVER happen. In fact, this has never happened prior to 2.0+.


Look, I understand what they were trying to do here. It's a neat idea. Just poorly implemented.
Luckily there's an easy fix, and should be no problem for Beamdog to implement.
Simply nest every single line of dialog inside a scrollbar. Then put the new scrollbars into a master scrollbar. Then decrease the width of the dialog box by around half. Don't forget to remove keyboard input, so people don't accidentally select a reponse with the number keys. But make sure that the same button that pauses combat also closes the dialog. Now that would be elegant design! Oh wait, they already did that one...


Joking aside, this stuff actually worked in 1998. With just one scrollbar.
In fact, this stuff works in every other game with dialog. So why not here?

Almost the exact same problem plagues the character record screens. This used to be one screen containing all the relevant information about the selected character. There was one scrollbar.
OK, this one screen wasn't great or anything. You constantly had to scroll that huge text area in search of some minor piece of information. But at least all the information could be found in one place.

For the sake of simplicity™, Beamdog decided to spread this information across five different screens (each with its own scrollbar, naturally).

Neat. Should be really simple to find the information you're looking for now: 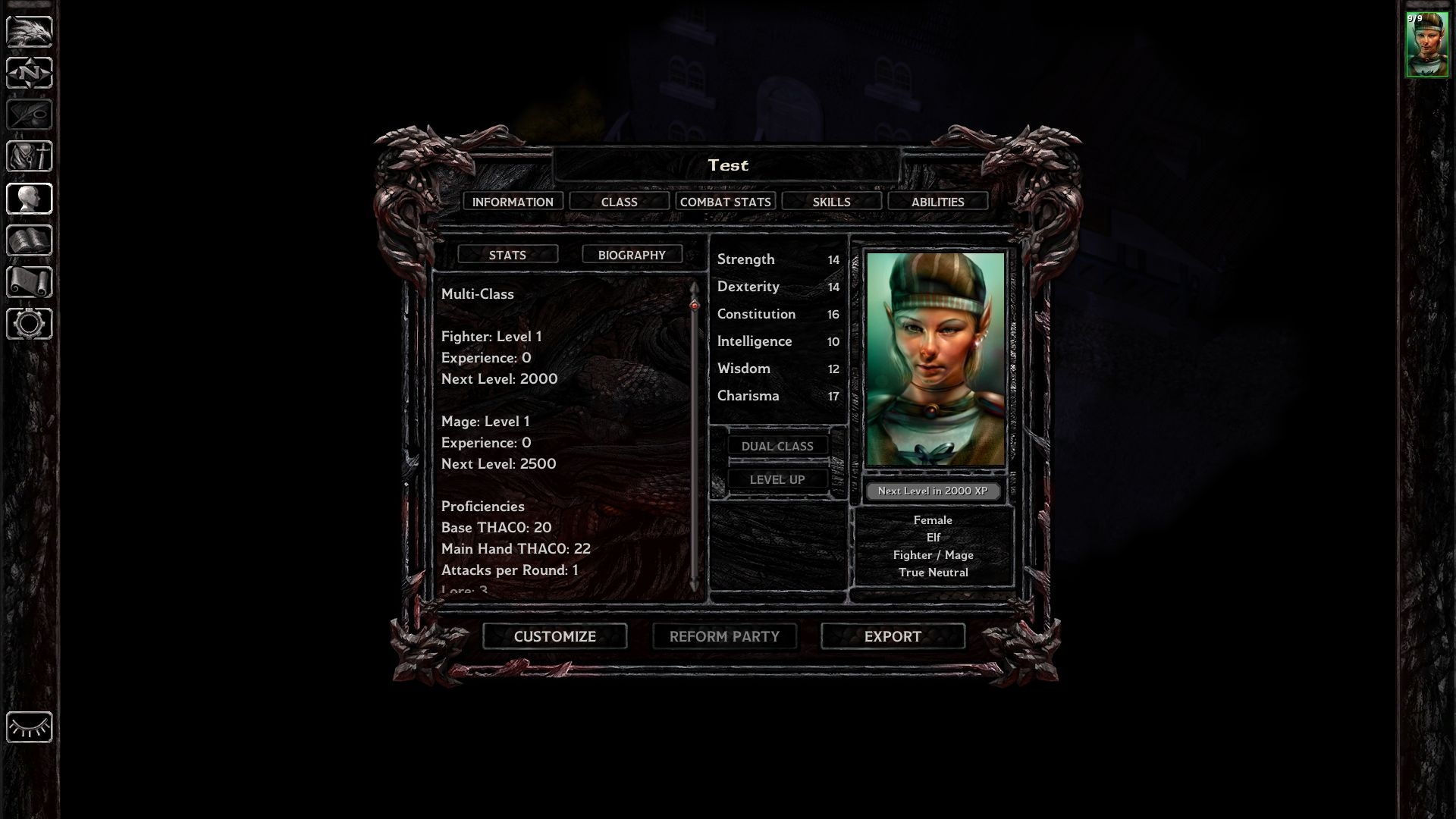 Wait. Where are the HP and AC stats? They used to be here: 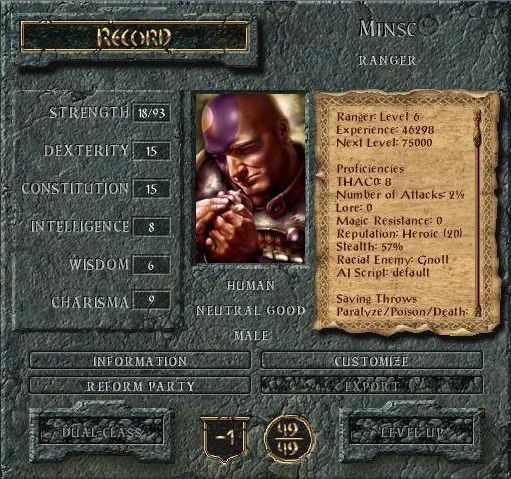 OK, they are listed under "COMBAT STATS". Hmm.
I wonder what the other tabs are for? 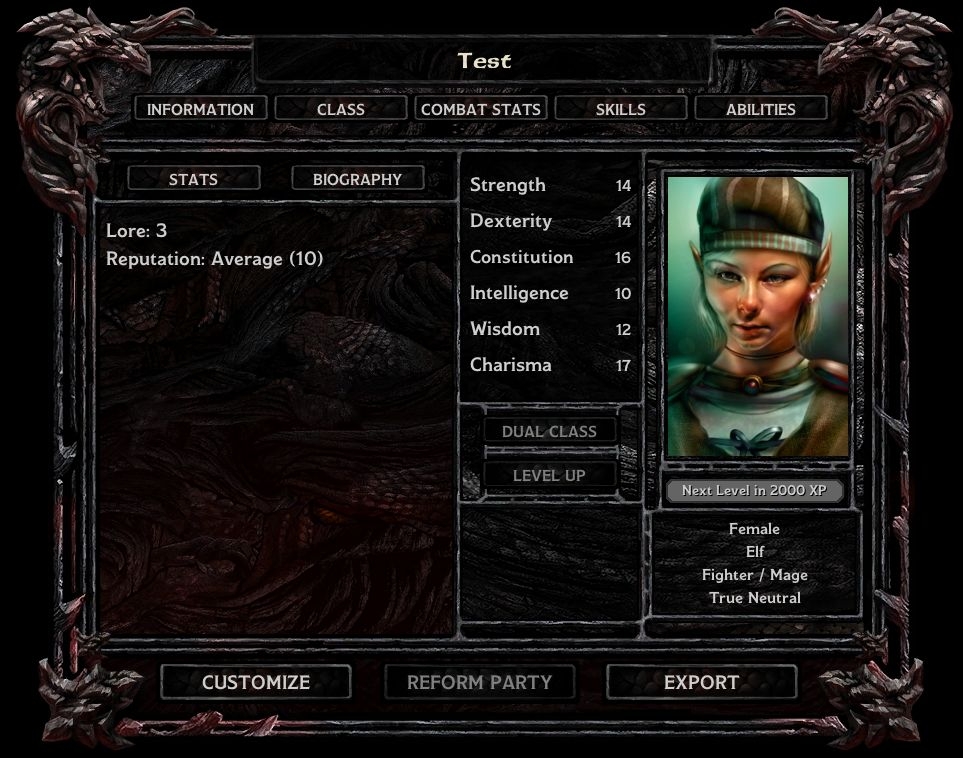 Why would you have a tab for that?! And I guess reputation is a skill now.

Whatever, let's break this down.
"CLASS" used to be called "KIT DESCRIPTION". It was simply repositioned. "INFORMATION" is what the character record screen used to be, except it's worse now (we'll get to that). Hidden among the other three tabs are exactly three pieces of information not listed under "INFORMATION": None of these are crucial. The rest is redundant and repeated mulitple times across several tabs. Your record now tells you in no less than three different locations how much XP you need to level up, your attributes and characteristics, even your portrait, are shown on each tab.
So, by adding those tabs they actually wasted precious screen estate, that could have been used to show relevant stuff like HP and AC on the main page. Sigh...

And then there is this abomination: 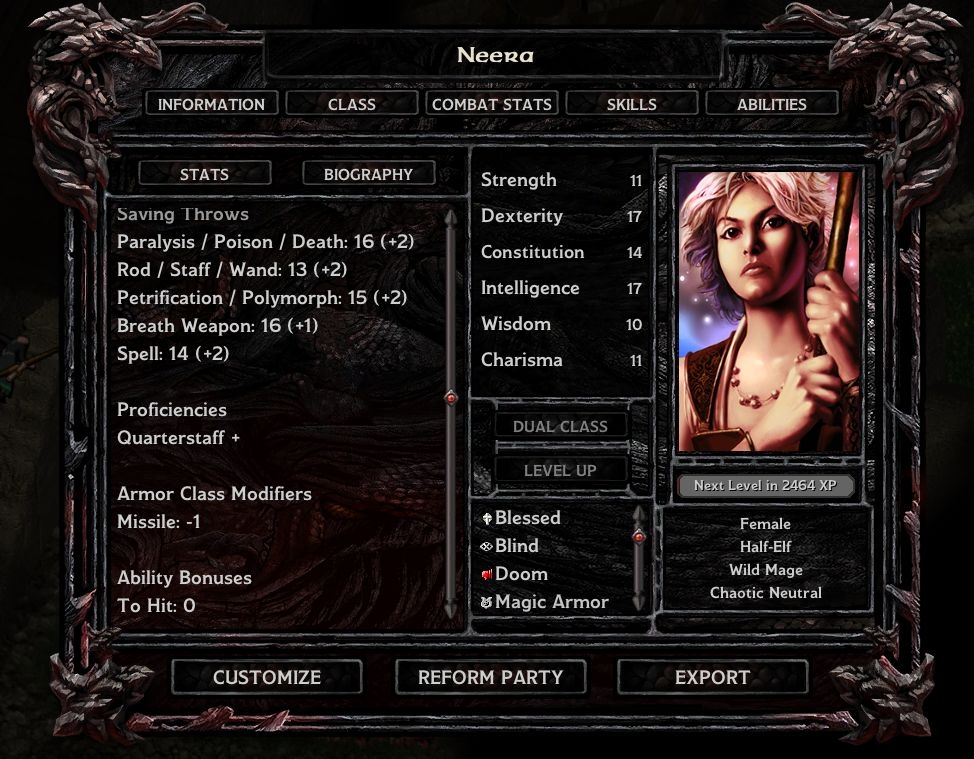 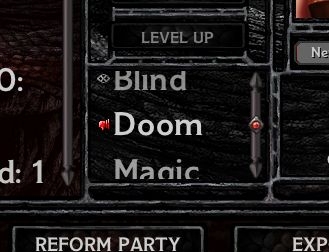 The damn active effects list is nested in a tiny cursor-sensitive scrollbar! OF COURSE!

Someone moderately talented at desinging UIs might have asked themselves (or preferably the players) when and why the record screen is usually accessed.
I don't know about everyone else, but I primarily need it during heavy combat, when lots of magic is happening.
You know, when my characters are affected by dozens of buffs and debuffs. This effects list shows you maybe four of those effects at a time. Good luck finding out if your Chaos Shield is still active, Neera!

This stuff is still as functional as it ever was, but it's so much more tedious to deal with now. The design decisions surrounding this UI "upgrade" are entirely incomprehensible to someone who has actually played these games.

I think when fans heard "UI Improvements" they were hoping for something different.

What really gets me is how trivial it should be for Beamdog to meaningfully improve the UI.
Yes, sifting through decades old pre-OO code is a nightmare. But Beamdog has had five years with this engine now. They should be able to make it do whatever they can dream up at this point.

Here are some things I would want from a UI upgrade:

Many of the design decisions surrounding the new UI are questionable at best, haphazard on average and outrageously incompetent at worst.

I had hoped that patch 2.3 would finally fix the issues introduced in 2.0, but so far nothing has improved.
Four years ago I was giddy to see what Beamdog might do with the engine. At this point I have to question why they even decided to upgrade the unholy mess that is the infinity engine if this is the result. I wonder if writing an engine clone up to modern standards would have proved more viable in the long run. Because the way it's looking right now, the current EEs are gonna need another EE in a few years, at the latest when OpenGL 2.0 will no longer be supported by modern GPUs. (Not to mention that some mods just fail to work on an engine level since 2.0).

There are a few improvements since 1.3. The spellbook is more practical, I guess. The journal is... interesting. The map is... not worse. (OK, I could have done without any of these)
The most positive update is of course the new UI modding system. Frankly, however, none of the mods created with it that I have seen have meaningfully addressed the above issues. ETA: And even though mods can help fix these issues, they shouldn't have to.

But all is not bad and I do apologize for the negative and snobby tone. I don't regret purchasing the EEs. I would do it again in a heartbeat.
I'm just frustrated about them still being so broken in so many ways. And dissapointed about them not being so much better than they should be after all this time.